Something was (is?) Rotten at Foggy Bottom

Ana Belen Montes spied for decades at the Defense Intelligence Agency for the Cuban regime and Walter Kendall Myers for 30 years did the same at the State Department despite Cuba's status as a state sponsor of terrorism. 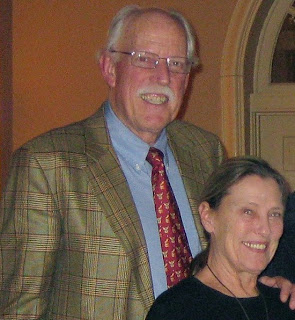 WASHINGTON -- Walter Kendall Myers, a former State Department official, and his wife, Gwendolyn Steingraber Myers, have been sentenced to life in prison without the possibility of parole and 81 months in prison, respectively, for their roles in a nearly 30-year conspiracy to provide highly-classified U.S. national defense information to the Republic of Cuba.

On Nov. 20, 2009, defendant Kendall Myers, 73, aka “Agent 202,” pleaded guilty to a three-count criminal information charging him with conspiracy to commit espionage and two counts of wire fraud. His wife, Gwendolyn Myers, 72, aka “Agent 123,” and “Agent E-634,” pleaded guilty to a one-count criminal information charging her with conspiracy to gather and transmit national defense information. The defendants, both residents of Washington, D.C., were arrested on June 4, 2009, by FBI agents and have remained in custody ever since.

Both defendants have agreed to the entry of a monetary judgment against them in the amount of $1,735,054. The assets that will be forfeited to the government towards satisfaction of that judgment include the proceeds from the sale of the defendants’ apartment and vehicle, and various bank and investment accounts.

“For nearly 30 years, this couple proudly committed espionage on behalf of a long-standing foreign adversary. Today, they are being held accountable for their actions. Their sentences should serve as a clear warning to others who would willingly compromise our nation’s most sensitive classified information,” said David Kris, Assistant Attorney General for National Security.

“Kendall and Gwendolyn Myers were brought to justice not because they were careless, but because of an extremely well-planned and executed counterintelligence investigation that required the unprecedented cooperation of multiple agencies of the U.S. government tasked with protecting our national security,” said Ronald C. Machen Jr., U.S. Attorney for the District of Columbia. “Others like the Myers who are presently betraying the trust that this country has placed in them should know that they are not safe from prosecution regardless of how careful they think they are being. As with Kendall and Gwendolyn Myers, they will be caught and brought to justice.”

Shawn Henry, Assistant Director of the FBI’s Washington Field Office, said: “The Myers made a conscious decision to betray the United States and its citizens. The FBI, along with its partners in the U.S. Intelligence Community, will continue to aggressively pursue anyone who seeks to cause the same harm.”

“Walter Kendall Myers betrayed his country. By committing acts of espionage Myers grievously violated the confidence placed in him by the U.S. Department of State and the American people. Today, he has been rightfully sentenced for crimes against our nation,” said Assistant Secretary for State for Diplomatic Security Eric J. Boswell.

According to the sentencing memorandum, plea agreements and other documents filed in court by the United States:

Kendall Myers began working at the State Department in 1977 as a contract instructor at the Department’s Foreign Service Institute (FSI) in Arlington, Va. After living briefly with Gwendolyn in South Dakota, he returned to Washington, D.C., and resumed employment as an instructor with FSI. From 1988 to 1999, in addition to his FSI duties, he performed work for the State Department’s Bureau of Intelligence and Research (INR). He later worked full-time in INR and, from July 2001 until his retirement in October 2007, was an intelligence analyst for Europe in INR where he specialized on European matters and had daily access to classified information through computer databases and otherwise. He received a “Top Secret” security clearance in 1985 and, in 1999, received access to “Sensitive Compartmental Information.”

Gwendolyn Myers moved to Washington, D.C., in 1980 and married Kendall Myers in May 1982. She later obtained employment with a local bank as an administrative analyst and later as a special assistant. Gwendolyn Myers was never granted a security clearance by the U.S. government.

In December 1978, while an employee of the State Department’s FSI, Kendall Myers traveled to Cuba after being invited by a Cuban government official who had made a presentation at FSI. That Cuban official was an intelligence officer for the Cuban Intelligence Service (CuIS). This trip provided CuIS with the opportunity to assess or develop Myers as a Cuban agent. Myers kept a diary of his two-week trip to Cuba in which he explicitly declared his affinity for Fidel Castro and the Cuban government. The diary was recovered by the FBI in the investigation.

In 1979, Kendall and Gwendolyn Myers were visited in South Dakota by the same Cuban intelligence officer who had invited Kendall Myers to Cuba. During the visit, the Cuban intelligence officer recruited both of them to be clandestine agents for Cuba, a role in which they served for the next 30 years. Their recruitment by CuIS as “paired” agents is consistent with CuIS’s past practice in the United States. Afterwards, CuIS directed Kendall Myers to pursue a job at the State Department or the CIA to gain access to classified information. Kendall Myers, accompanied by his wife, returned to Washington, D.C., where he pursued a position at the State Department.

According to the court documents, in April 2009, the FBI launched an undercover operation against the pair. Kendall and Gwendolyn Myers met four times with an undercover FBI source, on April 15th, 16th and 30th, and on June 4, 2009. The meetings were all video- and audio-taped.

During the meetings, Kendall and Gwendolyn Myers made a series of statements about their past activities on behalf of CuIS, including how they used code names and how they had transmitted information to their CuIS handlers through personal meetings, “dead drops,” “hand-to-hand” passes, and in at least one case, the exchange of shopping carts in a grocery store. The couple also stated that they had traveled to meet Cuban agents in Trinidad and Tobago, Jamaica, Mexico, Brazil, Ecuador, Argentina and other locations.

When asked by the undercover FBI agent if he had ever transmitted information to CuIS that was classified higher than “Secret,” Kendall Myers replied, “oh yeah…oh yeah.” He said he typically removed information from the State Department by memory or by taking notes, although he did take some classified documents home. Gwendolyn Myers admitted she would process the classified documents at home for delivery to their CuIS handlers. In the final meeting with the FBI source, Kendall Myers disclosed “Top Secret” national defense information related to sources and methods of gathering intelligence. He also admitted that he had previously disclosed the information to CuIS.

The admissions by Kendall and Gwendolyn Myers were corroborated by other evidence collected in the investigation. The FBI seized a shortwave radio in their apartment and confirmed overseas trips by the couple that corresponded to statements they made. The FBI also identified encrypted shortwave radio messages between CuIS and a handler for the couple that were broadcast in 1996 and 1997.

Furthermore, an analysis of Kendall Myers’ State Department computer revealed that, from August 22, 2006, until his retirement on Oct. 31, 2007, he viewed more than 200 intelligence reports concerning the subject of Cuba. Of these reports concerning Cuba, the majority was classified and marked “Secret” or “Top Secret.” The FBI also located handwritten notes by Kendall Myers reflecting the gathering and retention of “Top Secret” information which he intended to provide the CuIS, but never did.

Finally, since at least 1983 and until 2007, Kendall Myers made repeated false statements to government investigators responsible for conducting background investigations which determined his continued suitability for a “Top Secret” security clearance. By not disclosing his and his wife’s clandestine activity on behalf of CuIS and by making false statements to the State Department about their status as clandestine Cuban agents, he defrauded the United States whenever he received his government salary. Based on these false representations and promises, Kendall Myers obtained at least $1,735,054 in salary from the U.S. government for the benefit of him and his wife.

This investigation was conducted jointly by the FBI’s Washington Field Office and the State Department’s Bureau of Diplomatic Security. The prosecution was handled by Assistant U.S. Attorney G. Michael Harvey, from the U.S. Attorney’s Office for the District of Columbia, and Senior Trial Attorney Clifford I. Rones, from the Counterespionage Section of the Justice Department’s National Security Division.