His Holiness the 14th Dalai Lama in Miami

A visit from the Tibetan Exile to the Cuban Exile Quarter 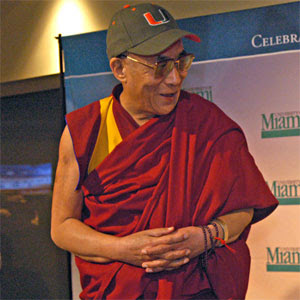 The Dalai Lama visited Miami, Florida last week and spoke at Florida International University on the significance of world religions and at the University of Miami he spoke about the quest for happiness in challenging times. Both lectures are archived online and available for listening.

These are challenging times not only for Tibet but for human rights activists everywhere. In May of 2010 Amnesty International issued an urgent action for Tibetan scholar Tagyal describing him of being at "high risk of torture and mistreatment." Thanks to the world's attention he was released on bail on October 14, 2010. Sadly, these examples of international solidarity are not repeated often enough. For example when the UN Secretary General Ban Ki-moon fails to mention the plight of prisoner of conscience and Nobel Prize winner Liu Xiaobo and human rights in general in China while meeting with the regime leadership what kind of message is he sending?

Yet the principles of nonviolent resistance to evil espoused by Mohandas Gandhi over a century ago are today taught by moral exemplars such as His Holiness the 14th Dalai Lama
who on twitter observes that "Living a truly ethical life, putting the needs of others first and providing for their happiness, has tremendous implications for society," and that "Compassion and love constitute non-violence in action."