"A dazzling performer of many genres of Afro-Caribbean music, Celia Cruz (1925-2003) had a powerful contralto voice and a joyful, charismatic personality that endeared her to fans from different nationalities and across generations. Settling in the United States following the Cuban revolution, the “Queen of Salsa” performed for more than five decades and recorded more than 50 albums." United States Postal Service, December 28, 2010 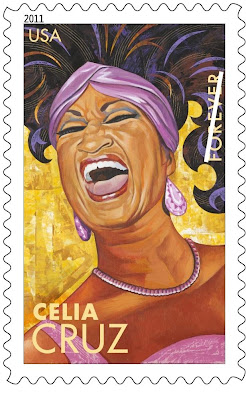 Celia Cruz born in Havana, Cuba as Úrsula Hilaria Celia de la Caridad Cruz Alfonso was one of the most successful Salsa performers of the 20th century, with twenty-three gold albums to her name. She was renowned internationally as the "Queen of Salsa" as well as "La Guarachera de Cuba". She spent most of her career living in , and working in the and several Latin American countries. 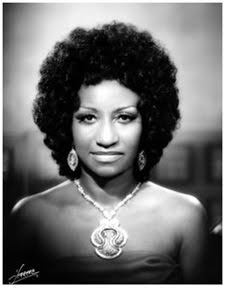 Celia Cruz
She was a nonperson in Cuba. Celia Cobo of Billboard Magazine once said "Cruz is indisputably the best known and most influential female figure in the history of Cuban music." At the time of her death the Associated Press reported:

Celia Cruz is being honored by the U.S. Postal Service along with four other Latin Music Legends: Selena, Carlos Gardel, Carmen Miranda and Tito Puente for their lasting impact on American music.

Unfortunately, in her native Cuba the communist regime has done everything possible to convert her and other musicians, such as Olga Guillot, into non-persons banning and censoring their music. This has been so extreme that according to the book Shoot the singer!: music censorship today edited by Marie Korpe there is increasing concern within the international music community that post-revolution generations are growing up without knowing or hearing these censored musicians and that this could lead to a loss of Cuban identity in future generations.

Below are two performances of Celia Cruz together with Tito Puente in remembrance of these two great artists that are no longer with us: