Another Empty Chair: 2010 Sakharov Prize for Freedom of Thought 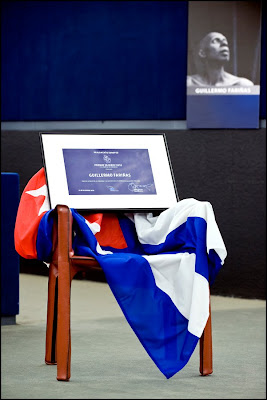 Cuban dissident Guillermo Fariñas, this year's winner of the European Parliament's Sakharov Prize for Freedom of Thought, had to be represented by an empty chair at the prize award ceremony on Wednesday as he did not receive permission to leave his country and travel to Strasbourg to receive the prize.

"The Sakharov Prize is the trademark of the European Parliament in the fight for human rights all over the world. The empty chair for this year's laureate Guillermo Farinas is the best example of how important this fight is", added the president.

Catherine Ashton, the High Representative of the Union for Foreign Affairs and Security Policy and Vice-President of the Commission, made today the following statement:

"I would like to congratulate Guillermo Farinas on receiving the 2010 Sakharov Prize from the European Parliament in the name of all those who fight in Cuba for greater freedom and human rights. I regret that he has not been able to travel to Strasbourg to receive his prize in person.

Addressing MEPs in a recorded message, Mr Fariñas expressed his gratitude to the European Parliament "for not abandoning the Cuban people in these more than 50 years of the struggle for democracy". He explained that he had accepted the Sakharov Prize for the Freedom of Thought "because I feel myself to be a tiny part of the rebellious spirit that nourishes the people I am proud to belong to."

Mr Fariñas criticised the government in Havana, saying "Unluckily for those who misgovern us in our own homeland the fact that I cannot leave and return voluntarily to the island where I was born is, in itself, the most irrefutable witness to the fact that unfortunately, nothing has changed in the autocratic system ruling my country."

He called on MEPs "not allow themselves to be deceived by the siren songs of a cruel regime practising 'wild communism'" when analysing EU policy towards Cuba. According to Mr Fariñas, a change of direction in these relations should only occur if the following five pre-conditions are met:

A doctor of psychology and a journalist, 48-year-old Guillermo Fariñas has denounced the Castro regime. He is the founder of "Cubanacán Press," an independent press agency aimed at raising awareness of the fate of political prisoners in Cuba.

Mr Fariñas has spent years in confinement and has gone on hunger strike 23 times so far as a non-violent means of fighting oppression in Cuba. His efforts to secure free internet for all earned him a Reporters Without Borders Cyber-Freedom Prize in 2006.

In July 2010, Mr Fariñas nearly died after a five-month-long hunger strike he began on 24 February, following the death of Orlando Zapata Tamayo, a fellow political activist who passed away after 80 days of hunger strike. He ended the strike after the Cuban government gave in to his plea and released 52 political prisoners.

Guillermo Fariñas is the third winner from Cuba to receive the €50,000 prize, after Oswaldo José Payá Sardiñas in 2002 and Ladies in White in 2005.

Empty chair ceremony - not the first time in the European Parliament

This is not the first time that the Sakharov Prize has been awarded in the absence of the laureate. In 2008 China's most prominent human rights activists, Hu Jia, was also not able to take part in the ceremony as he was incarcerated, but a video message from his wife Zeng Jinyan was played to MEPs. For other winners, such as Aung San Suu Kyi in 1990 and Damas de Blanco (Ladies in White) in 2005, close family members or representatives took part in the ceremony but up to now the winners have still not received the prize in person. 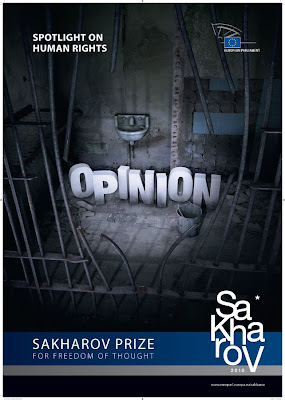 The Sakharov Prize for Freedom of Thought, named in honour of the Soviet physicist and political dissident Andrei Sakharov, has been awarded by the European Parliament every year since 1988 to individuals or organisations who have made an important contribution to the fight for human rights or democracy.