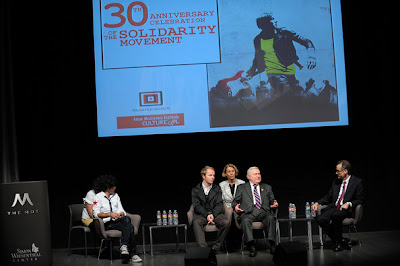 What are these artists, activists and political leaders celebrating? After decades of brutal repression and horrible labor conditions Polish workers were able to finally organize a labor union in 1980 and forced the communist regime to recognize it following a prolonged labor strike. This labor union, Solidarity, is still active today in a free and democratic Poland that it made possible with its courageous actions 30 years ago.

Taken from the Solidarity website is a brief breakdown of what took place in 1980: 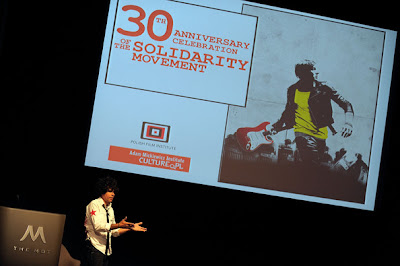 Now you might ask yourself what is a Cuban punk rocker doing in the middle of all this? How did he wind up speaking at the Museum of Tolerance in Los Angeles? 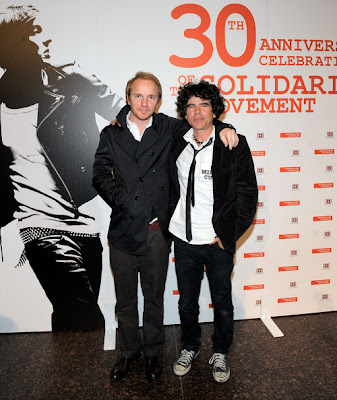 The event was organized by the Adam Mickiewicz Institute and the Polish Film Institute to mark the 30th anniversary of Solidarity and takes its motto – ‘How to overthrow a totalitarian regime using a home-made amplifier’ – from the subtitle to the documentary film Beats of Freedom, which shows the history of Polish rock music under communism and its role in the struggle for freedom.

Beats of Freedom trailer
The screening of the film’s abbreviated version will be followed by a panel with the participation of Jacek Borcuch, the director of All That I Love, the Polish candidate for an Oscar nomination in the Best Foreign Film category.

Beats of Freedom Part 1/8
Its promotional campaign is in the hands of the Los Angeles-based company Block Korenbrot and is held under the motto ‘Poland 1981. Solidarity is on the move. Every movement begins with its own sound’.

Jacek Borcuch's All That I Love also deals with the impact of punk rock music and Solidarity in the 1980s but is a fictional account with a Romeo and Juliet romantic subplot.

Wszystko, co kocham - zwiastun (All that I love - trailer)

According to youtube site with an interview of the "Polish actor-turned-director Jacek Borbuch dove into his own memories to write his second feature, All That I Love, shown in competition at the Brussels Film Festival. The film follows the life of a teenage punk musician in Poland in the early 1980s, when Martial Law was imposed by the government and social rebellion against the communist regime was beginning to rise." 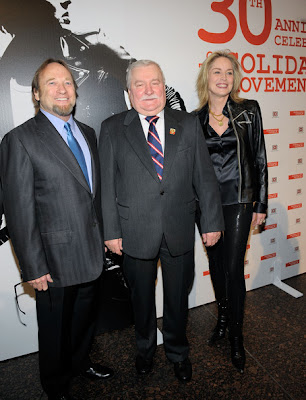 (L-R) Musician Stephen Stills, former Polish President Lech Walesa and actress Sharon Stone attend the 30th Anniversary of Solidarity celebration in Los Angeles at the Museum Of Tolerance on December 15, 2010*
Thanks to international solidarity and no doubt a lot of arm twisting the front man of 'Porno para Ricardo' was able to travel outside of Cuba. Now the question remains: "Will he be able to return to the island?" As was the case the last time it all depends on all of us remaining vigilant and assisting Gorki Aguila the next time he asks us for help to the best of our ability. 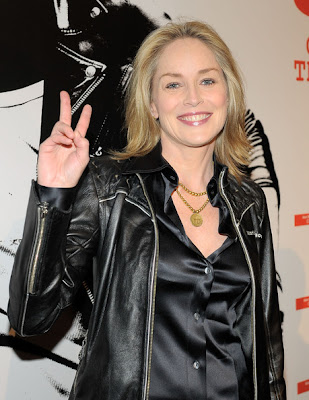 Thank you to whomever thought up of the idea to invite Gorki to celebrate the founding of Solidarity with an act of solidarity with the Cuban people. 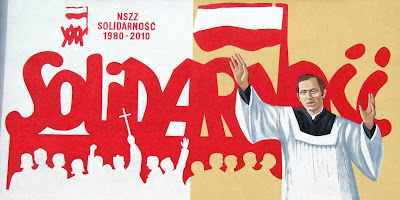 *(All photos were taken in L.A. by Charley Gallay/Getty Images North America)
Posted by John Suarez at 9:39 PM