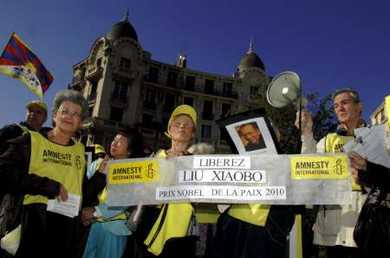 Amnesty International is today calling on the Chinese government to end its intensifying crackdown on Chinese human rights activists ahead of the Nobel Peace Prize awards ceremony in Oslo on 10 December.

Nobel Laureate Liu Xiaobo is currently serving an 11-year sentence for “inciting subversion of state power" for his part as the leading author behind “Charter 08”, a manifesto calling for the recognition of fundamental human rights in China.

Liu Xiaobo has consistently maintained that the sentence violates both China's own constitution and basic human rights, but, like many others in China who have chosen to speak out, he has been severely punished.

He is just one of thousands of political prisoners and prisoners of conscience currently being held in China. Among the recent cases that Amnesty International has highlighted are:

“The Chinese government should release Liu Xiaobo and all the other prisoners of conscience,” said Salil Shetty. “They should uphold internationally recognised human rights standards, many of which are enshrined in their own constitution.”

The recent crackdown also coincides with a concerted campaign by Chinese authorities to disrupt the Nobel awards ceremony.

Nobel rules require the winner or his or her immediate family to personally accept the prize. Liu Xiaobo’s enforced absence means that for the first time since 1938, the peace prize will not be awarded at the ceremony.

Liu Xiaobo’s wife, Liu Xia, could have collected the award for him, but she has been detained by Chinese authorities and is currently under house arrest in Beijing. She is unable to move about freely and has not been allowed to be in contact with friends or family for nearly two months.

Chinese authorities have also pressured other countries to boycott the ceremony. However, despite a campaign of political and economic pressure, only 18 countries have declined the invitation to the ceremony.

“The Chinese government should be celebrating this global recognition of a Chinese writer and activist,” said Salil Shetty. “Instead, the government’s very public tantrum has generated even more critical attention inside and outside China – and, ironically, emphasized the significance of Liu Xiaobo’s message of respect for human rights.”