My definition of a free society is a society where it is safe to be unpopular. ~Adlai Stevenson 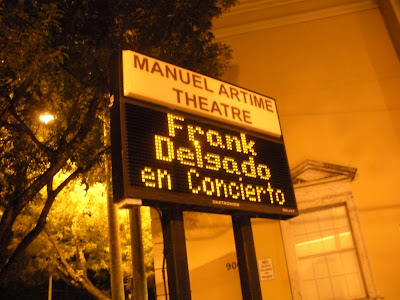 Frank Delgado returns to Miami to play the Manuel Artime Theater this Sunday, after playing his last concert here in 2000. He was interviewed and played some of his music on MegaTV in the program "Esta Noche Tu Night" just days before the concert.

Freedom of expression both artistic and political were on display Sunday night both inside and outside of the Theater. Prior to the start of the concert there was a demonstration across the street from the Manuel Artime Theater. 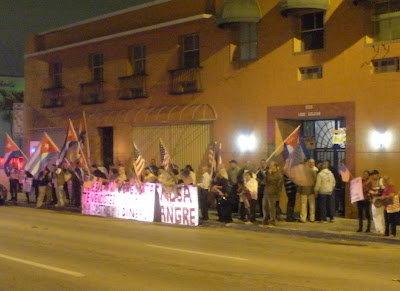 Demonstrators protesting cultural exchanges with Cuban dictatorship
The concert was streamed live (although the sound was horrible) one could still make out that Delgado ran through his repertoire with an enthusiastic audience that already knew the words. Nueva onda Cuba reported that Frank Delgado estimated his audience at 400 but Nueva Onda said it was probably more. Here are some of the songs he is best known for: "La Otra Orilla" from Sunday night and the video "Mi Mapa" with the lead actor now in exile.

The lyrics in many of his songs offer a critical appraisal of the reality on the ground in the island most likely reflecting popular frustrations with the regime, but some like "Mi Mapa" are just well written ballads.

Contrast this with how the Cuban regime operates according to the book Shoot the singer!: music censorship today edited by Marie Korpe there is increasing concern within the international music community that post-revolution generations in Cuba are growing up without knowing Cuban musicians who left permanently after the revolution who are heavily censored by the regime and that not hearing these censored musicians could lead to a loss of Cuban identity in future generations. 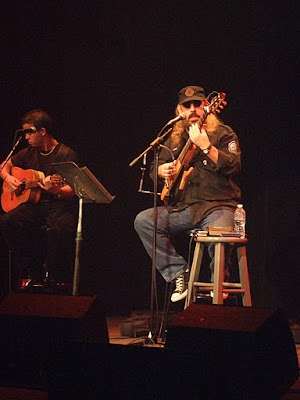 *With apologies to Charles Dickens.