Will you stand with them for human rights?

"When bad men combine, the good must associate; else they will fall one by one, an unpitied sacrifice in a contemptible struggle." - Edmund Burke, Thoughts on the Cause of Present Discontents (1770)

Today, December 10, 2010 is International Human Rights Day and also the day that the Nobel Peace Prize is Awarded to imprisoned Chinese dissident Liu Xiaobo. The Nobel Prize Award Ceremonies for Liu Xiaobo will be webcast live today, Friday, December 10 beginning at 1:00 p.m. CET [7:00am EST] and will continue at 4:30 p.m. CET. [10:30am EST].

Yesterday, December 9, in Havana the Ladies in White, a group of women whose loved ones are prisoners of conscience who silently march and attend Mass dressed in white in an effort to obtain their freedom, gathered at the home of Laura Pollán and began walking towards the monument to Martin Luther King Jr. in Havana with white gladiolas and copies of the Universal Declaration of Human Rights when they were assaulted and beaten up by a government organized mob reported EFE newswire and EuropaPress. 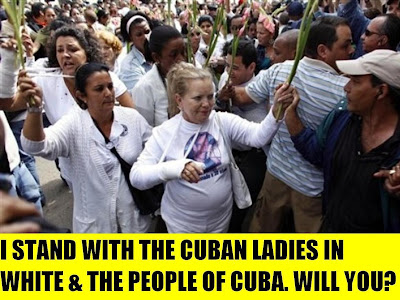 As the year draws to a close it is an important moment to look back. 2010 has been a rough year for human rights around the world. Especially so in Cuba. In January of 2010 the Cuban regime had to admit that over 20 mental patients had died from exposure at the Psychiatric Hospital known as Mazorra due to the criminal negligence of the hospital staff after Cuban dissidents made known the deaths. A month later after prolonged beatings and both psychological and physical torture during which Amnesty International prisoner of conscience Orlando Zapata Tamayo had to defend himself by engaging in a water-only hunger strike only to have the water denied him by prison officials for over two weeks contributing to his death on February 23, 2010. 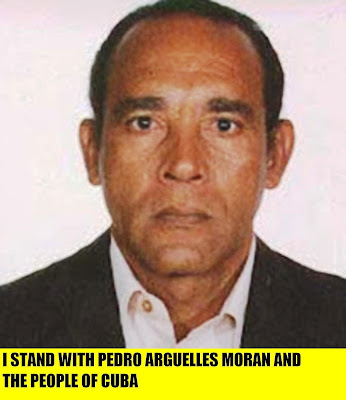 Following Orlando Zapata's death the Cuban dictatorship launched a campaign to destroy his memory and in the process has engaged in and continues to wage a campaign of slander and psychological warfare against the family that on numerous occasions throughout 2010 also resulted in unprovoked physical violence against Orlando's mother, Reina Luisa Tamayo, and the rest of the family. In early November the Miami Herald reported that Reina Luisa Tamayo "was repeatedly hit on the head, thrown to the ground and gagged with a smelly rag that left her breathless," by Cuban state security agents, one of which told her to "Shut up, you lousy black." 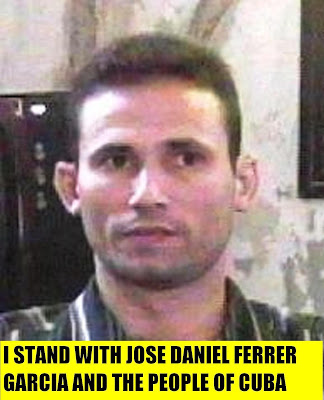 In March of 2010 on the seventh anniversary of the Cuban Black Spring when the Ladies in White marched for seven days demanding their imprisoned loved one's freedom they were subjected to both verbal harassment and physical assaults so severe that some of the women suffered broken bones. These non-violent activists refused to back down and continued marching. Laura Pollán, a Lady in White while marching and facing violent repression responded: They can either kills us, put us in jail or release them. We will never stop marching no matter what happens. Her husband is prisoner of conscience Hector Maseda Gutierrez. 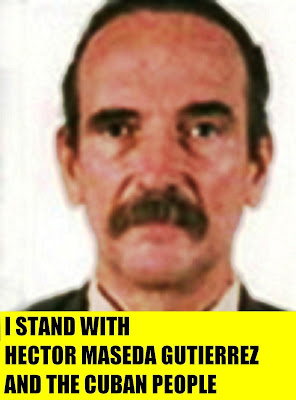 The death of a prisoner of conscience combined with the brutal assault of mothers, sisters and daughters of prisoners of conscience attacked for simply attending Mass at Santa Rita Catholic Church and silently marching along a main avenue in an effort to obtain their husbands, fathers and sons freedom generated a huge amount of international outrage and press attention.

In May, a Cuban Consul in Norway assaulted a young Norwegian woman of Cuban descent hurling insults, threats and attempting to seize her camera bit the young lady's hand. This generated a lot of bad press coverage in Europe and again placed the focus on how Cuban officials shabbily treat every day people even in a democracy.

In June, the Special Rapporteur on Torture, Manfred Nowak, held a press conference where in diplomatic speak he took the Cuban regime to task: “I regret that in spite of its clear invitation, the Government of Cuba has not allowed me to objectively assess the situation of torture and ill-treatment in the country by collecting first-hand evidence from all available sources.” 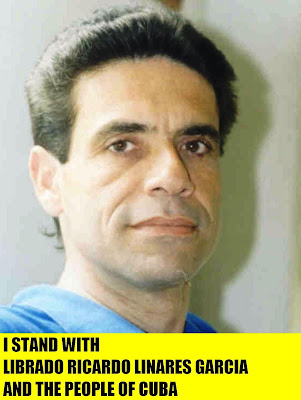 In an effort to improve its international image and its relationship with the European Union to obtain much needed loans and credits to sustain its regime the dictatorship agreed to sit down with representatives of the Cuban Catholic Church and along with the socialist Spanish government hammer out an agreement in which all of the prisoners of conscience unjustly imprisoned would be released within 3-4 months of the July 7, 2010 agreement. Over time it became increasingly clear that to leave imprisonment one had to go straight into exile. 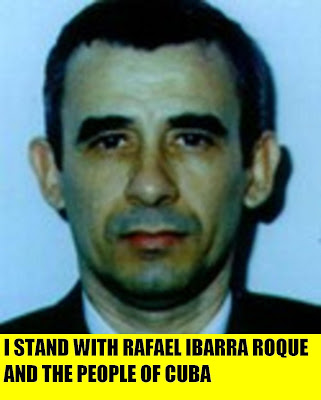 Despite efforts to mend their image on the international front the Cuban regime continued to brutalize activists in the island while attempting to minimize press reporting. One example involved the pregnant wife of an opposition leader who was roughed up, strip searched and vaginally probed with a speculum by Cuban officials threatening her pregnancy. 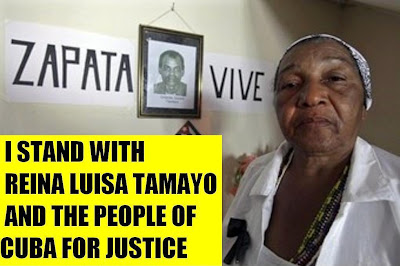 In October, Sonia Garro and Mercedes Fresneda carried out a march at 23rd Avenue in Havana with a sheet with the inscription that read: "Down With Racism & Long Live Human Rights" and the two women were detained by police. According to both Garro and Fresneda they were detained at the police station for seven hours where they were beaten. Sonia Garro suffered a fracture of the nasal septum and Mercedes Fresneda a broken left wrist among other injuries reported the EFE newswire. 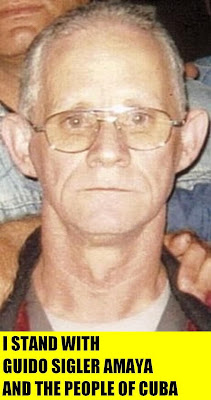 Today as the world observes International Human Rights Day which marks the 62nd Anniversary of the signing of the Universal Declaration of Human Rights on December 10, 1948, where Cuban diplomats representing a democratic Cuba wrote one of the early drafts of this human rights charter, Cubans continue to be imprisoned for their ideas.

Today, December 10, 2010 is the one month deadline for the release of the 11 prisoners of conscience that a representative of the dictatorship pledged to Diosdado González Marrero on November 10. There are clear examples of international solidarity for the victims of human rights abuses and those who seek to defend them, but there needs to be more. There is a campaign under way by the daughter of prisoner of conscience Oscar Elias Biscet Gonzalez, Winnie Biscet, she is asking for the solidarity of people of good will with a signature for a petition for her father's freedom. As of this morning 893 souls have signed the petition. There is also a petition circulating for Chinese dissident Liu Xiaobo. 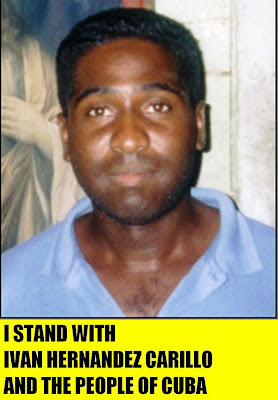 There is also cause to hope. In 2010, the good did associate to combat the bad. In January over 25 members of the Norwegian parliament spanning the five major political parties organized a committee to support Cuban prisoner of conscience Normando Hernandez Gonzalez and to address the troubling situation of political prisoners in Cuba. Normando was reunited with his family in exile in Spain on July 14. Courageous Norwegians despite dire warnings and threats by Communist China awarded the Nobel Peace Prize to human rights defender Liu Xiaobo. The Nobel Committee in its announcement explained why: The Nobel Peace Prize 2010 was awarded to Liu Xiaobo "for his long and non-violent struggle for fundamental human rights in China". Other countries such as Cuba have bad people in power combining with other bad actors in China in an effort to attack the Nobel Peace Prize laureate while other countries shamefully succumb to economic blackmail from the Chinese regime.

When the good associate even in small numbers they can with small acts of resistance or solidarity bring great change. What are you willing to do? Click on one of the images above and use it as your profile on Human Rights Day?

Now is the time for quick and concrete action that requires a minimum of effort but will make an impact. Here are three suggestions:

The human rights defenders imprisoned since 2003 were imprisoned for seeking, receiving and imparting information and ideas to other Cubans and the international community. Name each one of the 11 imprisoned activists. All have been recognized by Amnesty International as prisoners of conscience. They can be listed together or separately. Post their names on face book, twitter, in blogs and any other social media that is appropriate.

3) Write a letter requesting the release of a political prisoner. Record and post video messages of solidarity on youtube directed at these prisoners of conscience and their families by name demanding their freedom along with what human rights mean to you. Make a poster with a photo of one of the images on this page. Take your picture holding up the poster or a message of solidarity and e-mail it to us at freecubanow@hotmail.com

Remember small principled acts of nonviolent resistance or solidarity can bring about great positive change. It's been tried in other places where prisoners of conscience have been imprisoned and has worked. Check out the video below.