Crackdown in Belarus and the Solidarity of the Shaken 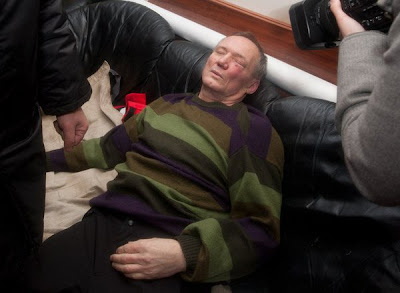 Opposition candidate Uladzimir Niakliaeu (pictured above) on his way with supporters to take part in the demonstration didn't make it. He appeared to have been assaulted by regime forces before arriving in the square and left unconscious.

The video is compelling, and although in Belarusian, one can still make out that a peaceful demonstration was put down by regime officials. The video caption reads:

Uladzimir Nyaklyayew was beaten unconscious by unknown men while he was about to lead a group of his supporters to a rally in Kastrychnitskaya Square to protest what the opposition claims was large-scale vote-rigging in Sunday`s presidential election. At about 7:20 p.m., the opposition presidential candidate and about 100 his supporters were attacked by about 50 men in black clothes while standing near the office of the "Tell the Truth!" campaign led by Mr. Nyaklyayew. Several other people were also severely beaten, including Mr. Nyaklyayew's campaign chief, Andrey Dzmitryyew. Mr. Nyaklyayew was carried into the office. An ambulance was called for him.

Needless to say the sounds of gun shots and screams of the peaceful demonstrators terrified for their lives is disturbing.

Received the following message from a Belorussian friend early this morning about events in Belarus:

It looks like nightmare. Like civic war. A lot of people just disappeared. I hope I won't hear about deaths today... Around 2000 people are arrested and disappeared. International friends, please, SOS, spread the word, it is really scary and your solidarity will help us so much!

In Belarus another undemocratic "election" has taken place and the dictator brutalizing the opposition and all who dare dissent has blocked the internet and begun mass round ups of the political opposition. Now is the time to speak out on behalf of the democratic opposition in Belarus and denounce the brutality inflicted on them. Alexander Lukashenko has been ruling the country since 1994 and shows no sign of giving up power. This is not the first vote he has rigged.

The President of the European People's Party (EPP), the largest European level political party, Wilfried Martens, made the following statement:

"The violent crackdown by the Belarusian authorities on opposition candidates and peaceful protesters in Minsk last night is truly deplorable. These acts are totally unacceptable and are an offense to the European Union and the democratic world. On behalf of the EPP, I offer my full solidarity to the democratic opposition in Belarus," the EPP President declared.

International observers have declared the presidential election "seriously flawed and violent." According to the Associated Press: "The Organization for Security and Coooperation in Europe said the count in Sunday's vote was 'bad or very bad' in half the country's precincts." 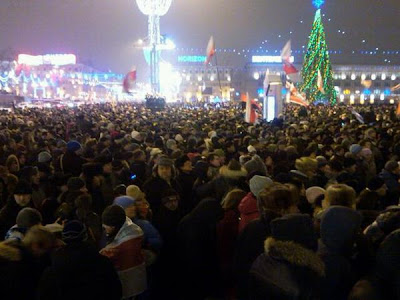 Thousands of opposition demonstrators in main square of Minsk protesting irregularities in the "election." 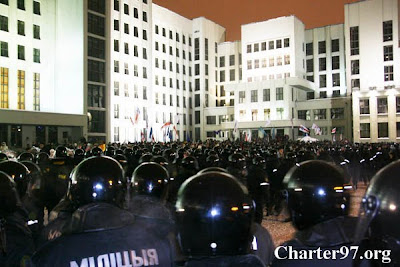 On Sunday, December 19, 2010 riot police attacked opposition with stun grenades and truncheons scores hurt and detained. On Monday, December 20, 2010 security services rounded up scores of opposition leaders and their supporters.

Reproducing the latest reporting from the European Radio for Belarus below:

At least 230 people and seven candidates detained in Minsk (UPDATED) Trials will take place on Monday. PHOTO AND VIDEO OF ACTION DISPERSAL + A LIST OF THE DETAINED and phone numbers to find out what has happened to your relatives and friends.

A mop-up operation occurred at the Independence Square. People are transported in the police vans. One of the detained, Tatstsyana, informed live on air that 35 people had been detained and were transported to the direction of the Minsk belt road.

23.20. A mop-up operation is happening at the Independence Square. The crowd is broken into parts, riot policemen beat and detain people. A number of police vans stand near the House of Government, some of them have left, full with people. Military men of the internal troops joined the riot policemen.

22.58. Riot police break into the column of people and is running to the Lenin’s monument, beating people. Someone in the crowd says they have beaten Vital Rymasheuski and dragged him to the police department. Rymasheuski is not seen anywhere. The leaders of the action call on people not to leave and demand the police should stop beating people.

22.50. It is unknown why the special forces relocate. A presidential candidate Vital Rymasheuski’s head has been severely injured.

22.40. Controversial information with regard to negotiations between the leaders of the action and the special forces. According to some information, the presidential candidates did not enter the House of government.

22.30. The demonstrants started breaking the doors. Riot police with shields appeared and forced the people back from the building.

22.25. No information from the opposition leaders who went to negotiate. The demonstrants start breaking the doors.

22.10. The leaders of the action have approached the House of Government to negotiate with the special forces representatives. They demand new election without Lukashenka.

21.49. The information that people are breaking glass in the House of Government appeared. However, the leaders of the action stated it was a provocation and led the people back from the building.

21.45. Information about storming the “Tell the Truth!” campaign office has not confirmed.

21.40.Euroradio’s correspondent Zmitser Lukashuk, the audio apparatus has been installed near the Red Catholic Cathedral. Andrei Sannikau made a speech. It became known that “Tell the Truth” office was occupied by riot police.

21.30. There is no free space near the Pedagogical University at the Independence Square. Our correspondent Artsyom Martynovich informed that the riot policemen had said they would use special technical means against the demonstrants.

21.20. Many people go along the avenue. There is an information that there are 20 thousand people there. People chant “Leave” and “Freedom!” Someone lit red fireworks, the traffic police do not interfere. They approach hotel “Minsk”. Andrej Sannikau and Vital Rymasheuski are there. [21:59:24]

http://euroradio.fm/en/1434/
The World Movement for Democracy has issued a Democracy Alert outlining rights violated in the run up to the crackdown in Belarus and have also provided more information resources on violations that occurred during and after the presidential election in Belarus:

For more information on the Parallel OSCE Civil Society Conference and Outcome Document (in English), go to: http://www.wmd.org/networking/central-and-eastern-europe-eurasia/spotlight/central-asia#kazconf

For more information on the Defending Civil Society project, go to: http://www.wmd.org/projects/defending-civil-society

Now is the time for all people of good will to demonstrate their solidarity with the democratic opposition in Belarus and to demand that fundamental human rights be respected and that the time has arrived for the dictator Alexander Lukashenko to step down. Every little bit helps. Take a stand. Sign a petition. If there is an embassy or consulate nearby representing Belarus hold a candlelight vigil or a picket demanding an end to the violence and freedom for all those unjustly detained. Amnesty International has weighed in demanding an end to the clampdown on the opposition.

In the video below several riot police knock down a non-violent protester and kick him repeatedly:

"Those who profess to favor freedom and yet depreciate agitation, are people who want crops without ploughing the ground; they want rain without thunder and lightning; they want the ocean without the roar of its many waters. The struggle may be a moral one, or it may be a physical one, or it may be both. But it must be a struggle. Power concedes nothing without a demand; it never has and it never will." - Frederick Douglass

Take action now. Sign this petition and make a demand for an end to this injustice and ask your friends to sign as well.

Update from Christina Chris Karchevskaya on the situation in Belarus:

Proof of peaceful demonstration: two opposition candidates are asking people in black to stop breaking windows and doors in Parliament:
http://zmagarka.livejournal.com/1093387.html
http://nn.by/?c=ar&i=47815 - provocations from police and KGB (IT IsVERY IMPORTANT, we have already operative sound records that breaking in Parliament was PROVOCATIONS, our demonstration was PEACEFUL, PAY ATTENTION ON THAT, governmental mass media says that it was initiative of opposition, but it is not truth!)
http://twitpic.com/3ieox5 - policeman beats girl from the crowd
http://upl2010.narod.ru/facts/evseev - one of policemans beats peasful people
http://www.youtube.com/watch?v=GrM8pdXeO68&feature=autofb - police beats peasful demonstrants


Update for December 24, 2010 sent by Denis Baranov of Free Belarus

Some updates:
- still no lawyer meeting with Vladimir Niekliayev;
- 5 people were detained today during the solidarity candle picket at Akrestsina jail;
- 13 women being held in a 8-person cell went on a hunger strike;
- state tried to take custody of Andrei Sannikov & Irina Khalip's 3-year-old son; Irina Khalip's parents filed for guardianship;
- it seems that the rumors of people being transferred to Hrodna & Homiel are just rumors but it may end up that only a few prisoners were taken there.

Thank you for the feedback you are sending and for the support you are providing!
To those who celebrate it, Merry Christmas!

Update for December 26, 2010 sent by Denis Baranov of Free Belarus

Of the good news, Andrei Dmitriyev's lawyer was allowed to meet with him on Saturday, which is a bit strange because it wasn't a visitation day at the KGB detention center. He seems to be in a good condition.

Update for December 29, 2010 sent by Denis Baranov of Free Belarus

- Everyone who was sentenced to 10-day arrest was released today. The government drove people in buses around Minsk and let them at random locations so that the prisoners could not be greeted with a large crowd. Several people of the released had untreated fractures.
- All citizens of Russia and the young man who was snatched out of his mother's car were released early.
- Six of nine candidates were indicted with promoting events that led to riots. Arrests for everyone indicted were ordered for 2 months.
- Alies Mikhalievich is the only one who has not been charged. His 10-day detention expires on December 30.
- Vladimir Niekliayev suffered a hypertension emergency. His lawyer says he is on stroke watch and not hospitalized.
- A lawyer for Natalya Radina (editor-in-chief of Charter'97 website) says she still is not healed after the beating at the time of detention and bleeds from her ears.
- Poland announced that starting January 1 all Belarusian citizens could receive extended national visa for free. They also started a blacklist for people involved in rigging elections & repressions of protesters (police officers, judges, business managers, etc). The blacklist will apply to the entire European Union because of the common border policy.

Update for January 5, 2011 sent by Denis Baranov of Free Belarus

The human rights watchdog NGO Spring '96 published the most complete list of persons charged with inciting & participating in riots on December 19 as well as the current suspects in the case.

In addition Zmitsier Dashkievich (Young Front's chairman) and Eduard Lobau (Young Front activist) are charged with hooliganism for an alleged assault of some person and have been under arrest since December 18, 2010.

German human rights NGO Libereco started a campaign of appeals to release the political prisoners and prevent students from being expelled from universities. The letters & addresses can be found here: http://www.lphr.org/en/news/news-details/article/jetzt-versenden-dringende-appelle//3/

Belarus Free Theater is participating in the Under The Radar festival in New York City. They are performing Being Harold Pinter almost every day until January 16. Some shows are already sold out. The tickets can be purchased here: https://www.ovationtix.com/trs/pr/793965

Natalya Koliada will be in Washington, DC, for some meetings in US government on January 6-7. We are trying to find out whether she will have time for a meeting with the diaspora & others here.
Posted by John Suarez at 6:31 AM