Eliseo Alberto: An honest man who spoke out

''It was like opening a valve... more than an exorcism... The book was already written. It was very painful, but very easy.'' - Eliseo Alberto 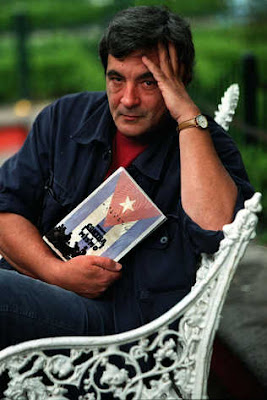 The writer who opened the door to life in Cuba during the Castro regime to me has passed away. Never had the opportunity to actually meet him but he left a great impact on me. His name was Eliseo Alberto. He died in Mexico days after having undergone a kidney transplant.

The book that in first person honestly described how people loyal to the regime lived in it during the 1970s and 1980s was a revelation. His father, Eliseo Diego, is considered one of Cuba's greatest writers and poets of the 20th Century. Following his father's death in 1994 Eliseo Alberto began to write this important book. Although Peter Katel in September 1, 1997 reviewed Eliseo Alberto's most important book Report Against Myself (Informe Contra Mi Mismo) with the headline: "A Coward Speaks Out" and began the review stating:

Talk about an antihero. Cuba's latest literary sensation is a writer whose memoir recounts how he was offended by government orders to spy on his own family-but was too scared to say no. He waxes nostalgic over the Cuba of the '60s and '70s, yet acknowledges that he and his friends stood by while the state persecuted homosexuals and longhairs. He describes his eagerness to move abroad while keeping his ties to the island as long as he kept his mouth shut (which he did for several years). The harshest self-criticism in the book was to include this observation from a friend still in Cuba: "I can't help but notice that in your previous books you never touched on the political problem. You had a healthy reputation for cowardice."

However, Katel got it wrong. Speaking or writing the truth including ones own shortcomings is not cowardice but in fact its opposite: courage. 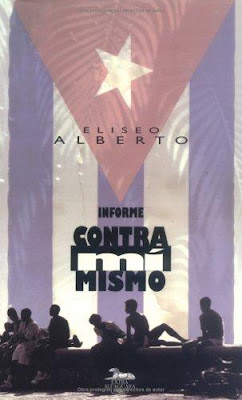 A book that begins with a profound and personal description of Castro's tropical Stalinism in the first person with author describing how he spied on his own family.In a November 20, 1997 interview in the now defunct magazine Exito Santiago Aroca wrote

''They first asked me to inform on my family in 1978,'' is the first line of the book. According to Alberto, Cuban State Security police directed him to spy on his father, the poet Eliseo Diego, considered by some among the foremost Cuban intellectuals of the 20th. Century. ''I would ask my father what I should write in my report and he would even correct my spelling,'' said Alberto. ''My father said he wasn't concerned about me accusing him of crimes against the Revolution... but he thought it would be unforgivable for the report to contain grammatical errors.''

In the end writing the book Report Against Myself (Informe Contra Mi Mismo) his status as one of the privileged nomenklatura came to an end. In the same Exito interview Eliseo Diego described how it went: ''After the book was published, they took my passport away and they gave me another one that looks horrible, with rusted staples, very thin. It makes the holder seem like a suspicious character,'' said Alberto. ''Now, with an American stamp that says ''rejected,'' it looks so disreputable that when I went to the Cuban consulate to ask for a visa to go to my own country as a tourist, the official looked at it suspiciously and said it wasn't prudent at this time for me to return to the place I was born.'' His father Eliseo Diego had offered Alberto words of hope while still in Cuba: "The old man used to say that in this world of crooks, to see an honest man was really something. Of course, there are honest men in Cuba and they are heroes, even though they may spend more time in jail than on the street." 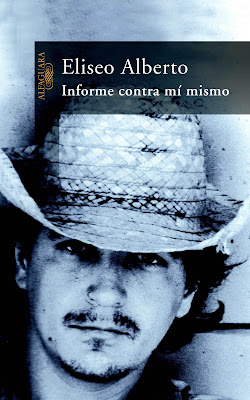 Writing honestly has a cost in a totalitarian regime and in Eliseo Alberto's case it was to die exiled from his homeland in Mexico. Requiescat in pace.
Posted by John Suarez at 8:14 PM