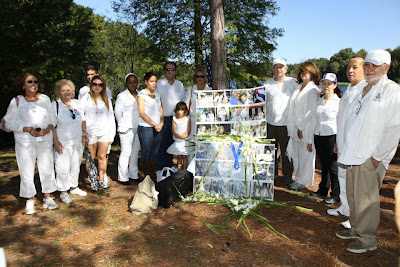 Today as 50 Ladies in White marched through the streets of Havana, Cuba and only three Ladies marched through Santiago de Cuba (several other women were detained to prevent them from attending a Mass for Laura Pollán in the Cuban province) in Tampa, Florida first at 10 am at Al Lopez park and later at Casa Cuba, people of good will gathered to pay homage to Laura Pollán.

Marc Masferrer of Uncommon Sense, pictured above at the Silent Walk in Honor of Laura Pollán provides additional photos, commentary and context on the activity held at 10:00am. 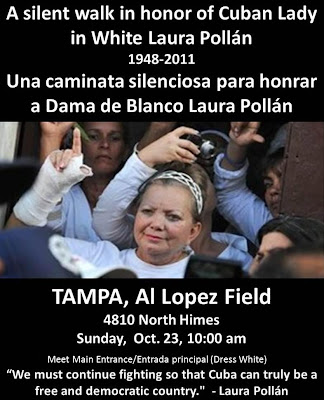 Meanwhile across town at Casa Cuba at 1:30pm Cuban exiles gathered for a day of music and food but first held a moment of silence for the recently deceased leader of the Ladies in White.

Since her death on October 14, 2011 there have been a number of activities both inside and outside of Cuba and numerous essays honoring the life of Laura Pollán and her achievements as a human rights defender. At the same time a number of articles have been written questioning the circumstances surrounding her death. Today the Wall Street Journal's Mary O'Grady has cataloged and provided context to these questions in her essay A Dissident's Mysterious Death in Havana:

Over the life of the Cuban dictatorship, suspicious deaths (most commonly heart attacks) of otherwise healthy individuals who were considered disloyal to the Castros are not unheard of. The most famous was José Abrantes, a former interior minister and confidant of Fidel, who had a falling out with his boss, was imprisoned, and though known for being fit died of a heart attack in his cell in 1991. More than one defector from inside the regime has claimed that Abrantes was murdered.

Pollán took up her cause when her husband, Hector Maseda, was arrested, along with 74 others, in an island-wide crackdown on dissent in March 2003. Seeking a way to resist the injustice, she joined other women whose loved ones were handed down long sentences in Cuba's Black Spring. Together they organized a simple, peaceful act of disobedience: After attending Mass at St. Rita's church in Havana, they marched in the street, dressed in white and carrying gladiolas. The group was peaceful and nonpolitical. But to the regime it was dangerous. Mobs were unleashed against it.

The movement took on enormous visual power, and when images of the ladies being attacked in the streets went viral, the dictatorship was humiliated. The Castros were forced to offer the Black Spring prisoners "liberation" through exile with their spouses.

Pollán and her husband refused. Instead she expanded the movement across the country and promised to convert it to a human rights organization open to all women. Speaking from the Guanajay prison as her condition was deteriorating, jailed former Cuban counterintelligence officer Ernesto Borges Pérez told the Hablemos Press that making public those objectives likely sealed her fate.

On Sept. 24, Pollán was attacked by a mob as she tried to leave her house to attend Mass. Her right arm was reportedly twisted, scratched and bitten. This is notable because for more than a year, the Ladies had alleged that when Castro's enforcement squads came after them, the regime's goons pricked their skin with needles. Those same women claimed that they subsequently felt dizzy, nauseous and feverish. Independent journalist Carlos Ríos Otero reported this for Hablemos Press before Pollán was hospitalized.

According to interviews with Pollán's daughter and husband and with Ms. Soler, conducted by the Miami-based nongovernmental organization Directorio, eight days after the Sept. 24 assault Pollán came down with chills and began vomiting. Wracked with pain in her joints the next day, she was taken to the Calixto García hospital. After a battery of tests she was told everything was normal and released. On Oct. 4, she had a fever and shortness of breath. A prescribed antibiotic did not help. On Oct. 7 she was admitted to the hospital, later transferred to intensive care and the next day put on a respirator.

Her family was denied visitation rights until Oct. 10, when only her daughter was allowed to see her. State security agents surrounded her bed and monitored the doctors. On Oct. 12 doctors reported that she had a syncytial respiratory virus, which is otherwise known as a cold. She was obviously much sicker.