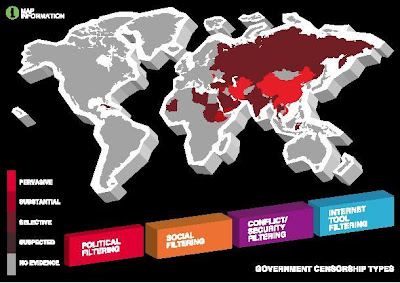 2011 will hopefully be looked back as the year when both the right to internet access and the threat to internet freedom were both recognized and tech companies collaborating with human rights organizations set out standards to address the problem and uphold a fundamental right. Only time will tell if human rights defenders working with tech companies can ensure that the internet be a space where freedom of expression exists along with a right to privacy. Today, both are under serious assault.

On May 16, 2011 Frank LaRue, the United Nations Special Rapporteur on the Promotion and Protection of the Right to Freedom of Opinion and Expression, presented a report that recognizes:

While blocking and filtering measures deny users access to specific content on the Internet, states have also taken measures to cut off access to the Internet entirely. The Special Rapporteur considers cutting off users from internet access, regardless of the justification provided, including on the grounds of violating intellectual property rights law, to be disproportionate and thus a violation of article 19, paragraph 3, of the International Covenant on Civil and Political Rights.

In the map above from AccessNow there is one country in the Western Hemisphere that selectively filters political content that has been identified and that is Cuba. In addition the regime has done everything possible to limit access to the populace.

The first lesson is that technology today is neutral. The same face book page that assists activists in organizing can also assist repressive regimes in both identifying them and where they can put their hands on them. Until now, for the most part, the technologies that human rights defenders have used on the internet were not specifically designed with human rights in the minds of the developers.

Hopefully, that will change. Today there are companies that have and are collaborating both with human rights activists and human rights violators. There are companies that develop software to spy on citizens and censor internet content. Human rights defenders have been identified by some of these companies for repressive regimes leading to their detention, imprisonment, torture and death. Other companies have completely cut off service and sent out threatening messages for the regime in power at a moment of crisis.

For example, in Egypt Vodafone complied with Egyptian government demands to cut off internet access and sent out pro-regime text messages during the uprising there. Anti-virus and filtering software company McAfee (now owned by Intel) worked hand-in-hand with the ben Ali regime in Tunisia to help it block unwanted websites. In China, Yahoo offered information on Chinese dissidents that led to their imprisonment. Cisco provides some of the critical technology behind the Great Firewall of China, the filters that blocks citizens from reaching the uncensored Internet and is in talks to provide the networking equipment that will enable an extensive surveillance system in China that will employ hundreds of thousands of cameras.

Video streaming by Ustream
Panel on Visual media technologies, content and human rights at Silicon Valley Human Rights Conference
Over two days on October 25th-26th, 2011 at the Mission Bay Conference Center, San Francisco the Silicon Valley Human Rights Conference was held with both the sponsorship and participation of Google, Facebook, Yahoo!, Mozilla, Skype and other technology companies. Summaries and some of the videos of the various workshops are available online and are required viewing both for techies and human rights defenders.

Brett Solomon, executive director of Access Now, the New York nonprofit that organized the Conference was cited in the San Francisco Chronicle laying out whats at stake:

"One of the key things we're trying to do is to put a name on this issue, to recognize that companies' technologies and platforms have human rights implications. ... They have to fully recognize in advance that they can't make decisions without considering how these technologies are going to play out in people's real lives. ...Sometimes it can be a question of life or death."

Over the course of the two days there were a lot of panels that focused on defense: protecting privacy, ethical business practices, informing users of the dangers of having their identities and locations exposed to human rights violators and technologies used to spy on and censor them. However, one panel that caught my attention because it went on the offensive was the one on Visual media technologies, content and human rights. Panelists included: Sam Gregory : Program Director, Witness.org,Thor Halvorssen : Founder, Oslo Freedom Forum, Hans Eriksson : Founder/ Executive Chairman, Bambuser, Sameer Padania : CEO, Macroscope (moderator) and Steve Grove : Head of News and Politics, YouTube.

An excerpt of the conversation transcribed by Katherine Maher is reproduced below:

Sam Gregory: A lot of video shot on mobile leaks a lot of information about where people are. And there were Egyptian activists who chose to show their locations–Wael Abbas (@waelabbas) wanted people to see his location, so he could demonstrate where there were roadblocks. There is a flip side. You know, if you’re in Syria, you don’t want to be geolocated, you might not want to be visible in the frame, and you might not want to have the background imagery in the frame. We know there are 5 people who want to be seen but a ton of people who do not want to be seen on youtube. And with certain things, like anonymizing your IP address, is easy, but anonymizing video is a big challenge. You have to go into your FinalCut Pro and try to obscure the identities. This is a major challenge. As Alaa (@alaa) highlighted in opening speech, the activist from Egypt said, activists are only 1% of the users, but these issues should be relevant for the other 99%. For those not in Syria, those who might not be out, those who are subject to domestic violence, for example and don't want to have their images shared all over the net.
[...]

Hans Eriksson: We don’t force people to give away information whatsoever when registering and broadcasting. But the challenge is, how do you educate the user? For example, Egypt again - Ramy Raoof (@ramyraoof) did tremendous work creating manuals in Arabic about how to be safe using Bambuser, and distributing this in all possible ways. We want you to be safe using Bambuser. I don’t know if it is relevant to users in North Africa or the Middle East, but we’re a Swedish company, and we have fair legislation, we’re a democracy, and our servers are protected under Swedish law. Its a difficult question you want to get it out and be anonymous at the same time. One request we’ve had from quite a few is that, they have poor connections, or no connections, but we want to use Bambuser. We do live broadcasting, but now, starting next week, we’ve created an offline opportunity for recording and uploading. And really, this is 99% percent in response to our users in North Africa and the Middle East. We are a private company want people to see Bambuser as a full video service, whether you have a data connection or not.

Thor Halvorssen: One of the main problems is a resource problem. Witness puts cameras everywhere, but of course, there are a number of places they cannot put cameras, they can’t fund being everywhere. There are 6 or 7 countries that have no internet whatsoever. A great example of places to have cameras would be Cuba, another great example is North Korea. Sometimes video takes months to travel out, and it become difficult to know who actually took the video, and what you’re really looking at specifically other than a human rights violation. What do we do with this? So one suggestion for what companies can continue to do might be to start assigning by topic–for instance if a general election is going to take place next year in 3 different countries in Africa and 2 countries in Latin America this is something that from a human rights perspective is absolutely essential. To be able to have citizen journalists rather than electoral observers. If it can be put together, rather than curating a whole bunch of news, the elections in such and such a place, just have a place for raw footage from a certain location, like elections. So rather than look at things like armed conflict, which is difficult to look at, video, and Transparency brought by this is far beyond what international observers can do in regards to instantaneous attention. A 5 minute clip from one country, can end up opening a Pandora’s Box questioning about what really happened that puts aside political considerations of international observers. If we declare this election fraudulent we are going to have fighting in the streets. What are we going to do? This were the crowd is much wiser than some appointed political actors.

Thor Halvorssen: People who go on the streets, and are willing to die, often say, by all means, go put my image out there, I’m willing to to this. And if the Bahraini government goes ahead and persecutes them, it gives us yet another opportunity to highlight that hypocrisy and violence. I’m a believer of the more, the better–when you start using the argument of privacy, that’s the same opportunity that governments user to censor. more information may be messy, but censorship is invariably messier.

Hans Eriksson: Of all the hundreds of thousands of videos from the Arab Spring on Bambuser, we yet to have one take down request. It’s possible many people don’t know they’re on video. But this is where the importance of education comes in. The cameras are all around, they’re closer than you think.
Sam Gregory: People choose to take risks, but at the moment, they don’t really have options about how to take them. It’s important to remember that the Arab Spring is really just the tip of the iceberg on human rights. Sex workers fighting police violence in Macedonia, elderly who face physical abuse, sexual violence in South Africa–these are the other stories. I think people need additional controls of how these images are used. I do agree, in the broader sense, that more cameras are good. And that informed consent and privacy are inversely proportional to power.

This is just one small excerpt there was much more that is worth reviewing and reflecting on over the two days of the conference.

The consequences of recognizing the right to internet access as a fundamental human right and the decision of some members of Silicon Valley to commit to taking human rights into account while developing products can have a huge impact. It wouldn't be the first time. The personal computer pioneered by the likes of Steve Jobs and Steve Wozniak, the founders of Apple Computer, in the mid 1970s took computing power that had been for decades controlled by government and large corporations and turned it over to individuals in their homes. Witness was founded in 1992 by Peter Gabriel with the aim of turning the cameras around on Big Brother and monitoring those in power and the abuses they commit against the individual by empowering individuals with cameras. Both decisions to take action on behalf of the individual by a small group of individuals changed the world for the better. Let us hope that it is now repeated in 2011.

The stakes are high. Although the international community recognizes the right to internet access. It is endangered around the world with governments using the internet to spy on citizens, setting up firewalls to censor what users have access to and using kill switches to turn off internet access in the midst of a political crisis. Will tech companies assist in defending the right to uncensored/unmonitored internet access or continue in business with those who seek to undermine what is now recognized as a human right? The Silicon Valley Human Rights Conference offers hope that a number of technology companies are willing to take human rights into consideration.
Posted by John Suarez at 9:04 PM