In Havana, Cuba on Sunday over 100 activists marched through the streets and chanted Laura Pollán lives! 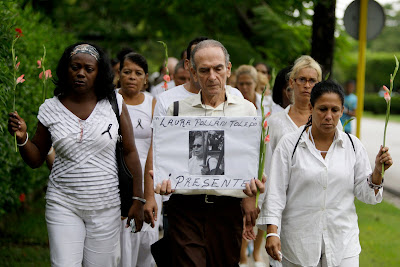 On the same weekend that the United States dedicated a national monument to the nonviolent resistance activist Reverend Martin Luther King Jr., Cubans held a wake for Laura Pollán. King was a Baptist Minister and Laura a school teacher but they both shared the same methodology of struggle, nonviolent civic resistance. Martin Luther King Jr. was assassinated on April 4, 1968 by an assassin's bullet at the young age of 39. Laura Pollán died on October 14, 2011 of an illness that some believe may have been administered by the state security apparatus. She was 63 years old. Both foresaw the possibility that they could be killed and both said they were not afraid. The night before Martin Luther King Jr. was assassinated by a gunmen he gave his "I've been to the mountaintop speech" and told the audience "Like anybody, I would like to live a long life. Longevity has its place. But I'm not concerned about that now. I just want to do God's will." Less than a month before she died Laura Pollán in a September 24, 2011 interview said “If what God wants is that we must give our own lives in pursuit of the freedom of our Cuba then so be it.”

In both cases they left behind a movement that would continue after them. In the case of Laura Pollán it was the Ladies in White. The likely new leader of the movement is Bertha Soler. Despite a nationwide operation to round up activists and Ladies in White that wanted to travel to Havana to say farewell to Laura Pollán (denounced by the Irish human rights organization Frontline Defenders), over 100 activists managed to circumvent the crackdown and attend Mass at Santa Rita Church then march through the streets of Cuba. 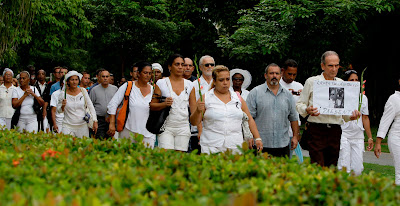 The news of her passing and the impact she had in Cuba and around the world demonstrates the power and moral legitimacy that her nonviolent struggle generated. She touched so many who are now mourning her passing. A young woman in Argentina who treasures the gladiola that Laura gave her. President Obama paid tribute to Laura Pollán upon her passing as did Mitt Romney, one of the Republican candidates running against him. In Miami a prayer service was held on the same night she passed away and a Mass for the eternal repose of her soul the following night attended by former prisoners of conscience now free thanks to Laura and their wives who had been part of the Ladies in White.

What did Laura Pollán accomplish? She changed Cuba. Despite all the efforts of the totalitarian communist dictatorship that has a monopoly over force and the mass media in Cuba, Laura was able with a small group of courageous women to take to the streets and demonstrate. Not once or twice but on a weekly basis since her husband was unjustly imprisoned in March of 2003. The dictatorship did everything they could to stop them, including brute violence. Bruises and broken bones did not deter these ladies and they continued marching with casts and slings. Over a 100,000 people dressed in white took to the streets in Miami in the spring of 2010 to protest the violence against these women led by Gloria Estefan, who had organized the demonstration. In the summer of 2010 the dictatorship finally began the process of releasing the bulk of the remaining prisoners of conscience from the group of the 75 and the last of them were released in the spring of 2011. Unfortunately, there were new prisoners of conscience whose release the Ladies in White would continue to demand. Laura recognized that "[a]s long as this government is around there will be prisoners because while they've let some go, they've put others in jail. It is a never-ending story." Five days before she became deathly ill, as the violence and threats escalated, she let the dictatorship know that: "We are not going to stop. If they have imprisoned our sisters thinking that we would give up, they are mistaken. We are very united (...) all the women's movements are very close."

As in the case of Martin Luther King Jr., Laura Pollán's spirit lives on and is present in the hearts of all who love freedom and detest injustice. Despite their physical absence tyrants and despots fear the example set by these nonviolent activists in successfully confronting injustice and the absence of freedom.
Posted by John Suarez at 12:04 AM