Laura Pollán and The Ladies in White one week later 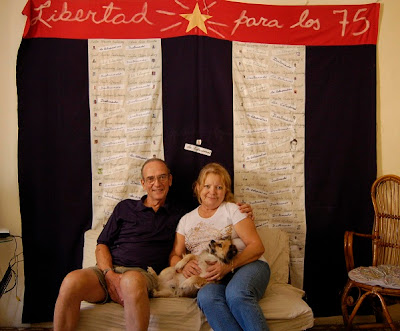 Hector Maseda and Laura Pollán in 2011
Laura Pollán passed away one week ago tonight at 7:50pm in Havana, Cuba after being hospitalized for one week. Her death has impacted the entire world. In the United States and Spain high ranking officials honored her memory and struggle. In Poland, Nobel Prize winner and former President, Lech Walesa sent a letter of condolence to Hector Maseda, Laura's husband and himself a former prisoner of conscience now free thanks in no small part due to his wife's efforts.

I was deeply saddened to receive the information about the passing of your wife, Laura Pollan.

The tragedy, you are experiencing now, is affecting all of us – those to whom close were the values Laura Pollan believed in. She managed to inspire not only her compatriots but also the international society to defend the democratic activists who were unfairly sentenced and imprisoned for their beliefs. The cause of a free and democratic Cuba became our common dream and aim. Ladies in White, the movement founded by Laura Pollan, has been the evidence that peaceful struggle and determination brings always the victory.

Please accept my sincere condolences and assurance of my continual support of the mission initiated by your wife.

While she lived the dictatorship treated her shamefully wrote journalist and writer Achy Obejas describing how on:

One Sunday, Pollan withstood hours of screaming in her face without saying a word, stuck in a park and unable to get home. Less than a month ago, state security blocked Pollan’s street, filled it with government supporters and blocked her door, making it impossible for the Ladies to attend a mass for the patron saint of prisoners.

Given the seriousness of her condition, government officials asked her family if the patient could be transferred to a luxury clinic designed for the military. But Pollan herself said, before losing consciousness in an induced coma, "I want to stay in the hospital of the people." And there she died Oct. 14, after a five-day delay in diagnosing dengue fever, in a country that has been experiencing an intense outbreak of the disease for months now.

Though newspapers around the world reported on the death of Laura Pollan, Granma, the official paper of the Communist Party, and all the papers of Cuba's provinces remained silent. This reaction is a given, considering the pettiness of a government that cannot feel sympathy at the death of an opponent. The Castro regime has never been able to pause in its belligerence, never been able to offer condolences.

But this silence also stems from its fear of this little teacher of Spanish, the fear that sticks, even now, in officials' throats. The leader of the Ladies in White is dead, and no one in Cuba will ever carry a gladiolus in his or her hands without thinking of Laura Pollan.

Following her death the reaction of the dictatorship, to use the death of Laura Pollán to crush the Ladies in White, has also been in evidence along with the courage and ingenuity of the women to circumvent the crackdown. First the Ladies in White marched on the Sunday following her passing despite a nationwide crackdown. On Tuesday, state security agents detained 20 women going to attend the Ladies in White customary literary tea. “The state security agents told them, ‘There’s no Tea. That’s over,’” said Lady in White Berta Soler on what detained women where told. In both cases, despite many women being detained, many still managed to carry out both activities and denounce the repression.

Over the past week the world has learned who Laura Pollán was and that the Ladies in White that she founded are still today struggling for the day when there are no more political prisoners in Cuba.

Despite the immediate family of Laura Pollán indicating that she received adequate treatment at the hospital some dissidents have expressed their suspicions surrounding her death. Juan Manuel Cao, a former political prisoner and human rights defender now a journalist in exile, wrote a column explaining the historical context that gives a grounding to their suspicions. He cites the history of the intelligence services that trained the Cubans. Both the East German Stasi and Soviet KGB were known to use poisons and other instruments to induce death and illnesses that led to death. He also wrote about previous Cuban cases and asked:

"Who killed Sebastian Arcos Bergnes? The opposition leader and prisoner of conscience who from his cell complained for at least two years about a pulsating pain that would come down his leg and would not allow him to sleep. The regime ruled that he was faking it; they made a political diagnosis instead of a clinical one."

Sebastian's son, Sebastian Arcos Cazabon, has spoken on the record about what was done to his father.

A half century old dictatorship with a long litany of crimes against the people of Cuba is what is behind the suspicions and distrust raised by elements of the Cuban opposition. Sadly, these suspicions are not unfounded.

However once again tonight in Coral Gables as has been done repeatedly over the past week in Miami, Madrid and Havana there will be an act of remembrance for Laura Pollán and in solidarity with the Ladies in White who continue her struggle in Cuba today.
Posted by John Suarez at 12:56 AM