Praying the Devil Back to Hell in Cuba and Liberia

For Laura Pollan, a founding member and spokeswoman for the Ladies in White, who tonight is battling for her life in the Calixto Garcia Hospital in Cuba. 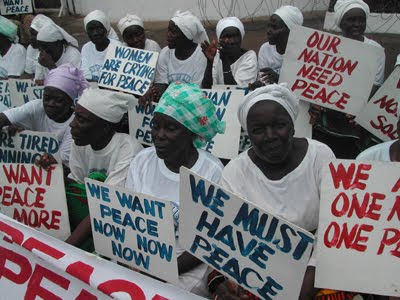 Women dressed in white in Liberia
Women dressed in white ended a bloody civil war in Liberia and drove a tyrant from power using nonviolent means. Could women dressed in white in Cuba resisting a cruel tyrant using nonviolent means achieve the same ends as their counterparts in Liberia? Both groups of women formed more or less at the same time in the Spring of 2003. The women in Liberia were confronting a civil war and a blood thirsty tyrant named Charles Taylor. The women in Cuba were confronting a Stalinist dictatorship led by Fidel Castro that had just imprisoned their husbands, fathers and brothers to decades in prison in show trials because they had organized petition drives, written for independent publications and/or defended human rights. 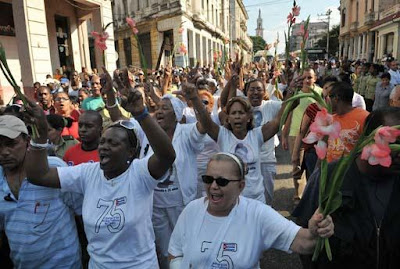 Ladies in White in Cuba. Laura Pollan in front on the right with sling and sunglasses
Living in Miami in the Cuban exile quarter awareness of about the Ladies in White in Cuba has been widespread since March of 2003. Not so the events that led to freedom and the end of bloodshed in Liberia. The first time I heard about the women dressed in white in Liberia was when I purchased and read a small book by Steve Crawshaw and John Jackson with a forward written by Vaclav Havel titled: Small Acts of Resistance: How Courage, Tenacity, and Ingenuity Can Change the World. Listening to the book presentation on September 29, 2010 sold me on making the purchase.

Today, I was reminded about one of the remarkable stories that impacted me at the time because it had reminded me of the Ladies in White in Cuba when one of these Liberian won the Nobel Peace Prize. There story has now been told in a documentary: Pray the Devil Back to Hell.


Trailer for Pray the Devil Back to Hell Documentary

Now thanks to the Nobel Committee the world will have another opportunity to examine this important chapter of history. Crawshaw and Jackson adapted an article based on their book that was published in the April 1, 2011 edition of Yes! Magazine that outlined what happened in Liberia and is reproduced here:

The west African nation of Liberia was founded by freed American slaves. The country’s coat of arms declares, “The love of liberty brought me here.”

In the last years of the 20th century and the early years of this one, however, Liberia was anything but a land of liberty. Drug-fueled militias maimed and killed civilians. Government and rebel forces alike raped with impunity. Hundreds of thousands fled. Others were trapped by the unending violence, unable to flee. As one Liberian woman later remembered, “My children had been hungry and afraid for their entire lives.”

In spring 2003, a group of women decided to try to end the conflict once and for all. Dressed all in white, hundreds of them sat by the roadside, on the route taken daily by President Charles Taylor, rebel leader-turned-president.

The president’s motorcade swept past, slowing down only briefly. But the women returned, day after day. In pouring rain and blazing sunshine alike, they danced and prayed. In the words of Comfort Lamptey, author of a book on the Liberian peace movement of those years, the women were “fighting for the right to be seen, heard, and counted.”

Taylor mocked the women for “embarrassing themselves.” Still, though, the protests gained momentum. Religious leaders—imams and bishops alike—spoke out in support of the women’s demands. Radio stations began reporting sympathetically on the roadside protests. Leymah Gbowee, one of the protest leaders, declared in front of the cameras, “We are tired of our children being raped. We are taking this stand because we believe tomorrow our children will ask us: ‘Mama, what was your role during the crisis?’”

Pressed on all sides, Taylor agreed to talk. He met with the women’s leaders in the presidential palace. Peace talks with the warring factions began in Ghana a few weeks later.

The women decided that enough was enough. Determined to focus on the human cost of the war, they barricaded delegates into the room where the talks were taking place. One of the negotiators, Nigerian General Abdulsalami Abubakar, remembered later: “They said that nobody will come out till that peace agreement was signed.” As described in the 2008 documentary film Pray the Devil Back to Hell, one warlord tried unsuccessfully to kick his way out of the room. Others tried (and failed) to escape through the windows.

Johnson-Sirleaf said: “It was ordinary Liberians who reclaimed the country and demanded peace.”

Two out of the three women who won the Nobel Peace Prize, Ellen Johnson-Sirleaf and Leymah Gbowee are named in the above article. Not only did they end a bloody and brutal civil war but also drove a ruthless and brutal dictator using nonviolent means. As the world witnesses the aftermath of violent resistance in Libya against another ruthless and brutal dictator. This episode offers hope that there is a better way and indeed women have and are leading the way.

Women dressed in white prayed the Devil back to Hell in Liberia while resisting evil without doing evil. The women in Cuba using nonviolent means got their loved ones back from brutal and inhumane prisons which was there immediate demand, but the reason that their husbands had been imprisoned and they beaten for defending them remains: a brutal Stalinist dictatorship led by Fidel and Raul Castro. Hopefully, Cuban women dressed in white will be able to do in Cuba what their counterparts did in Liberia.

Tonight I am praying for the life and health of one of these brave Cuban Ladies in White, Laura Pollan who is battling a dangerous respiratory illness. Praying that she makes a speedy recovery and that one day soon Cubans can look back and honor the Cuban Ladies in White who played an instrumental role in ending a half century of tyranny and division.
Posted by John Suarez at 11:44 PM