'To witness a crime in silence, is to commit it.' - Jose Marti 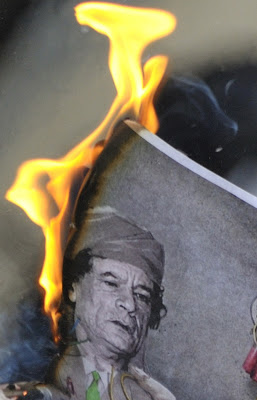 The end of the Qaddafi regime in Libya is a bloody and disastrous affair for the Libyan people and the new regime appears to have embraced some of the sordid practices of the old regime. The decision of the opposition to embrace violence and invite NATO intervention guaranteed that the struggle for a free Libya would become far more difficult and fraught with even more danger to the populace. As of today one could credibly make the argument that it has been a failure.

At the same time deniers of Moammar Qaddafi's bloody reign have emerged claiming that the Libyan tyrant had not been engaged in the systematic gross human rights violations that invited condemnation from the United Nations Human Rights Council and the United Nations Security Council. Furthermore that organizations and individuals that signed an Urgent Appeal to Stop the Atrocities in Libya calling for the condemnation of the dictatorship at the United Nations and its expulsion from the UN Human Rights Council are liars who are responsible for this conflict.

The chief villain according to the defenders of Qaddafi is the Libyan League for Human Rights. They fail to mention that one of the founders of the group, Mansour Kikhia, was abducted in Cairo on December 10, 1993 and taken to Libya where he was executed on Qaddafi's orders. According to The Washington Post: "Kikhia, who defected to the United States in 1980, served as Gadhafi's foreign minister and ambassador to the United Nations before turning into a sharp critic of the regime." Nor do the apologists mention "the Abu Salim Prison killings in June 1996, when the security forces allegedly killed up to 1,200 inmates" reported by Amnesty International in its 2011 annual report (which covers 2010). There are many more atrocities committed by the Qaddafi regime prior to the crisis of 2011 that are well documented prior to the "fog of war" which requires greater discernment.

However, the document makes no mention of the numerous reports by Amnesty International and Human Rights Watch denouncing mass killings and systematic human rights abuses by Qaddafi's regime in Libya. For example on February 18, 2011 Amnesty International reported at least 46 people shot dead by security forces over the previous 72 hours. Two days later on February 20, Amnesty International called on the Libyan leader to "end the spiraling of killings," stating that “[l]arge numbers of people are being killed and the situation is escalating alarmingly. More than one hundred have been killed so far.”

Amnesty International on February 23rd accused both the Security Council and the African Union of failing the people of Libya referencing and describing the above speech: "Colonel al-Gaddafi gave a speech in which he called protesters 'cockroaches' and 'rats', and compared the situation to China, saying that national unity had been “more important than the people of Tiananmen Square." Also in the course of the speech Qaddafi threatened to “cleanse Libya house by house”. Human Rights Watch documented beginning on February 17, 2011 on how Qaddafi's forces had opened fire on peaceful demonstrators and disappeared scores of people.

On February 25, 2011 Amnesty International called on the Security Council to refer Qaddafi to the International Criminal Court. In the video below Philip Luther outlines the egregious acts of Al-Qaddafi and Western complicity in torture:

On March 2, 2011 Libyan medical teams attempting to treat the wounded reported to Amnesty International that they were being targeted by Pro-Qaddafi forces. On March 21, 2011 Amnesty presented a fact sheet on what had turned into a conflict between pro and anti-regime forces.

The regime of Moammar Al-Qaddafi systematically violated human rights and engaged in mass atrocities. It is a pity that the opposition to the Al-Qaddafi regime would use the same methods as the dictator to dislodge him from power. It does not bode well for the new government in Libya. Early on in the conflict when the resistance chose to embark on the path of violence I wrote about the negative consequences of such a course of action and involvement of NATO forces only compounded that opinion.

Nevertheless, if I had it to do over again I would not remain silent and would once again sign the document calling for the international community to condemn the atrocities being committed against the Libyans. At the same time refusing to remain silent today when the new government commits human rights violations against former regime officials and African immigrants. To remain silent when a crime is being committed is to be complicit. 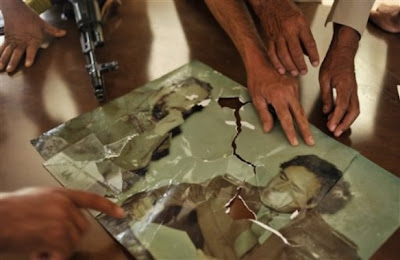 Photograph of Castro and Qaddafi. Taken from Libyan despots residence
The Libyan episode has only further proven the need to speak out in a timely manner and to also call on opposition movements to reject violence and embrace strategic non-violent conflict strategies to end brutal dictatorial regimes increasing the probability of a lasting victory.
Posted by John Suarez at 12:58 AM