"Today I was hit with a rock in the back, a helmet in my nose. I swallowed tear-gas, Carried the kid who died, and what did you do?" - Robert Redman, age 28, murdered later that same day by Maduro's security forces
Started a 24 hour fast at 7:00pm on February 11, 2015 in remembrance of Venezuelan students gun down by Maduro's state security beginning on February 12, 2014 while nonviolently protesting rising insecurity in their country.  It began on that day with Bassil Alejandro Dacosta, age 24 , who over Facebook the day before on February 11, 2014 had written: "Gentlemen, he who is here will go out tomorrow to find a better future."

Hours later on February 12, 2014 he had been gunned down. One of the youths who carried him away to seek medical assistance, Robert Redman, age 28, reported later that day over twitter: ""Today I was hit with a rock in the back, a helmet in my nose. I swallowed tear-gas, Carried the kid who died, and what did you do?" That same day he was also gunned down by Maduro's security forces and murdered. The known number today stands at 43.

Today, February 12, 2015 facing a regime that has now approved the use of lethal force against nonviolent protesters the stakes are higher than a year ago. Students and in many cases their parents and grand parents will be taking to the street today.


Maria Corina Machado explained why they are going out tomorrow:


"Tomorrow February 12,  I will go out for the young heroes of yesterday and today, who started the protests that unmasked the regime and changed the history of our noble country. See you in Caracas at 10 am at Plaza The Three Graces. We will march to the San Pedro Church where Mass will be held for the fallen."

Hard to believe that it has been one year and still the murderers of these nonviolent student protesters have not been brought to justice. 28 out of the 44 killed in the 2014 protests in Venezuela were shot. They are remembered along with the continuing demand for justice. 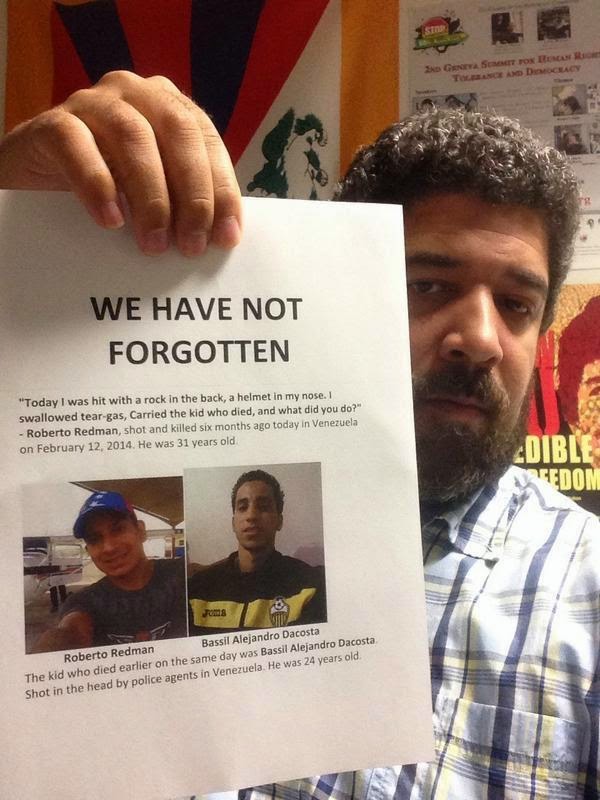