#FreeElSexto 60 days and counting: The price of performance art in Cuba

Sixty days and counting behind bars for a work of performance art that never saw the light of day. Unfortunately, dictators and tyrants by definition do not have a sense of humor. This is why totalitarian regimes are always associated with the color grey. Boldness, color, spontaneity and daring are necessary elements that bring existence to life and are often times repressed by tyrants. Laughter is especially subversive and dangerous.

Activists in Cuba and in the international community is following his plight:

On January 28, 2015 the Dutch NGO Justice & Peace outlined the circumstances surrounding his arrest. Danilo Maldonado, El Sexto, bought two pigs for an art project and wrote on them "Fidel" and "Raul" and was on his way to a public park to release them when he was arrested on December 26, 2014 before his work could be performed. Still jailed El Sexto has been indicted for "disrespect" that carries a maximum sentence of three years in prison.

The Czech NGO, People in Need revealed that, "[i]n the beginning of this year, the Cuban authorities refused his application for habeas corpus submitted by Laritza Diversent, an attorney who denounced his arbitrary detention."

From behind bars he wrote the poem below on a piece of notebook paper that was posted over twitter today:


I'm trying to decipher this
enigma to decipher each symbol.
to examine minutely the code that opens the door
to the sensitivity of hard hearts
the riddle that dilutes
the spell of the ignorance of the soul 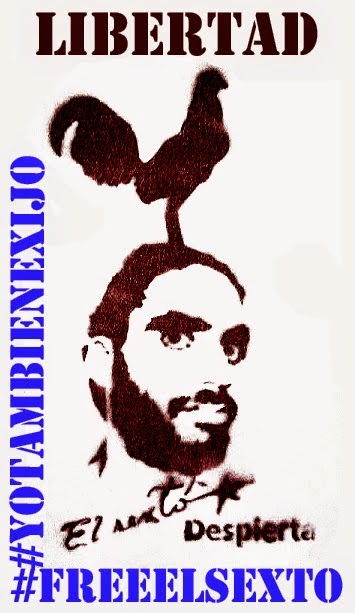