Mass to be held for her at her alma mater in Venezuela tomorrow at 9:30am


The headline in the February 20, 2014 edition of People Magazine read " Venezuelan Beauty Pageant Winner Killed in Anti-Government Protest." The beauty pageant winner's name was Génesis Carmona and she was 22 years old. She was a model who had won the Miss Tourism Carabobo beauty pageant in 2013. On her Twitter account Génesis described herself as “friendly, but not stupid!” and “passionate about life.” She was studying marketing at Center Technological University (UNITEC) and was in her last year of study. Her alma mater has announced a special service in her memory tomorrow marking the one year of her untimely death:

What happened
Génesis Carmona was marching at approximately 4:00 pm on Tuesday February 18, 2014, near Cedeño Avenue and the intersection of Carabobo, when  a group of masked gunmen on motorcycles opened fire on the demonstrators. Génesis was shot in the head in the left occipital region. She was with her sister Alejandra Carmona at the moment it happened. Alejandra in a radio interview said "I was with her, when the motorized units (of the Government), we fled running. We were stopped on a street corner, looking up and then suddenly she fell."

According to VOXXI the "22-year-old was rushed in a motorcycle to the Medical Center Guerra Mendez in Valencia, where she was operated and kept in intensive care. Less than 24 hours later on 12:14 p.m., the doctors announced that she had died from her injury.

Jorge Ramos of Univsion interviewed Gabriel Cegarra,  the young man who was holding Génesis on the back of the motorcycle as they hurried to get her to the hospital. Below courtesy of John Sexton of Breitbart is a translation of an excerpt of the interview:


Ramos: The images of the students that have lost their lives in the protests in Venezuela are impressive because, in the majority of cases, they have been shot at and they have no way of defending themselves. To these images we add this impressive photo: beauty queen Genesis Carmona being carried away as she was dying. The student is named Gabriel Cegarra, who had her in his arms to try to save her life. He joins us now via satellite from Valencia, Carabobo state. Gabriel, thank you for speaking with us. What happened that day? Where were you?
Gabriel Cegarra: We were in Cedeño Ave, Valencia. We were protesting there– the protest concentration was there. There was a large group of us there protesting normally, peacefully. All of a sudden we began to see motorcycles on the north side of Cedeño Ave. That is a steep street, and at the top of the street we saw motorcycles with, um, they were armed and over there. At first they were not doing anything, they were just there
concentrated, and we were concentrated in our part and we took note of each other. Then, all of the sudden, there were gunshots, there were three rounds of gunshots. In the third, unfortunately, a bullet hit her in the head.
Ramos: The government said, without proof, that the shots came from the opposition group itself. Do you think the shots came from an armed Chavista group?
GC: Yes, because they were the only ones who were armed. We
do our protesting with a simple tricolor hat, a white shirt– which was what we
organized for that day—
Ramos: So the official version from the government is not true from your point of view? The bullets came from Chavista groups, not the opposition? This is very important.
GC: Not from the opposition, because among ourselves, I don’t think we are there to kill each other. We were just there peacefully protesting. The motorcycles that were shooting, you could see they were armed and they had red shirts, some were black striped, but there were people with red shirts.
Ramos: You already knew Genesis. At what time did you see her get shot through the head?
GC: Yes, I knew Genesis, she is my– was my “buddy” for all life. She was my friend for five years. I realized that she was shot in the head when… I heard the gunshots from where I was, I ducked, and then when I see that she is leaning on a friend’s arms.
The friend brought her to me– it was a short route, about 5 meters, something like that– and I see that when I touch her with her left arm, which I put behind my neck, I started to feel something cold on my arm, and a doctor who was there at the protests also told me, “get on your bike and get help, she’s been shot in the head.”
Ramos: That is precisely what you did. That image and that photograph traveled the world. When you were carrying her with you on the motorcycle, she was still alive, right?
GC: Yes, she was conscious.
Ramos: She was conscious. Could she talk? Did she say something?
GC: No, she didn’t speak to me but her eyes were open. With her right hand she was pulling my shirt, as you can see in the image, and with the left hand she was pulling the shirt of the motorcycle driver.
Ramos: What did you tell her?
GC: Stay still, everything will be fine, I would do everything possible I could to arrive quickly so they could treat her, not to worry, that nothing was going to happen.
Ramos: Then you arrived at the hospital. When did you find out she had died?
GC: I found out yesterday, Wednesday, around 12:50– I was making some declarations and was not at the clinic at the moment, but I got a message simply saying she had died. It was really very sad, that moment; reading that message was nothing good. I didn’t expect that to happen.


Génesis Carmona's aunt, Martha Baron, who lives in Calgary spoke out in English concerning her nieces death on February 24, 2014 to the Calgary CBC: "I would like her to be remembered as a brave girl that died for her country. That's the only way I want her to be remembered."

Her last four tweets were re-tweets from others but give an insight into this young woman's state of mind and are reproduced below: 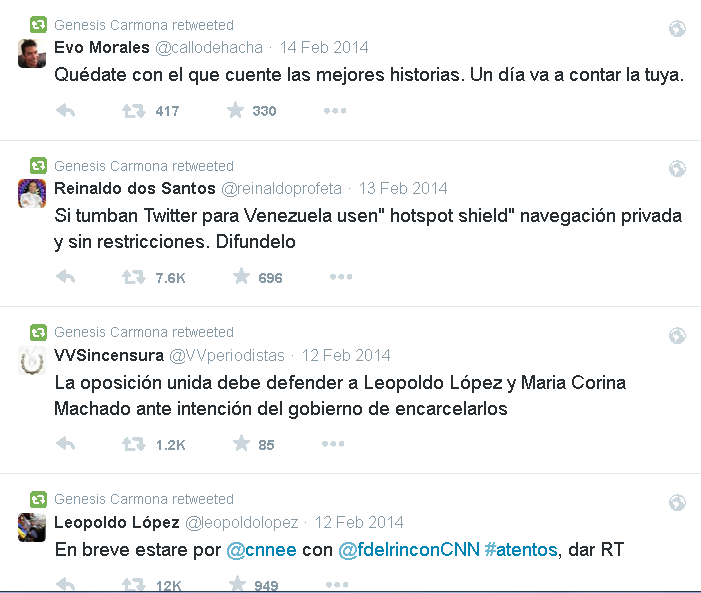 The first RT is from Leopoldo Lopez announcing that he would be on CNN in Spanish and asking for a RT which she obliged. The second from VVSincensura said that "the opposition united should defend Leopoldo Lopez and Maria Corina Machado before the intention of the government to jail them. The third from Reinaldo dos Santos gave technical advise stating "If they drop Twitter for Venezuela use a "hotspot shield" which is private navigation without restrictions. Spread the word." The last retweet from Evo Morales (not the president of Bolivia) said: "Stay with the one who tells the best stories. One day they will tell yours."

Génesis Carmona's mother, María Eugenia Tovar, and sister left Venezuela and on December 10, 2014 revealed that they are seeking political asylum and continue to demand justice for Génesis. All evidence points to the Maduro regime and its agents being responsible for this young woman's death.  Maria Eugenia Tovar, emphasized on February 12, 2015 in a sentence what that day signified for her: "Forbidden to forget our children, forbidden to forget so much pain."