"The [Cuban regime] simply wants to give the world the impression that things are changing. But in reality, while the laws that put dissidents in prison remain, we cannot talk about real changes." Laura Pollan, spokeswoman for Cuban Ladies in White 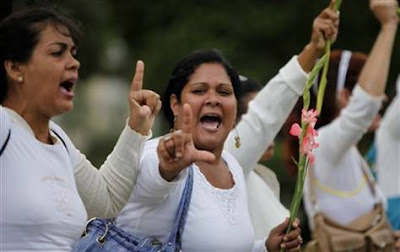 The Cuban dictatorship's self-imposed four month deadline to release all the prisoners of conscience arrested and imprisoned to unjust prison terms during the March 2003 crackdown that has become known as the Black Cuban Spring came and went six days ago on November 7, 2010.

There are thirteen prisoners of conscience from the group of 75 still in prison and coincidentally they all want to stay in Cuba and not abandon their homeland. According to Lady in White spokeswoman Laura Pollan, despite an October 23, 2010 statement by Cuban Foreign Minister Bruno Rodriguez at the United Nations alongside Spanish Foreign Minister Miguel Angel Moratinos stating that those that wanted to stay in Cuba would be released on October 25, 2010 they still remain imprisoned. Another prisoner of conscience (although mistakenly not recognized by Amnesty International) is Rafael Ibarra Roque unjustly imprisoned since June 17, 1994 and sentenced to 20 years in prison, of which he has already served 16, refused to be deported to Spain in exchange of not having to serve out the remaining 4 years of his prison sentence.

The spokeswoman of the Cuban Ladies in White, Laura Pollan, whose husband Hector Maseda is one of the 13 refusing to go into exile and still imprisoned, in a video produced by the New York based Human Rights Foundation offers a thorough analysis of the situation.

At the same time as the prisoners of conscience who wanted to stay are denied their freedom; the mother of the murdered Cuban prisoner of conscience Orlando Zapata Tamayo, Reina Luisa Tamayo, is made an offer to go into exile with her family. This offer is followed up with an intensification of harassment and physical violence against Reina and her family.

The Cuban dictatorship's gambit is to force the opposition leadership and their families into exile using both violence and prison combined with the option of exile as leverage to bring massive pressure to bear down on these Cubans who desire to continue their efforts in Cuba to defend human rights and advocate for a democratic transition. It is a Machiavellian maneuver worthy of Fidel Castro. Raul Castro's actions are a carbon copy of his brother's using innocent human beings as bargaining chips to maintain the family business afloat: totalitarian despotism.

With all apologies to The Who: the New boss same as the old boss.

Cubans on the island know this and the courageous women in the Ladies in White, despite brutal repression reminiscent of that suffered by German women decades earlier in 1943 at Rosenstrasse, against all odds have continued to march and demand their loved one's freedom since March 2003. The regime tried to use brute violence in March-April of 2010 and failed. This combined with the death of Orlando Zapata Tamayo on February 23, 2010 forced them to negotiate with the Ladies in White using the Catholic Church as a mediator. Something the regime never wanted to do. Now they are confronted with the unexpected: 14 men willing to defy the regime's blackmail opting to remain under brutal prison conditions rather than go into exile. Months have already passed and they have stood firm. Their civic defiance is heroic.

Now with the regime's own deadline not having been met and one of the 13, Diosdado Marrero, preparing to go on a hunger strike and the opposition planning to step up protests in the streets to demand the prisoners' freedom the regime's pressure is countered. In addition the Ladies in White have asked Pope Benedict XVI to "press Havana for the release of 13 prisoners." Within hours of Diosdado Marrero announcing that he had started the hunger strike a state security agent visited him and told Diosdado that the 13 would be freed within 15 days to a month. With the positive response he ended the strike. Only time, and international attention and solidarity, will determine how all of this will turn out.
Posted by John Suarez at 2:33 AM