We have just heard several council members defend and justify the actions of Syria's regime. In doing so, they breach their pledge to promote human rights, and place their own membership credentials in question. - Hillel Neuer, UN Watch, March 1, 2012 addressing the UN Human Rights Council

Earlier today in Geneva, Switzerland at the United Nations Human Rights Council where a Special Session on the deteriorating human rights situation in Syria with a special focus on the massacre in El-Houleh the Cuban regime and its allies took a stand against holding the Syrian regime accountable for its gross and systematic human rights abuses.

One week ago today al-Assad's militias and troops in Syria carried out a massacre of more than 108 people in El-Houleh. Most of the victims were women and children. International monitors who visited the town made preliminary findings pointing to the Syrian regime.

Statement by High Commissioner for Human Rights, Navi Pillay (delivered on her behalf by Marcia Kran, OIC, OHCHR) - 19th Special Session of the Human Rights Council on the "deteriorating human rights situation in the Syrian Arab Republic and the recent killings in El-Houleh" made on June 1, 2012.


The regime in Cuba presided over for the past 53 years by Fidel and Raul Castro has engaged in the systematic and wholesale violation of human rights in Cuba while at the same time collaborating with many of the worse human rights violators around the world in a sinister coalition of impunity. 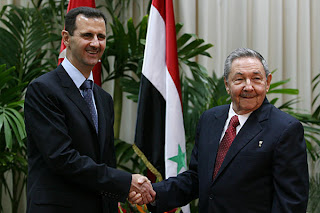 The Castro dictatorship has been a steadfast apologist for systematic human rights violations not only with friendly regimes such as China, Venezuela, Syria, Libya, Ethiopia, Sri Lanka and Iran but also with adversaries such as the military junta in Argentina and in the beginning even with their supposed enemy the United States over Guantanamo.

This is not a coincidence but a strategy for the dictatorship's survival. 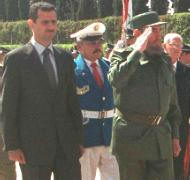 Despite the debate over Syria at the United Nations Human Rights Council having exposed the brutal nature of the regime and its allies to the world. The apologists continue to argue that things have changed in Cuba while in reality it remains the same. Time and time again the Cuban dictatorship has defended murderous regime's such as their Syrian allies. Twenty three years ago on June 4  it was the Cuban regime in Havana that expressed support for Beijing's slaughter of protesters in Tiananmen Square with the Cuban foreign minister commending Chinese authorities for "defeating the counterrevolutionary acts."

Only three countries voted not to condemn the al-Assad and his regime in Syria at the UN Human Rights Council today: China, Cuba and Russia. All three regimes have been documented as committing atrocities, but will focus on China and Cuba. 37 Cubans mostly women and children were massacred on July 13, 1994 by Castro regime agents who sank their tugboat while trying to flee the island. Thousands of Chinese students and workers massacred in Beijing on June 4, 1989 following the student protests in Tiananmen Square.  This leads to a question: How are these countries members of the United Nations Human Rights Council? Russia has thousands of nuclear weapons and China is a huge economic power both leave a big foot print in the world and their presence can be explained through brute power, but what about Cuba? This places the regime in Cuba in a precarious position. The torture and murder of Cuban nationals is their Syrian problem and is placing the Cuban dictatorship under increased scrutiny.