We cannot celebrate Human Rights Day here in Cuba. We can't because they repress us and beat us. Right now there's an act of repudiation in front of the Ladies in White headquarters." - Bertha Soler, Lady in White, The Associated Press, December 9, 2011 International Human Rights day in Cuba, unlike many other parts of the world, is cause for hope not celebration. Hope that one day soon the human rights of Cubans will be recognized and respected. Hope that the international community will speak with one voice and tell the dictatorship in Cuba that Cubans have a right to their rights.

On December 9, 2011 Amnesty International issued an urgent action for Ivonne Malleza Galano arrested on November 30, 2011 while engaged in a nonviolent demonstration demanding that human rights be respected in Cuba. As of today her whereabouts remain unknown.

It wasn't always this way. 63 years ago Cuban diplomats representing a democratic Cuba assisted in the drafting and passage of the Universal Declaration of Human Rights (UNDHR). Despite the claims of the dictatorship in Havana, the UNDHR is a document profoundly influenced by the Latin American tradition.

Over the past half century the Cuban regime has and continues to work to undermine and make irrelevant the Universal Declaration of Human Rights both inside and outside of Cuba. In places like Syria, Libya, Sri Lanka, Venezuela, Ethiopia, China and Argentina (regardless of ideology) the Castro regime has defended and collaborated with some of the worse human rights violators on the planet. However, in 2011 around the world people stood up for their human rights and many achieved the long sought goal of overthrowing tyranny despite the protestation of the Castro regime and its allies.

Meanwhile, the reality in Cuba is that over the years International Human Rights day in Cuba has been a time of repression and political terror against nonviolent activists. This year is no different over the past nine days at least 241 people have been arrested according to reports that have reached Roberto Guerra of Hablemos Press .

Nonviolent activists in addition to being subjected arbitrary detentions have also suffered brutal beatings leaving one human rights defender bleeding with a dilated kidney and another with a growing cyst in the back of her head. At the same time medical treatment has been at best negligent if not malicious. On October 14, 2011 Laura Pollán died one week after being admitted to a Cuban hospital under unusual circumstances.

Meanwhile many claim that progress is being made because the regime has engaged in some privatizations. Without private property rights to protect the poor and politically marginalized; privatization is a euphemism for the expropriating the poor. 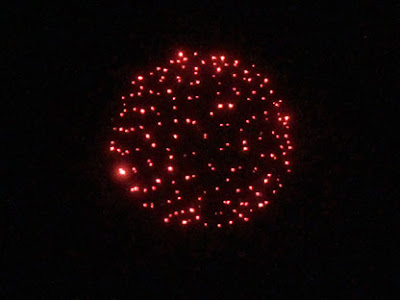 Fireworks set off by a coalition of Cuban exiles from boats anchored 12 miles (19 kilometers) from the Cuban capital, just outside Cuba's territorial waters. (AP Photo/Franklin Reyes)

Fireworks celebrating the International Human Rights Day were set off in international waters by a flotilla of boats led by the Democracy Movement and declared a provocation by the dictatorship. Associated Press journalists who attempted to interview Cubans along the Havana sea wall observing the fireworks were attacked by government organized mob.

The days leading up to International Human Rights Day on December 10 have been filled with human rights violations in Cuba. Unfortunately, it appears that the Castro regime will repeat its tradition of systematically violating human rights on human rights day.

Cuban human rights defenders maintain their steadfast hopes that this will change but know that there is much work yet to be done to see that International Human Rights day is once again cause for celebration and not repression in Cuba.
Posted by John Suarez at 2:06 AM