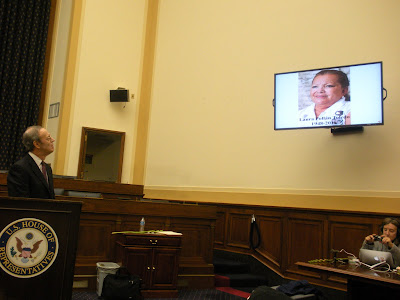 Democracy Service Award ceremony for Laura Pollán
Yesterday, December 14, 2011 marked two months since a mysterious and sudden illness claimed the life of Cuban human rights defender Laura Pollán at a Havana hospital in Cuba. It was also a day of celebration of her life and work on behalf of Cubans as well as friends and family recognizing Laura's martyrdom simultaneously in Havana and Washington DC. 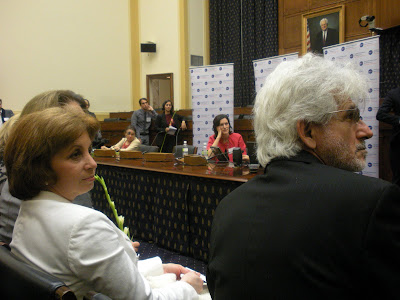 Yolanda Huerga, representative of Ladies in White in the United States and her husband former prisoner of conscience Manuel Vasquez Portal
Laura Pollán was posthumously awarded the Democracy Service Medal by the National Endowment for Democracy in House Foreign Affairs Committee Room in the Rayburn building. 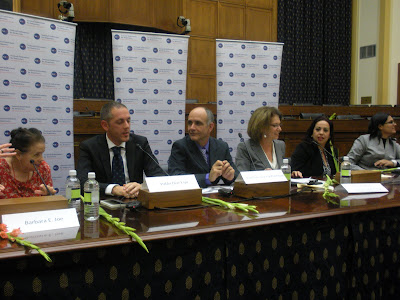 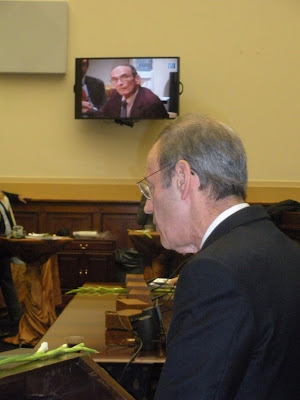 NED's Carl Gershman listening to remarks by Héctor Maceda in Havana
Additionally, there was a live feed from the US Interests Section in Havana with Laura's husband, Héctor Maceda, and daughter, Laura María Labrada Pollán, present as well as the new leader of the Ladies in White, Berta Soler who addressed the gathering.

For us, we feel that we must be the heirs of the example and the experience of the woman who founded, encouraged and gave international recognition to our group’s struggle for political prisoners, human rights, progress and opportunity for all. The awarding of this medal to Laura Pollán is the clear expression of the understanding and solidarity that we have received from the population of the Unites States throughout all these years of peaceful struggle against a Communist dictatorship that continues to batter our country.

This award arrives in a moment when the figure of Laura Pollán is becoming more present and powerful in our movement; at the hour when we have extended our presence to the other provinces of Cuba and have, with each passing day, a greater degree of popular support that the Cuba regime cannot deter.

This award to Laura Pollán is yet another element that obliges us to strengthen ourselves and to work united by our diversity, with respect for all opinions, devoted to our literary encounters, our prayers, our attendance at mass, our public marches, in which we are armed only with our passion for freedom and the flowers that symbolize our peaceful nature.

Thank you, dear friends, for this medal. It honors the personal path of Laura Pollán’s life and reaffirms the commitment of the Damas de Blanco to continue our work for love and freedom. 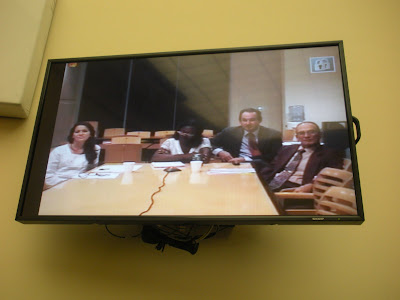 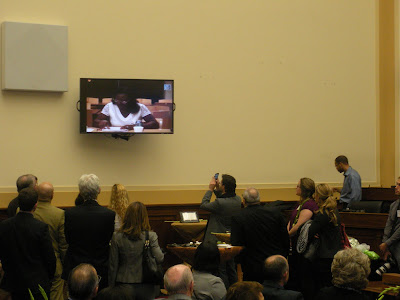 Berta Soler addresses the award ceremony
President Obama sent a message, with a message that Capitol Hill Cubans described as in poor form, but none the less honored Laura. The statement issued by the State Department, a day after her untimely death was excellent.

Past winners of the award include Lech Walesa, Lane Kirkland, His Holiness the Dalai Lama, and Vaclav Havel. Also sharing the award with Laura in 2011 is Floribert Chebeya who was murdered in the Democratic Republic of Congo in 2010 for criticizing violent repression in that country. 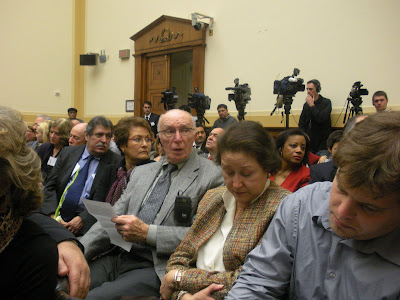 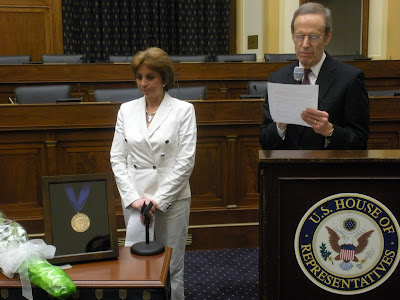 Carl Gershman presenting the award to Yolanda Huerga, representative of the Ladies in White in the United States

Difficult struggles lie ahead, but the period of darkness is drawing to a close, and the light that is shining in the distance glows with the memory of Laura Pollán. She was a simple woman – a mother, a housewife, a teacher, someone who loved literature. Until her husband Héctor Maseda Guitiérrez was arrested along with 74 others in the Black Spring of 2003, she was not political. But from the moment he was taken away, she had a mission – to free her husband – and to do so, she rallied other women whose loved ones had disappeared to form the Damas de Blanco. Weekly they marched, dressed in white and carrying gladioli, the garments symbolizing the purity of their motives and the flowers their integrity and moral strength. And when they chanted “Libertad,” they did so not just for their husbands and fathers and sons and brothers, but for Cuba itself.

The regime reacted to their peaceful marches with violence and venom. The women were insulted, called traitors and mercenaries, and attacked by shock mobs. But they persisted, and as they did, their reputation and moral authority grew in Cuba and throughout the world.

Then, on September 24, when the women were being shoved and beaten by one of these mobs, Laura was personally attacked by an agent of the State Security. She fell into critical condition just eight days later and died on October 14, a martyr in the cause of freedom.

While people throughout Cuba mourned the death of Laura Pollán, the government responded with “infinite ideological rancor,” in the words of Yoani Sanchez. “Laura is gone,” she continued, “and now all the acts of hatred against her resonate even more grotesquely. Laura is gone and we are left with a country slowly waking up from a very old totalitarianism that doesn’t even know how to say ‘I’m sorry.’”

Yes, Laura is gone, but her memory lives on the hearts of Cubans. Her example of dedication to justice inspires others to fight on. The purity of her motives, the strength of her character, the depth of her integrity, and the force of her fearlessness will light the way forward. Her legacy will help Cubans build a new morality after more than half a century of political bondage, poisonous hatred, and dehumanizing lies. For all she did in her life that ended too soon, and for giving her last full measure of devotion to the cause of “Libertad,” the National Endowment for Democracy is honored to present posthumously to Laura Pollán its Democracy Service Medal.

Following the statement by the National Endowment for Democracy president the representative of the Ladies in White, Yolanda Huerga approached the podium and gave a moving acceptance speech of which an excerpt is translated below (original Spanish is online here) :

Today, exactly two months ago the heart of Laura Pollan, overflowing with love for Cuba, stopped beating, but her death, far from dividing the Ladies in White, strengthened and multiplied them throughout the island

If I were asked to define her character would say, she was like marble, white and strong.

Her husband and mine were colleagues of the same independent news agency, but neither she nor I had matured, then the confrontation with the dictatorship, Cuba's Black Spring united us, and cemented a friendship that was consolidated in the fray, in the fear of reprisal.

Often I cry for Laura. I miss her as a friend and above all her honest sincerity that sometimes surprised and sometimes irritated.

In the intense moments that she had to confront I saw her hardness of alabaster, her unwavering firmness and her serenity and her sense of humor flower when at every minute her life was in danger, mocking the oppressors and making them look ridiculous.

With her leadership the movement of the Ladies in White was no longer a group of women sending letters and making public statements, each one on her own, cohering definitely into a block where everything is decided by consensus and respect each one's opinion.

The Ladies in White, under the leadership of Laura, after succeeding in its first commitment: to see all prisoners released from the Group of 75 and other political prisoners and having reached an international visibility, that we never imagined at the outset, when we were a small group of women beginning our fight against the totalitarian regime, have been redefined as a force for defending human rights and democracy in Cuba.