Amnesty Int'l: 2 Cuban prisoners of conscience released on bail to await trial on trumped up charges arising from peaceful protests 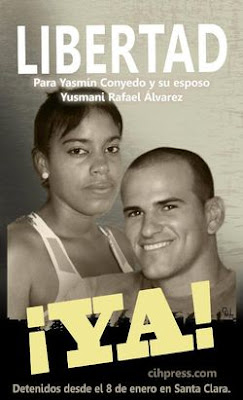 PRISONERS OF CONSCIENCE RELEASED ON BAIL

Two Cuban prisoners of conscience have been released on bail to await trial on trumped - up charges arising from their joining peaceful protests.

Prisoners of conscience Yasmín Conyedo Riverón and her husband, Yusmani Rafael Álvarez Esmori, were released on bail late in the evening of 5 April, after nearly three months in prison. They had been detained on 8 January and charged with using “violence or intimidation” against a state official (atentado). An official from the Cuban Communist Party (Partido Comunista de Cuba) had falsely accused Yasmín Conyedo Riverón of slapping her in the face, and later withdrew the accusation.

No date has been set for their trial. If convicted, they could face up to eight years in prison. Amnesty International has called on the Cuban authorities to drop any charges against Yasmín Conyedo Riverón and Yusmani Rafael Álvarez Esmori relating to their peaceful exercise of their right to freedom of expression.

Amnesty International will be monitoring their situation closely, and will take further action as appropriate.

Text available both in Spanish and French