Cubans have lost the physical presence of one of the great leaders of the Cuban exile community who passed away yesterday night at the age of 83 but his spirit and his writings live on. Bishop Agustín Román wrote and spoke about the challenges facing the Cuban people and in the first part of this December 16, 2006 reflection offered a profound analysis of the state of the Cuban dissident movement that remains extremely relevant. This is the first part of an English translation. Parts two and three are available online. The original Spanish text is available here. 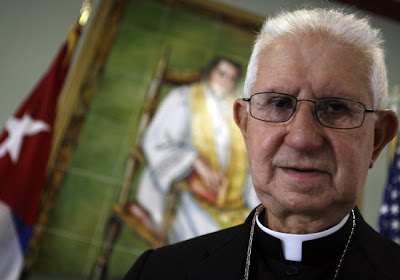 The importance of the current internal dissident movement in Cuba (Pt. 1)
by Mons. Agustin Roman

Less than a week ago we celebrated the date of December 10, the anniversary of the proclamation by the Organization of the United Nations of the Universal Declaration of Human Rights, a document that is growing in importance over the years, because in it achieved capturing a strong recognition of the dignity of the individual without limitations of race, nationality or belief and without limitations of time and place either, as the same is true for all times and all peoples.

Clearly this being the statement of a secular and supra-confessional organization, there is no religious reference in that statement whatsoever. However, the men of faith and even those without being religious who have followed the development of the human race from its beginnings to the present, it is not difficult to find the source of the underlying principles of human belief about their own dignity and inherent rights in their relationship with God, a god who in almost all major religions demonstrates providence, attentive to the needs of his creatures and possessor of a clear sense of the just.

On the other hand, the important role the delegation of the Republic of Cuba to the United Nations in 1948 in the drafting and promulgation of the Universal Charter, particularly by Drs. Dihigo Ernesto, Guillermo Belt, and Guy Perez Cisneros is a historical fact.

So for me, being Cuban and Catholic, it is an enormous privilege that our beloved and respected Father Felix Varela Foundation, invited me to share with its members and friends some thoughts on the importance of current dissident movement in Cuba, as this issue cannot be properly addressed without relating it directly to the Universal Declaration of Human Rights. It's good, then, do so now, as part of the celebrations for the 58th anniversary of the proclamation and it is urgent to do so also by the special circumstances faced by the Cuban nation in these moments.

Thanks, then, to the Father Felix Varela Foundation to create a favorable atmosphere for this opportunity to carefully and sensibly that we must seize to look carefully at the past and present of our people to learn and understand what is necessary in order that each of us can be a facilitator of a future in which that document becomes an invaluable guide of coexistence among Cubans. If we achieve that, we will be implementing in the field of civic, what the Lord previously synthesized in his new command as a compendium of his doctrine: "Love one another as I have loved you."

The dissident movement inside Cuba is something new in its methods, but is part of a tradition as old as the recorded history of the island following the discovery: the search for justice, which is equivalent to what we now define as respect for human rights. Colonization had barely started under the command of Diego de Velasquez, when he encountered the determined resistance of indigenous groups, that if we take into account their peaceful nature, and lack of coordination between different tribes in remote villages separated from each other, we have be described as remarkable, though doomed from the outset by superior numbers and armaments of the colonizers. Those Tainos were guided by the natural light that makes man differentiate between right and wrong.

Since then and even before it was surfacing the idea of the ​​Cuban as something other than Spanish, a strong sense of justice was taking over increasingly growing segments among the inhabitants of the "ever faithful Isle of Cuba", subjected to the arbitrariness of the representatives of the Crown, to the point that all students of this subject agree that that was precisely what eventually shaped the "criollo" as being different from the "peninsular."

The early rebellions of the miners of El Cobre and the planters of Jesus on the Mount in the first half of the eighteenth century, the preaching of learned men who today identify as founders of our nationality such as Father Varela, Luz y Caballero, Saco, etc.., and the first separatist conspiracies and attempts, often encouraged by Creoles of high economic status, we further indicate that the aspiration to justice was shared by men and women of all races and social strata. All this crystallizes in the Ten Years War, at whose beginning Carlos Manuel de Cespedes, after appealing to the "God of our consciousness with his hand over his heart," declared, "we believe that all men are equal, we love tolerance, order and justice ... "and later consolidated in the War of Independence, when José Martí summarizes the purpose of it saying that he wanted that "the fundamental law of the Republic be the respect of each Cuban for the full dignity of man. "

Later, over the 56 years since the establishment of the Republic until 1 January 1959, we see that the desire for justice is growing and it is the engine of social progress in Cuba. Under its influence popular laws arise, powerful labor movements, political groups, educational institutions, and social work. Early on it achieved the recognition of the right of women to vote, the eight-hour workday, the concept of equal pay for equal work, etc.. Persistent evils such as public corruption, racial discrimination and the marked economic differences between rural and urban areas, always found it rejected by citizens. The Constitution of 1940 and its complementary laws, not always obeyed, are on the path of achieving justice. The political-philosophical debate between liberals, conservatives, marxists, social democrats, etc... is a debate designed to show which proposal is closer to what is right. Cuban Catholic Action in the mid-1950s, an emerging force that proposes the Social Doctrine of the Church as an ideal vehicle for those aspirations.

These aspirations centered on demands such as the restoration of constitutional order, the cleaning up of public administration, etc.., are what were moving the large Cuban majorities support of the revolution that came to power on the first day of 1959. These same aspirations for justice are what make this euphoria quickly fade, like a soap bubble, before the marxist twist of the revolution. As early as November 1959, the Civic Plaza in Havana is filled with Catholics who, at the foot of the venerated image of Our Lady, Patroness of Cuba under the beautiful title of Our Lady of Charity, cry out loud "Social Justice, yes, communism, no! ". Then began another new and bloody stage of struggle for Cubans, this time against an enemy unknown in its cruelty and underestimated in its audacity. But again the ideal of justice moved Cubans to a heroic and at the same time extremely painful confrontation, as civil wars always are.

Without calculating risks or measuring the chances of success, those with "hunger and thirst for justice" faced a totalitarian despotism that did not hesitate to take thousands of compatriots before firing squads, and filling the prisons. The cries of "Viva Cristo Rey!" were the best evidence of the most just motivation of that struggle, which had memorable episodes at the Bay of Pigs, in the mountains and plains around the country and in urban centers where, according to the mentality of the times, tradition, and what appeared to be logical, it saw the armed violent struggle as the only way to get one day, paradoxically, the Republic that, together with Martí, we dreamed cordial, "with all and for the good of all."

By the mid-60, the magnitude of the repression, the support of the Soviet camp of the oppressors, the abandonment of those we believed allies of the fighters for democracy and the complacency of a world, many of whose leaders and thinkers believed fatally destined to fall into the Communist orbit, crushed in Cuba the active resistance. The Camarioca exodus in 1965 and subsequent "Freedom Flights" gave the mortal blow to the brave and sacrificed Cuban underground.

It continued, yes, the quiet individual resistance of the worker who broke his machinery, of the desperate one who painted a sign, or the old woman who, despite the consequences, went to Church.

It was like this up to January 28, 1976. If one were to put a date at the beginning of the active dissident movement within Cuba, it would have to be this, the day that it was consituted that is more or less diffuse, the Cuban Committee for Human Rights, founded by Ricardo Bofill and a small group of collaborators.

Not that before that date there were no dissidents. There where, many and very prominent, such as President Manuel Urrutia, Prime Minister Miro Cardona and commanders Huber Matos and Pedro Luis Diaz Lanz, just to name a few among the many who, in turn, denounced in word or deed the marxian entrail of castroism. But they ended up in prison or in exile, while many others, like the unforgettable Porfirio Ramirez, died in an unequal struggle in the mountains of Cuba. The Cubans had not yet discovered the feasibility of the nonviolent struggle as an instrument of liberation.

Underlining its membership in the historic struggle of the Cuban people for justice, the Cuban Committee for Human Rights comes to light on the anniversary of the birth of Martí and cite Father Varela as one of the inspirations of their founding document. It's the same struggle, but it is boldly different: it seeks justice, but by peaceful means. The concept of nonviolent civil resistance is introduced into the history of Cuba. Take the truth as a weapon, placing it in practice in the civic field, what Scripture proposed in the spiritual realm: "the truth shall make you free". Hence its importance at that time and its transcendence for the future of Cuba.

One must note that during all that time, before and after the emergence of active internal dissent, exile was, and remains so today, the "other lung" of the Cuban people's struggle to reclaim their rights, the "other trench," which has resisted since day one, with possibilities and without them, with hits and misses, but with exalted fidelity, totalitarianism's attempts to be made permanent in Cuba. Almost all the leaders of the dissident movement also recognize that without the support of the exiles, it would not have been possible to carry out their work, or even survive.