Bishop Agustín Román: The force of reason is, and should be more powerful than the reason of force.

Cubans have lost the physical presence of one of the great leaders of the Cuban exile community who passed away yesterday night at the age of 83 but his spirit and his writings live on. Bishop Agustín Román wrote and spoke about the challenges facing the Cuban people and in the second part of this December 16, 2006 reflection offers a brief history of the development of the nonviolent Cuban dissident movement that remains extremely relevant. This is the second part of an English translation. Parts one and three are also online. The original Spanish text is available here. 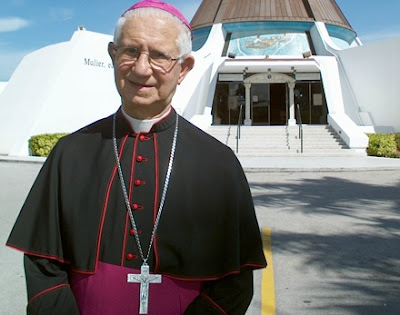 The importance of the current internal dissident movement in Cuba (Pt. 2)
by Mons. Agustin Roman

What began at that scrawny Cuban Committee for Human Rights, that many classified as quixotic, is at present a notable force due to their courage, their determination and their moral authority. It is not a massive movement, but it is the largest of those who have been in any of the countries which were subjected to communist totalitarianism throughout the world.

Also, it is very diverse, it includes in its ranks Cubans of all social strata of the country, medical doctors like Dr. Oscar Elias Biscet, engineers such as Oswaldo Paya, lawyers like Rene Gomez Manzano, economists such as Marta Beatriz Roque, poets like Regis Iglesias, educators such as Roberto de Miranda, philosophers like Jaime Legonier , ex-military such as Vladimiro Roca, peasants like Antonio Alonso, trade unionists such as Carmelo Diaz , housewives like Berta Antunez, and simple country people such as the brothers Sigler Amaya and many more.

Among them are whites, blacks and mulattoes, Catholics, Protestants and Santeros, liberals, conservatives, christian democrats, socialists and all other non-Communist political denominations. And they are from the extreme western end of the island, as the Pro-Human Rights Party, in Guane, to the extreme eastern end, as the Youth Movement for Democracy in Baracoa.

In its shadow and with its momentum has been reborn in notable measure the civil society of the nation: journalists, librarians, cooperatives, professional associations, farmers, workers, artists, intellectuals and independent disabled, among others.

They have achieved international recognition at very high levels, as witnessed by major prizes for the promotion of human rights granted to different activists by the European Union, non governmental organizations and other institutions in different countries. What is more important, every day they earn more respect among their fellow citizens.

It should be noted, also, that in Cuba, as elsewhere, important semantic differences that had importance in the past have been erased. Today, in the Cuban context, opposition and dissident are synonymous, because under the classification of "dissidents", "dissent" or "the human rights people," as the general population calls them, it includes persons such as Oswaldo Payá , for example, who never belonged to the ranks of the regime, and others who believed for more or less time in the mirage of the revolution.

We can say, therefore, that the current internal dissident movement is a vivid display of the entire Cuban nation and that it is, today, the most important agent of change within the island. In it is fulfilled the parable of the mustard seed, thus from a tiny seed has emerged a corpulent tree. It would not be prudent to exaggerate their importance in terms of the correlation of forces with the dictatorship, but neither would it be to ignore its potential as channeling the desire for justice, now widespread at the popular level, that originated when those desires were expressed by only a few.

The dissident movement does not have an effective articulation throughout the Cuban territory, but I don't think it is an exaggeration to say that it demonstrates already the ability, when the moment arrives and with adequate support, power, together with other independent bodies, religious and fraternal, that offer answers to peremptory uncertainties, the instability and initial disorder that inevitably accompany any significant change in a previously totalitarian society.

In summary, since the issue has arisen: if they ask me what the real importance of the current internal dissident movement, I would say it is the Cubans having revealed to themselves the possibility of banishing violence from political struggles and the effectiveness of non-violent methods in the pursuit of justice.

Cuba inherited old concepts which indicated that the only honorable way to resolve grievances and disputes was through blood, however evident it is today that to win by force means that it is the stronger or the better armed then the other, but not that one necessarily is in possession of reason or rights. The armed or physical confrontation became erroneously, the only acceptable proof of courage and honor.

That mentality which ferociously pushed Spaniards and their Cuban sons to confront each other when the latter justly demanded their independence, continued to mark the Republic, and that is how we saw patriots who won indisputable merits out in the fields confronted each other afterward with the same violence because of political disparities or ambitions of power, providing our nation’s history with very sad pages like the death of Quintín Banderas in the times of Estrada Palma, the racial and veterans confrontations during the government of José Miguel Gómez and the excesses of the government and the opposition during the Machado eras.

It is not wanting to judge by modern parameters, and in the light of experiences they had, to people acting according to the culture of their time and by what they had learned as good and honorable, and who, on the other hand, well are indebted for much good that they did. This is an attempt to dispassionately understand this harmful and counterproductive tradition of violence that caused rivalries and grievances passed from generation to generation, without the possibility of solution. There was always a debt to settle, and it was paid off with blood, the blood of brothers.

Along with this, we must clarify that none of this implies that one can condemn a people at one time if he is forced to resort to violence in an extreme situation, as sometimes one resorts to an amputation to avoid death, especially where the obstinacy of the oppressors shuts out all other attempted solution. Countries, like persons, have the right to defend themselves against aggression. This resort to non-desired violence, has, nevertheless to be imposed temporarily by circumstances, and not be a favored option, much less a practice or method of justifiable struggle.

The syndrome of violence that marked our Republic and to which I referred to earlier, has had its most cruel expression in the present regime. We can never forget the executed by firing squads, the tortured, the fallen in combat, those murdered while trying to escape the island. We can not nor should we forget the experience of living in fear, the heroic Calvary of political imprisonment, nor the horror of the acts of repudiation. It is precisely out of respect and gratitude to the fallen and what we have all suffered that we have to fight for their grandchildren and the grandchildren of all Cubans of the present, can live a different Cuba to the one we had to live in both them and us. A Cuba where the problems are resolved "among Cubans" in harmony and civility, not by some imposing it on others. A Cuba, finally, "where the first law of the Republic is the respect of each Cuban for the full dignity of man."

The conduct and methods that sunk Cuba and keep it under to the present, are not the ones that are going to save it. To assume the thankless task of trying to break the burdensome legacy of violence is the greatest merit of the dissident movement, because, if achieved it would be an inestimable good for Cuba, not only for today and for us, but also for the future, for those who are still to come.

More concretely, I would say that the greatest importance of the internal dissident movement in Cuba today, is that it has proven that political action can be consistent with what conscience knows and that is that the force of reason is, and should be more powerful than the reason of force.