A tale of two brothers and their sister

"You have to pay a great cost but it is worth it to pay it. Because when you live in a nation when the most elemental rights are violated to submit to it, I think is to pay a greater cost then to confront those who violate those rights. That is to say that I have made mine a phrase by Henry Thoreau, the North American writer. I used it a lot in prison when they asked me why I didn't accept the proposal made to me to leave the country in order to leave the prison. I always said, like Thoreau, that in a country where fundamental rights are violated the best place for an honorable man is a prison. I preferred prison to being on the street and witness that my people's rights are being violated and do nothing." - José Daniel Ferrer García, February 13, 2012 Estado SATS 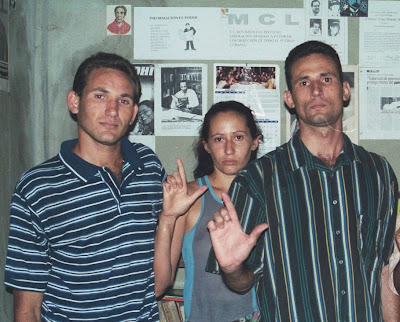 The Castro regime wanted to execute José Daniel Ferrer García in 2003 requesting the death penalty in a show trial but the international outcry caused them to back down and sentence him to a 25 year prison sentence instead. After the untimely and sinister death of Cuban Lady in White founder, Laura Inés Pollán Toledo on October 14, 2011 the threat to José Daniel's life cannot be underestimated. Like Laura Pollán,  José Daniel has a nonviolent strategic vision and an ability to mobilize and organize people combined with great courage. He has founded the opposition movement the Patriotic Union of Cuba. In the midst of a violent crackdown in August of 2011 Jose Daniel Ferrer Garcia made the following call to action for a free Cuba over twitter:

Yoani Sanchez in her latest blog post: “Why José Daniel?” has written a beautiful and moving tribute about José Daniel Ferrer García, a brave hero, describing his relevance and current threat to the Castro regime but much more needs to be said about this courageous man and his equally brave brother Luis Enrique Ferrer García and sister Ana Belkis Ferrer García.

They were born into a working class family in the neighborhood of Manganeso in Santiago de Cuba. Fisherman, who like their Biblical counterparts, became the fishers of men. Both brothers began their activism in the opposition in the Movimiento Cubano de Jóvenes por la Democracia (Cuban Youth for Democracy Movement), and by the mid nineties had become members of Movimiento Cristiano Liberación (Christian Liberation Movement), as a leader of which José Daniel emerged in Santiago de Cuba and Luis Enrique in Las Tunas.

Both Jose Daniel and Luis Enrique were regional leaders who also became regional organizers of the Varela Project. They both played in important role in persuading and organizing other Cubans to knock on doors and get their fellow citizens to sign their names and giver their identity numbers in a petition demanding democratic and human rights reforms to the Cuban Constitution. Ten years ago this May 10, the first batch of 11,020 signatures were turned into the National Assembly. Less than a year later the majority of the organizers of this initiative were rounded up beginning on March 18, 2003. Seven months later more than another 14,000 signatures were turned in.

Both Ferrer Garcia brothers would face summary trials and a hostile courtroom. Both men demonstrated their courage during their respective show trials.

During Luis Enrique’s show trial on April 3, 2003 in Las Tunas, the tribunal asked him if he had anything to say in his defense. He stood up and explained to the regime’s representatives what the Varela Project consisted of: an independent citizen initiative that sought a referendum to reestablish basic rights. At the end of his explanation he invited them to sign the petition stating, “Because this is a project open to all Cubans.” Luis Enrique Ferrer received the longest prison sentence of all of those arrested in the March 2003 crackdown. He was sentenced to 28 years’ imprisonment. He was transferred from "El Típico" provincial prison in Las Tunas to the Combinado del Este prison after being involved in a protest with other activists caught up in the March 2003 crackdown.

In the case of José Daniel Ferrer García, Cuban officials had announced that they would seek the death penalty against him because of his leadership position in the Project Varela initiative and its national impact. At his show trial José Daniel explained that he was willing to die for his convictions but that he did not think that they had the guts to do it. He was sentenced to 25 years in prison. Despite the harsh conditions and constant harassment by prison officials he continued his nonviolent resistance activism.


Ana Belkis Ferrer García in 2010 denouncing treatment against her imprisoned brothers by the regime.

With both brothers in prison their sister Ana Belkis Ferrer García became active in the Ladies in White, a group of women that came into existence during the 2003 Black Spring and sought the freedom of their imprisoned loved ones. Confronting violent mobs with nonviolent resistance and persistence in regular protests and actions to demand their freedom. She would engage in solidarity hunger strikes when her brothers had gone on hunger strike do to some mistreatment they were suffering in order to highlight their plight.

José Daniel refused to be forced to choose between prison and exile. Luis Enrique suffering from ten chronic pathologies held out as long as he could but left with his wife and some of his family for exile while José Daniel remained in prison. They paid a price for wanting to stay. According to the agreement announced by the Catholic Church the last of the prisoners were supposed to have been freed on November 7, 2010 and Luis Enrique was only released into exile on November 19, 2010 and Jose Daniel was one of the last two of the group of the 75 to be released on March 24, 2011. Unlike many others who were taken from their prison cells to the airport, José Daniel was one of 12 who left his prison cell and returned home eight years after being unjustly imprisoned in The Black Spring.

His brother, Luis Enrique Ferrer García, campaigned for his release from exile and spoke at an international human rights conference in Geneva calling for his brother’s freedom. This also led to Jose Daniel's wife frustrated and outraged undergoing a hunger strike to demand her husband’s freedom. More than four months after the deadline he was finally released after more than eight years. Since the latest detention of José Daniel Ferrer García on April 2, 2012, his brother Luis Enrique has organized a campaign for his release and is tweeting both from his own account and his brother’s twitter account to raise awareness and solidarity.

Please be vigilant with regards to the plight of José Daniel Ferrer García and speak up for him because his life may very well depend on it. After 24 days in detention, Cuban officials have yesterday finally made known that they plan to accuse José Daniel of "public disturbances."

The charge of disturbing the peace places him in excellent company.
Posted by John Suarez at 1:11 AM