Where is the Panchen Lama? Chinese agents kidnapped a 6-year old child.

Where is Gedhun Choekyi Nyima? 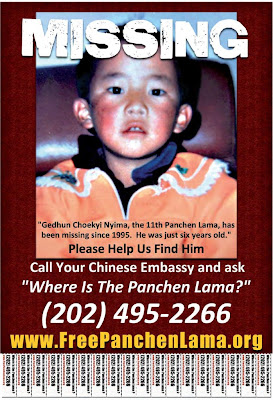 Agents of the People's Republic of China kidnapped a small child named Gedhun Choekyi Nyima. He was 6 years old in 1995 when he was recognized by His Holiness the Dalai Lama as the 11th reincarnation of the Panchen Lama, one of Tibet's most important religious leaders. Gedhun Choekyi Nyima was born on April 25, 1989 in central Tibet. As soon as he was recognized as the 11th Panchen Lama, Chinese authorities took him and his family into custody. A few other people, among them Chartral Rinpoche, the head of the search party were arrested and sentenced for leaking this information to the Dalai Lama.

For the past seventeen years, concerned people and human rights entities the world over have urged the government of the Peoples Republic of China to release the Panchen Lama to no avail. The whereabouts and well being of the Panchen Lama, Gedhun Choekyi Nyima is a serious concern and the regime in China should release him immediately.

Today is his 23rd birthday. His 17th birthday under detention with his whereabouts unknown.

Please speak out on his behalf and take action demanding his freedom.

Free the Panchen Lama!
Posted by John Suarez at 10:33 PM