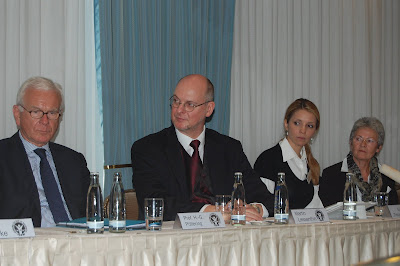 "At the press conference: Prof. Hans-Gert Pöttering, Martin Lessenthin, Eugenia Timoschenko and Wanda Wannsiedler from ISHR (who translated for Ms. Timoschenko)."
Around 300 people took part in the meeting and lots of well-respected politicians and speakers were there. Among them the former President of the European Parliament, who is still a member of the EP and the head of the Konrad-Adenauer-Foundation Prof. Hans-Gert Pöttering. He said that ISHR strengthens the hope of people and denounces deficits in the world. He gave a long speech in which he underlined that it is a big achievement of the 21st century that justice controls power and not power controls justice. Without justice there is no freedom. Moreover he declared that European states learned from "the dark parts of their history" and that they are lobbying in the European Union for the realization of human rights. He added that we should protect human rights around the world without making any difference concerning religious or political beliefs. He strongly demanded that Christians should be able to practice their religion in freedom like it is possible for Muslims to do so in Germany. This is only an excerpt of his long and impressive speech. Prof. Pöttering has been supporting the work of ISHR for years and is also the sponsor of two political prisoners.

Several witnesses and human rights activists from different countries of the world (i.e. North Korea, China, Iran and Cuba) gave speeches and informed the participants about their work and their experiences. One of them was Eugenia Timoschenko, the daughter of the former prime minister of the Ukraine who is now in jail. In a very moving speech and in the press conference she said that the phenomenon of political prisoners is back in the Ukraine and people don´t trust the judicial system. Politicians of the opposition are suppressed and political prisoners like her mother are in a critical health condition. Her mother is isolated, doesn´t get any medical treatment, despite the fact that she can´t walk anymore. 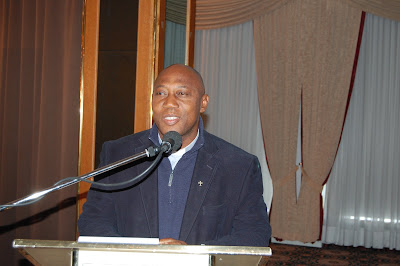 Prelate Prof. Dr. Obiora Ike talked about the situation in Africa.
Prelate Prof. Dr. Obiora Ike from Nigeria is a member of the ISHR and the head of a Catholic institute for development, freedom and charity. He talked about the situation in Africa. He asked: "How can a country be called poor, when it has human beings?" He explained that 75% of Africans are under the age of 30 so that there is so much potential. Moreover Africa has lots of natural ressources. People should ask: "What is more important: Human rights or economic interests?" He underlined that Africa is a rich country and that poverty is made by humans. Some are suffering for the lives of others and this shouldn´t be the future. 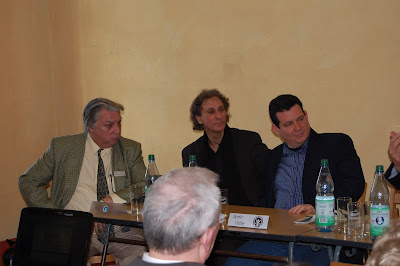 Ricardo Alfonso (on the left side of the picture) was a journalist and political prisoner in Cuba.
There were many interesting facts, speeches and field reports of ISHR members, former political prisoners and human rights activists. One was from Ricardo Alfonso who spoke in the workshop on "freedom of opinion". The journalist gave us an upsetting, moving and very informative insight of his time as a political prisoner. He was arrested during the Black Spring in 2003, sentenced to 20 years and released in 2010. "I love the truth and it is the worst thing you can do in a country without freedom", he said. He wrote poetry in jail which could be smuggled out and was published in France, Spain and the United States. His attitude was admirable: "We are not heroes, but we are free. I have always been in a good mood, told jokes so that I kept doing that while in prison." Since last year he lives in Spain, but hasn't found work there and won't get any help from the Spanish government soon. "As long as Cuba isn't free, I'm not really free, too", he underlined. 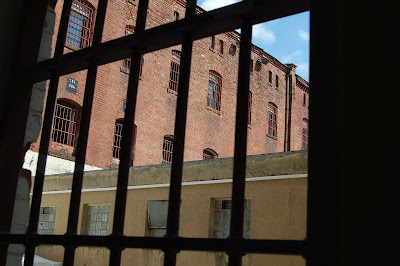 View out of the window of the former prison of the GDR where parts of the assembly took place.