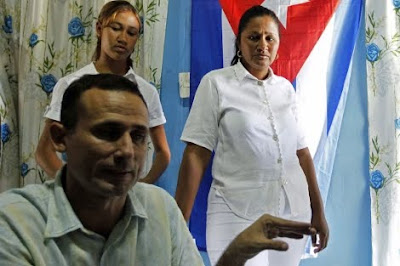 José Daniel Ferrer García pictured above with his wife Belkis Cantillo Ramírez and his daughter
Cuban government critic José Daniel Ferrer García has been detained without charge for more than 10 days. Amnesty International considers him to be a prisoner of conscience, detained solely for peacefully exercising his right to freedom of expression. 42 others arrested at the same time have now been released.

José Daniel Ferrer García, the coordinator of the Patriotic Union of Cuba (Union Patriótica de Cuba, UNPACU) has been detained without charge since 2 April when he was arrested by security forces along with 42 others as part of a crackdown on government critics in the province of Santiago de Cuba. The others detained – who included his wife Belkis Cantillo Ramírez, a member of the protest group Ladies in White – were all released without a charge a few days after their arrest.

José Daniel Ferrer García is being held at the provincial headquarters of the Department of State Security (Departamento de Seguridad del Estado) in the neighbourhood of Versalles, on the outskirts of the city of Santiago de Cuba. He has yet to be charged and has not had access to a lawyer.

José Daniel Ferrer García was previously declared a prisoner of conscience by Amnesty International, along with 74 others who were imprisoned in 2003 solely for their the peaceful expression of their opinions. He was granted conditional release in March 2011, having served eight of his 25 year sentence. Under the terms of his release, he could be sent back to prison to serve out the remainder of his sentence. Amnesty International believes his arrest is an attempt to repress the peaceful dissident activities he and members of UNPACU are undertaking in eastern Cuba and the organization is once again adopting him as a prisoner of conscience.

Please check with your section office if sending appeals after the above date. This is the first update of UA 99/12. Further information:
http://www.amnesty.org/en/library/info/AMR25/012/2012
ADDITIONAL INFORMATION
Prisoner of conscience José Daniel Ferrer García was granted conditional release in March 2011 following eight years imprisonment. He was one of 75 people who were arrested and sentenced following a crackdown on Cuban dissidence in March 2003. All 75 were adopted as prisoners of conscience by Amnesty International, as they had acted non-violently and were imprisoned under Cuban legislation which illegitimately criminalizes political dissent. José Daniel Ferrer García was sentenced to 25 years imprisonment in relation to his participation in the Varela Project, which aimed at requesting a national referendum on democratic reforms. Article 31.1.4 of the Cuban Criminal Code states that conditional release allows a prisoner to see out the remainder of their sentence outside prison provided they demonstrate “good behaviour” (“buena conducta”).

José Daniel Ferrer García was recently arrested in Havana, on 21 February 2012 and held incommunicado until his release without charge three days later

The Patriotic Union of Cuba (UNPACU) is an umbrella group of dissident organizations, based primarily in Santiago de Cuba, but also in neighbouring provinces of eastern Cuba. UNPACU seeks democratic change in Cuba via non-violent means.

Since UNPACU’s creation in mid-2011, its members have faced constant harassment and intimidation form the Cuban authorities, including arbitrary detention. One of UNPACU’s members, prisoner of conscience Wilman Villar Mendoza died in January 2012 following a hunger strike in protest at his four-year prison sentence following a summary trial. This repression is part of a general crackdown against dissidents in the eastern provinces of Cuba which has gathered pace since mid-2011 and has intensified since just before the Pope’s visit to Cuba at the end of March 2012.

On 2 April, 100 officials from the Department of State Security and police officers arrived at José Daniel’s house in Palmarito de Cauto, Santiago de Cuba Province. The officers reportedly broke in and arrested him and his wife Belkis, along with four others. 37 other government critics were also arrested at the same time in Palma de Soriano and El Caney, both in Santiago de Cuba
Province.