A Call for Real Freedom in Cuba Now

The document below, Enough of deceptions, FREEDOM NOW, was authored by Oswaldo Payá who is based in Havana, Cuba and is a leader within the Christian Liberation Movement that authored the Varela Project and has had a huge impact both inside and outside of Cuba with the signatures of more than 25,000 Cubans inside of Cuba signing a petition for the restoration of human rights in Cuba.

In this essay he makes reference to
the conference “A Dialogue between Cubans” which is the third part of a series of meetings organized by the Cuban Research Institute based out of Florida International University focused around the document: The Cuban Diaspora during the XXI century.

The first two meetings were held in Miami on October 10, 2011 and in Madrid on March 13, 2012. This third meeting was held in Havana beginning on Thursday, April 18, 2012. Listening to videos from the two first gatherings that places the Cuban problem first and foremost into a question of US/Cuba relations and the belligerence of the exile community towards the Cuban regime and the lack of rights of migrants is placed in second place. It seeks to look at changes made between totalitarian regimes in China and Vietnam and their respective Diasporas. This ignores what in reality is the great obstacle to normalized relations between Cubans on and off the island: a totalitarian dictatorship that represses all Cubans. 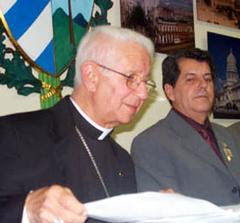 The government of the military regime has denied Cubans the universal right to freedom of travel for more than half a century and continues denying this right without any transparent prospects of change. With the greatest cruelty, it has torn millions of Cuban families apart and it still continues doing it.

Government spokesmen for months have speculated about possible migration changes and some, as Mr. Ricardo Alarcon, President of the National Assembly , justify the prison state in which they maintain Cuba, saying they cannot lose the “human capital”. This expression, characteristic of slavers, reflects the views of those who hold power in Cuba over the human beings, whom they consider their capital, their property and do not treat them as persons with dignity and rights. For the regime the people of Cuba are serfs and not citizens.

If it is true that the Government will make changes to immigration policies, why won’t they inform the people of what changes will take place and when? They despise the people so much that they don’t even respect their right to know. Or is it that the proposed changes are not the rights that we demand in The Heredia Project?

The Heredia Project or Law of National Reunification and for the end of discrimination against Cubans in Cuba, is a citizen proposal based in the Constitution that once and for all, through a legal, clear and transparent manner guarantees:
The regime pursues with its full repressive forces activists who collect signatures for The Heredia Project while talking of possible migration reforms. Some make it easier for them when they make echo of this deception against the people. They accompany the regime in this despotic speculation through statements, publications, conferences and the propagation of doctrines in which they call for a vote of trust for the government of Raul Castro and not the rights, the vote and trust in people.

The conference “A Dialogue between Cubans” that begins today in the Sacerdotal House of Havana, is organized and led by those in Cuba, who not only despise the internal nonviolent opposition, but also deny its existence, explicitly, in their publications; they advance each time more and more in the tunnel of alignment with the lies of the regime and with the proposed continuation of totalitarianism, in which the privileged in power have set their mind to. They are encouraging the oligarchy to continue denying Cubans their rights. In this manner, those who enjoy the privilege of having a voice and protected spaces, conspire against the true reconciliation and peace that can only be achieved if it respects all the rights of all the Cubans, their freedom of expression and association and that free elections are held. We will continue demanding these rights even if we we are alone facing these tactics and conspiracies against popular sovereignty.

These “organizers” speak with the concepts of “the prospects for a relationship between Cuban immigrants and their country of origin, referencing the process of economic reforms or modernizations that have been initiated in Cuba.” We denounce that these are the same terms used by the regime to deny the full condition of Cubans to those who have left our country in search of the freedom that does not exist in Cuba and to those that the regime maintains in the condition of outcasts, as it treats those who currently leave under the category of “definitive exit”. This category of “definitive exit” is employed even in the latest Housing Law, issued only a few months ago. What then is the perspective?

The Christian Liberation Movement in a declaration emitted last March 30th states: The Diaspora is a Diaspora because they are Cuban exiles to which the regime denied rights as it denies them to all Cubans. It is not in that part of oppression, without rights, and transparency that the Diaspora has to be inserted, that would be part of fraudulent change.(1)

Only in the context of a culture of fear and repression with which the regime silences the people are they able to implement the painful maneuver that includes some who take political positions from the Church, others from their intellectual and media show cases, others from their economic interests and others distancing themselves from the Diaspora, so that with their participation contribute to this fraudulent change that is the project that the government clearly expresses in the phrase that says: ”changes for more socialism.”

Although totalitarianism has been sustained for more than fifty years, but it has not subdued the hearts of the Cubans, nor can it fabricate a people to the measure of a regime without freedom, nor a church or a Diaspora in the function of their power. Enough of despotism, of doctrines, of excluding and conditioned conferences, of maneuvers and tactics of distraction to justify and consolidate a fraudulent change that is the change without rights, which leaves the majority of the poor getting poorer and leaves all Cubans without freedom. Cubans in the Diaspora and those of us who live in Cuba, are one people, victims of the same oppressive regime and we have the same hope and the same claim to liberty.

ALL CUBANS, ALL BROTHERS AND NOW FREEDOM.