Human Rights in Cuba: Some new numbers give cause for concern

Things are getting worse

The human rights situation in Cuba remains dire with a regime that is capable of using the appearance of domestic violence to cover up an extrajudicial execution. However there are some facts that are more difficult to coverup. For example, Christian Solidarity Worldwide compiled data that is not exhaustive but  reveals the level of freedom of religion violations, a tenfold increase - with 2,300 separate violations recorded in 2015 compared to 220 in 2014.

The number of short term arbitrary detentions has exploded to levels not seen in decades with monthly detentions increasing from an average of 718 in 2015 to 1,337 on average in the first four months of 2016.

Among the newest prisoners of conscience are Xiomara de las Mercedes Cruz Miranda, Yunet Cairo Reigada and Jaqueline Heredia Morales, who were arrested on 15 April for staging a pro-human rights demonstration in Havana’s Central Park. They were held at a police station jail without charges for a while before being transferred to a long-term prison, while still in limbo concerning specific charges. According to Arcelio Molina, a member of the dissident organization UNPACU, Jacqueline Heredia (pictured below) has been transferred to San José prison, where all AIDS-infected Cubans are taken, and Xiomara de las Mercedes Cruz Miranda and Yunet Cairo have been taken to the women’s prison at Guatao. A fourth dissident arrested the same day at Havana’s Central Park, Marieta Martínez Aguilera, remains jailed at the Departamento Técnico de Investigaciones jail known as “la Quinta.”

Meanwhile the policy of engagement with the Cuban government potentially will have the unintended consequences of turning Major League Baseball into an accomplice in worker exploitation by the Castro family. The Cuban regime has announced that workers will be able to work on cruise ships. Salaries will be paid to the Castro regime and a small pittance turned over to the Cuban workers. 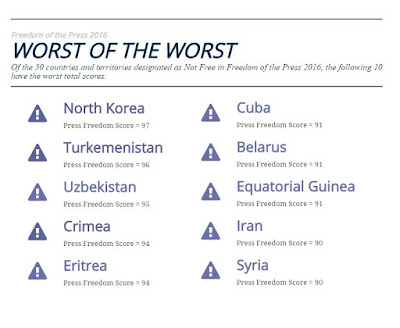 According to Freedom House out of the 50 countries designated not free in Freedom of the Press in 2016 out of the ten worse of the worse Cuba came in sixth place on the planet.

These data should give policymakers cause for concern as the human rights situation in Cuba continues to deteriorate.