Orlando Zapata Tamayo was born on May 15, 1967 in Santiago de Cuba and died following a prolonged hunger strike on February 23, 2010 in Havana, Cuba under suspicious circumstances.  Amnesty International had recognized the pro-democracy activist and human rights defender as a prisoner of conscience.

A bricklayer and carpenter with a heightened sense of dignity he became a human rights defender. He gathered signatures for Project Varela, a citizen initiative to reform the Cuban system and bring it into line with international human rights standards. Orlando was arrested with Dr. Oscar Elias Biscet and other activists in December of 2002 for gathering to discuss how to empower Cubans with knowledge about the Universal Declaration of Human Rights and nonviolent resistance. Released in March of 2003, he would be rearrested for engaging in a fast demanding the release of Dr. Biscet and his other imprisoned colleagues that same month.

Orlando Zapata would spend the last seven years of his life in Cuban prisons suffering beatings tortures, and constant assaults on his human dignity. Orlando Zapata was defiant until the end demanding his right to be treated like a human being.

This was the first high profile opposition death following the start of the Obama administration's outreach to the Castro regime. Prior to that in December of 2009 an American citizen was taken hostage and the U.S. government was uncharacteristically silent.

On March 8, 2010 at the  2nd Geneva Summit for Human Rights, Tolerance and Democracy the plight of Orlando Zapata Tamayo was placed into the Cuban context:


On International Human Rights Day [2009] government organized mobs assaulted the Ladies in White as they marched for the release of Cuba's prisoners of conscience. At least 24 Cuban patients died of exposure at Mazorra, a government hospital in January [2010] of this year and when Amnesty International prisoner of conscience Orlando Zapata Tamayo initiated a water only hunger strike to demand that prisoners be treated decently in December of 2009 prison officials responded by taking away his water for more than two weeks when he was already extremely weak trying to break his spirit and failed but contributed to his death on February 23rd.

Following the international outcry Orlando's death generated, agents of the Castro regime engaged in a campaign of slander against the dead human rights defender in a crude attempt to deny his record of activism.

Proof of this can be found as far away as Canada, where  a punk rock band composed and played a song titled Orlando Zapata that protested the death of the human rights activist. 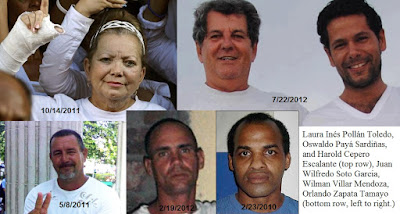 This has coincided with escalating levels of violence against nonviolent activists. At the 2011 VI Communist Party Congress Raul Castro issued a call to violence:

"It is necessary to make clear that we will never deny our people the right to defend their Revolution. The defense of the independence, of the conquests of Socialism and of our streets and plazas will still be the first duty of every Cuban patriot."

Despite these trends the United States has pursued a policy of engagement with the Castro regime that has coincided with a deteriorating human rights situation in Cuba. However today the question to be asked is where were you the day Orlando Zapata Tamayo died?