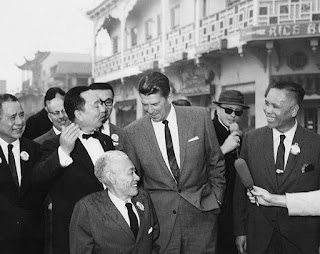 Yesterday commented on the upcoming loss of the Cuban-American vote by the Republican Party if Donald Trump continues backing the Obama administration's Cuba policy of normalizing relations with the Castro regime. This includes not only dismantling the Cuban embargo but the Cuban Adjustment Act as well. This will not be the first time that an ethnic minority, successful in the private sector, and united by a visceral anti-communism due to having to flee their homeland will leave the Republican Party and go solidly Democrat.

In the late 1980s and early 1990s spending time with Chinese Americans I sensed their feeling of betrayal in 1989 when the Bush administration failed to back up the Tiananmen Square protesters because of economic interests. The bipartisan consensus on China has been a disaster for human rights in China. It also ended a clear contrast in policy that led to a favorable outcome for Democrats.

Vietnamese exiles would feel a similar sting of betrayal when Republicans defected to the Clinton side in 1995 and backed the normalization of relations with communist Vietnam.

The American Conservative, with its anti-sanctions agenda, can't see that the GOP's Asian American fiasco is due to the abandonment of the anti-communist cause.  Although they basically laid out the argument as follows:


Moreover, that many Asian-Americans trace their roots to countries that have been and still are under the control of Communist regimes that had repressed their families should have been another reason for many of them to vote for the party of Ronald Reagan and the other Republican Presidents with impressive anti-Communist credentials. And, indeed, during the post-1945 era the majority of Asian-Americans voters that included refugees from Communist-ruled China, Korea and Vietnam tended to identify with the conservative and anti-communist agenda of the Republican Party.

It is true when analysts claim that anti-communism is no longer an issue to galvanize Asian voters but this is not because communism is no longer a looming menace, but because the Republican Party abandoned them assuming the same weak position as the Democratic Party on the issue. Now when the slave labor and poor working conditions in these communist regimes take good paying jobs from Americans, instead of framing it within an anti-communist freedom agenda the rhetoric is anti-immigrant and Asia bashing further hurting electoral prospects.

The anti-communist factor is purposefully left out these analysis because it goes against corporate interests. When the Republican Party abandons anti-communism in favor of Rockefeller internationalism it hurts the GOP with anti-communist ethnic groups. Hawaii had a Republican Senator of Chinese descent, Hiram Fong, in office from 1959 to 1977. Even today the issue of how a candidate addresses the issue of the struggle for freedom in China has an impact. Twenty eight Chinese pro-democracy groups issued a public statement which in part stated:


"We are appalled by Donald Trump’s remarks about the Chinese government’s 1989 massacre during the 12th Republican presidential candidate debate last Thursday, in which he called the heroic pro-democracy protest in Beijing a “riot”, and praised the Chinese government’s response as “strong.” Trump’s comments show not only a lack of moral orientation, but also show a complete disregard for the hundreds if not thousands of innocent lives lost when the Chinese government butchered unarmed students and citizens in Tiananmen Square on June 3-4, 1989."

In the Cuban case "pollsters" claimed that supporting the Cuban embargo was no longer helpful to candidates in obtaining the Cuban vote. Charlie Crist believed the pollsters and flip flopped on the embargo issue and announced that he wanted to go to Cuba as he ran for governor of Florida. By June of 2014 it was obvious that the flip flop was effecting him negatively and he changed his mind on going to Cuba. The American Spectator reported the outcome:


Crist erred early on when he said he wanted to visit Cuba during the campaign. This drew the predictable outrage from Florida’s Cuban Americans. Crist quickly ditched the idea after the blowback. But he did poorly among Cuban-Americans Tuesday, while doing better with other Hispanics.

In a tight election with an unpopular Republican governor this was a factor that cost Charlie Crist the governor's mansion.  Mr. Trump should listen to Governor Rick Scott because the Cuba embargo issue was one of the reasons he got re-elected.

By removing Cuba as an issue in the 2016 election with both Clinton and Trump backing Obama's policy one will find Cubans streaming to the Democratic Party.  No doubt the usual suspects will try to spin it as inevitable and due to Trump's xenophobia, but it will have more to do with abandoning an anti-communist policy towards the Castro regime. Senator Jesse Helms visited Little Havana in Miami, Florida on April 17, 1995 where he was wildly cheered by Cuban exiles who gave him a hero's welcome for his anti-communist Cuba policy.  In 2011, Senator Marco Rubio expressed his admiration for the late Senator Jesse Helms. This was probably due to the well of positive feelings in the Cuban American community for the later Senator of North Carolina.

Looking at the long term, a question for my Republican friends. The Cuban-American factory worker in Hialeah who is just making ends meet and has been voting Republican since he became a citizen. Do you think its because of lowering the top marginal tax rate or because Republicans have been associated with an anti-communist policy that keeps sanctions on the Castro regime?