There is a fundamental error by analysts that look at the Castro regime solely through the prism of U.S. - Cuba relations defined by economic sanctions without looking at the larger regional and international context.  This is especially the case with regards to human rights and the so-called "principle" of consistency in the light of perceived double standards. It seems that all who argue against double standards inevitably advocate lowering standards to the lowest common denominator never raising them.

Double standards as a code phrase for lowering standards
United States foreign policy in Saudi Arabia and China have, in the name of realpolitik, not been principled on the human rights front and led to outcomes disastrous for the United States. At the same time one must recognize that narrow and powerful interests have benefited financially from these arrangements. The argument advanced by those seeking to repeat the regrettable approach used in Saudi Arabia and China with Cuban foreign policy is one of consistency that results in ending a principled human rights policy in Cuba bringing it into line with other disastrous policies that have not served the just interests of the United States. To suggest that foreign policies in Saudi Arabia and China advance human rights at the expense of narrow economic interests is to be ignored or ridiculed. Meanwhile the President visits Vietnam and opens up weapon sales to the communist dictatorship while claiming to promote human rights there.

The Castro Regime's War on Human Rights
In the larger international context historically providing the Castro regime a free pass in its outlaw behavior has negatively effected not only countries in the Americas and Africa, but also led to more international terrorism and the decline of international human rights standards.

Cuban governments prior to the Castro regime played an important role in advancing human rights regionally and internationally punching above their weight. Sadly the Castro regime has been successful in undermining this positive legacy.

This is not an accident but to be expected for a totalitarian dictatorship that has sought to duplicate its political model around the world and has been successful in Nicaragua, Venezuela, Bolivia and Ecuador.

The decline of regional human rights instruments in the Americas is the result of the expansion of Cuban influence in the region during the Obama administration. Welcoming the Castro regime back into the Organization of American States in 2009 did not have the desired effect.

Human rights across the world have been in decline for the past decade. The policy of normalizing relations with the Castro regime in Cuba has been a contributing factor. 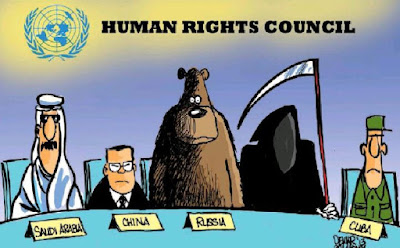 White House in Cuba betrayed human rights everywhere
President Obama's failure on human rights is having serious consequences that will be felt for decades to come. The claim made by the White House that human rights are a priority in its Cuba policy are not backed up by its actions: freeing Cuban spy guilty of murder conspiracy that claimed four lives, snubbing dissidents, watering down reports to place regime in more positive light, visiting the dictatorship and legitimizing it.

Human rights activist Aaron Rhodes, writing in the Huffington Post, describes the failure in harsher terms focusing on the President's speech, which was foolishly praised by some in the Cuban American community at the time:

Obama missed an opportunity to explain and defend that idea of human rights, which animated America’s founders, and which they bequeathed to Americans and to people all over the world in the Bill of Rights to the U.S. Constitution. Instead, Obama “personally” embraced an interpretation of human rights at variance with the philosophy of the U.S. Constitution. What is more, Cuba has arguably done more than any other nation to subvert respect for authentic human rights in the United Nations. With his response, Obama indirectly but clearly endorsed that program. If his words indeed reflect the U.S. approach to human rights, it is bad news for those who defend human rights as natural rights to basic freedoms, and who look to America for support and as an example of the success of freedom.
Cuba has consistently defended the world’s worst human rights abusers, like North Korea, from criticism in international forums, claiming that such criticism is “political” and “biased.” In fact, Cuba is the most vocal member of the United Nations seeking to blunt the UN’s already blunt instruments for investigating grave human rights violations and putting pressure on governments to reform, favoring anodyne, “thematic” issues instead. Cuba has been a leader in proposing bogus human rights mandates in the UN Human Rights Council, like the “Independent Expert” on the “Promotion of a Democratic and Equitable International Order,” which is nothing but a platform for ideological attacks on free societies and free enterprise — in the name of “human rights.”
Thanks in large part to Cuba, the international human rights system has become hopelessly clogged up with such institutions.

Just after the President's visit to Cuba I gave an analysis of the speech and found it a disappointment and that former President Carter in 2002 had made a more compelling case for human rights in Cuba. Rhodes in his essay describes the depth of Obama's betrayal of human rights


Obama’s betrayal of the idea of natural rights was also a betrayal of Cuban human rights campaigners, and indeed people around the world living under dictators who exploit the conflation of human rights and welfare rights in order to defend oppression.

Rhodes left out an even more problematic part of President Obama's speech to the Cuban people. The President equated the ideals of the American rebellion that ended British rule and established the United States with the ideals of the Castro revolution that lied itself into power, claiming to be democratic, only to install a communist tyranny that 57 years later remains in power through terror and repression. Despite President Obama's claim, they are profoundly different and to equate the two not only confusing but offensive.

This trend did not begin on the Obama Administration's watch but has reached a new low that bodes ill for the future. 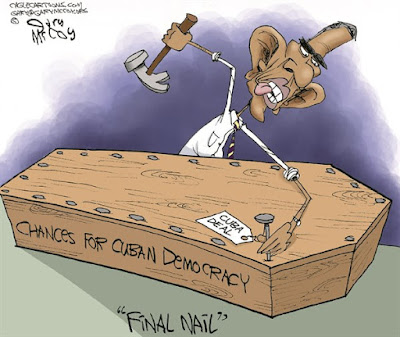