Human rights and democracy have been in retreat worldwide for the past decade. Between 2006 and 2016 there has been a steady decline in global liberty and human rights. The Associated Press reported that the Obama administration "is blaming a global crisis in governance as well as atrocities committed by non-state actors for a decline in human rights standards around the world." 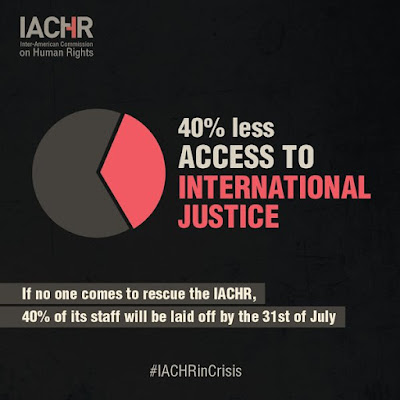 
Washington, D.C. - The Inter-American Commission on Human Rights (IACHR) is going through a severe financial crisis that will have serious consequences on its ability to fulfill its mandate and carry out its basic functions. The Commission deeply regrets having to report that on July 31, 2016, the contracts of 40 percent of its personnel will expire, and at this time the Commission does not have the funds—or the expectation of receiving the funds—to be able to renew them. The Commission is also very sorry to report that it has been forced to suspend the visits it had planned for this year, as well as its 159th and 160th sessions, which had been scheduled for July and October.

The IACHR is alarmed by the fact that this situation will result in the dismantling of areas essential to its mandate. The IACHR is also distressed for the victims, petitioners, and civil society organizations that had planned to participate in hearings, working meetings, and other forums scheduled for the October session. The IACHR also expresses its deep concern because the suspension of sessions has a direct impact on the Commission’s capacity to make progress in processing complaints of human rights violations, since it is during these sessions that the Commissioners analyze, debate, and approve reports on petitions and cases. 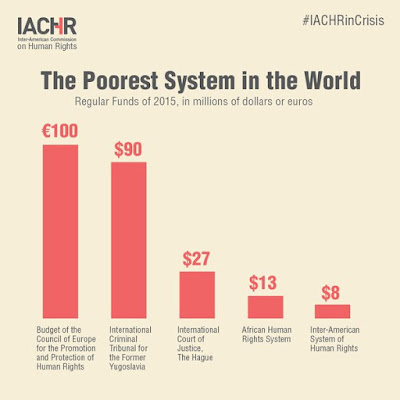 Moreover, it is disturbing that thousands of victims of human rights violations will be left unprotected. The total dismantling of some work teams and the cutbacks mean that it is inevitable that the procedural backlog the Commission had been trying to reduce will increase again and will reach a point where it is incompatible with the right of access to justice. The IACHR also deeply regrets having to face an imminent situation in which it could lose valuable employees who have worked tirelessly for the rights of victims and have brought a sense of duty and devotion to the cause of human rights.

In the last few months and weeks, the IACHR and its Executive Secretariat have tried its best to confirm donations that had been previously talked, but unfortunately these did not succeed. The IACHR will continue to make every effort within its power to turn this situation around immediately, to prevent the loss of 40 percent of its staff and to be able to reschedule its sessions, visits, and all the other activities planned for 2016. To this end, the Inter-American Commission calls on the member countries, observer countries, and other potential donors to make urgent financial contributions that can be immediately available.

To avert this dire situation, the IACHR would need to receive funds, or at least commitments in writing for donations, before June 15. 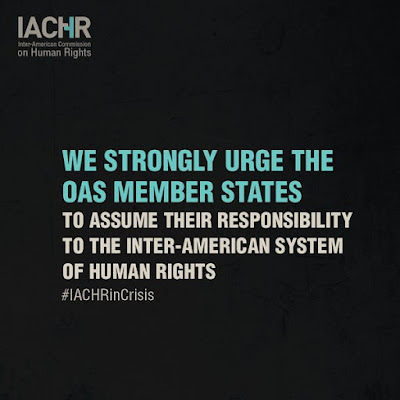 Beyond the immediate financial crisis, the Inter-American Commission suffers from a structural, systematic lack of funds that must be addressed and resolved. There is a deep discrepancy between the mandate the Member States of the Organization of American States (OAS) have given the IACHR and the financial resources they allocate to it. The regular budget of the IACHR this year is less than 5 million dollars, which amounts to $0.005 per person in the hemisphere per year. The staff of the Commission financed by the OAS regular fund consists of 31 people; in other words, it has fewer employees than countries under its jurisdiction. The other 47 employees are financed with donations, which can be unstable and unpredictable, as the current crisis shows.

In the last two decades, the Commission has made ongoing efforts with the OAS Member States to secure a budget that would enable it to work effectively to fulfill its mandate. As a result of these efforts, the OAS General Assembly has approved a number of resolutions expressing a commitment to address the situation; however, these have not been reflected in a significant increase in resources. While the Council of Europe earmarks 41.5 percent of its budget to the promotion and protection of human rights, the OAS earmarks 6 percent of its budget to the Inter-American Commission of Human Rights. 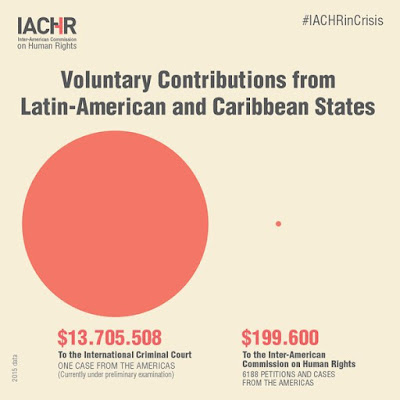 In this regard, the Inter-American Commission on Human Rights strongly urges the OAS Member States to take on their responsibility to the inter-American Human Rights System. The IACHR hopes that the next OAS General Assembly, which will be held in June, will adopt a historic and far-reaching decision, one that reflects the States’ commitment to the defense of human rights in the region. This means radically increasing the budget of the OAS regular fund and allocating to the IACHR and the Inter-American Human Rights System in general the resources needed to fulfill the mandate the States themselves have handed down. It is essential, imperative, and urgent for the States to adopt a sustainable solution to this serious, chronic problem and demonstrate their commitment to the respect and guarantee of human rights with deeds and not just words.

The IACHR expresses its firm commitment to continue to work in the fulfillment of its functions, inspired by the words of the American Convention on Human Rights, which states that “the ideal of free men enjoying freedom from fear and want can be achieved only if conditions are created whereby everyone may enjoy his economic, social, and cultural rights, as well as his civil and political rights.” 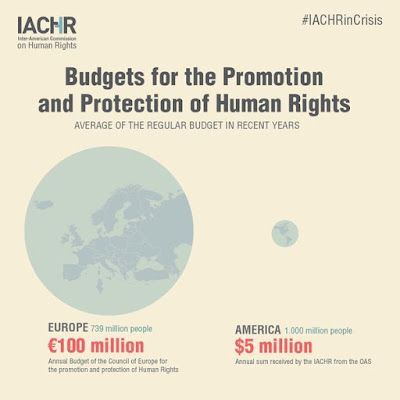