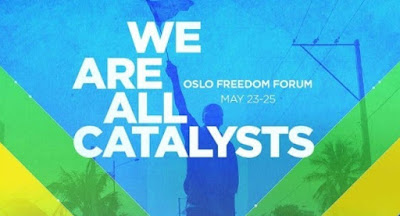 "A single spark can start a raging fire, which is why this year, the Oslo Freedom Forum is dedicated to catalysts: women and men who have realized that while individuals can’t change the world on their own, the world can’t change without individuals. That even if you are the first person to stand up, you won’t find yourself standing alone for long."

The event will be broadcast live over Livestream.

Two Cuban speakers will be addressing the Oslo Freedom Forum this year:

Rosa María Payá, daughter of the deceased democracy activist Oswaldo Payá, is one of Cuba’s most vocal political dissidents. Payá serves as the president of the Latin American Network of Youth for Democracy, and is a member of the Cuba Decides campaign. In April 2014, Payá was detained in Panama before the Summit of the Americas in what has been criticized as a move of political intimidation. Since her father’s passing in a mysterious car accident in 2012, Payá has repeatedly called for a formal investigation into his death, speaking around the world on his behalf and addressing a public letter to President Obama following the change in U.S. policy toward Cuba in 2014.

Danilo “El Sexto” Maldonado is a Cuban graffiti artist and activist whose public work has subjected him to ongoing repression and imprisonment at the hands of the Castro dictatorship. A target of the Cuban government, he has been detained numerous times for his protest art. In December 2014, El Sexto was arrested on his way to put on a performance art piece called "Rebelión en la Granja," with two pigs decorated with the names “Fidel” and “Raúl.” El Sexto was charged with contempt and imprisoned for 10 months without a trial. He was finally released on October 20, 2015, following pressure from international human rights groups.

Oslo Freedom Forum 2016 events are underway and can be followed over twitter.
Posted by John Suarez at 10:58 AM