Document - Cuba: Women protesters must not be silenced 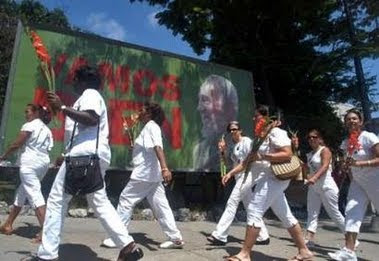 WOMEN PROTESTERS MUST NOT BE SILENCED

F emale relat ives of former prisoners of conscience , and their supporters , have been prevented since mid-July from carrying out a weekly peaceful protest calling for an end to political imprisonment . They are likely to face similar repression on 28 August.

The Ladies in White (Damas de Blanco), a group of female relatives of former prisoners of conscience and current political prisoners, and the Ladies in Support (Damas de Apoyo), have for the last month faced arbitrary arrest and physical assault from members of the security forces and government supporters in the south-eastern city of Santiago de Cuba and surrounding towns. They have tried to march in silent protest every Sunday to call for the release of prisoners they believe have been jailed for their dissident activities, before going to mass.

On 21 August, 11 Damas gathered at the home of Aimée Garcés Leyva in the town of Palma Soriano. Some 100 people, including police and government supporters, surrounded the house for several hours. When the women tried to leave, police pushed them and pulled their hair before forcing them into buses. They were driven a few kilometres, then taken in police cars and dropped near their hometowns in the provinces of Santiago de Cuba and Holguín. At the same time the house of Tania Montoya Vázquez, in Palma Soriano, was surrounded by police for several hours, preventing her and two fellow protesters from leaving. Five other Damas who live in the city of Santiago were arrested before they reached the cathedral and held in police stations for several hours.

On 7 August, 21 Damas attended mass in the Cathedral of Santiago de Cuba. As they left they were surrounded by dozens of government supporters and police officers, and said they were physically and verbally attacked. Police forced them onto a bus, took them back to their own provinces and released them several kilometres from their homes. They were also prevented from carrying out their peaceful protests on 17 and 24 July, when they tried to attend mass in El Cobre and Palma de Soriano respectively, both in the province in Santiago de Cuba. On 28 August, they plan once again to carry out a silent march and attend mass at the Cathedral of Santiago de Cuba.

calling on the authorities to permit the Damas de Blanco and Damas de Apoyo to march peacefully on Sundays and attend religious services without unreasonable restrictions;

asking them to cease immediately the harassment and intimidation of the Damas de Blanco, Damas de Apoyo and any other citizens who seek to exercise peacefully their rights to freedom of expression and association.

WOMEN PROTESTERS MUST NOT BE SILENCED

In 2003, over several days, the Cuban authorities arrested 75 men and women for their peaceful expression of critical opinions of the government. They were subjected to summary trials and were sentenced to prison terms of up to 28 years. Amnesty International declared the 75 convicted dissidents to be prisoners of conscience, and the last of them was released in April 2011.

The Damas de Blanco organize peaceful marches where they distribute flowers and call for the release of their relatives and friends. In 2005, the Damas de Blanco were awarded The Sakharov Prize for Freedom of Thought by the European Parliament.

The Damas de Apoyo emerged as a solidarity group who support and participate in activities organized by the Damas de Blanco.

There are now 35 Damas de Blanco and Apoyo from the eastern provinces of Santiago de Cuba, Holguín, Las Tunas, Granma and Guantánamo.

The Damas de Blanco and Damas de Apoyo have repeatedly suffered harassment and intimidation during their peaceful activities. In central Havana on 18 August 2011, 49 Damas were prevented from carrying out a protest in support of their members in Santiago de Cuba and other eastern provinces. Government supporters physically forced them to return to their homes. On 14 August only three of 22 Damas who travelled to Santiago de Cuba managed to enter the Cathedral for mass. Five of them were arrested before mass began, and taken to various police stations in the city and held for several hours. The 14 other Damas were stopped at a police checkpoint 11 km outside the city and forced off the bus they were travelling in by women police officers. Nine of them, including Belkis Cantillo Ramírez, the wife of former prisoner of conscience José Daniel Ferrer García, were kicked and slapped as they were pushed into police cars and returned to their homes.