The human rights situation in Belarus in 2011 has dramatically deteriorated in the aftermath of the so-called December 2010 "elections" in which opposition candidates were brutally beaten up, arrested and the election stolen. So far over the course of 2011 over two thousand people have been arrested for engaging in silent protests in Belarus according to the Viasna Human Rights Center. Now the regime in Belarus has drafted a "law" to ban silent protests. In the midst of all this madness human rights defender Ales Bialatski was arrested on August 4, 2011 both the World Movement Against Torture and Amnesty International have taken up his case calling on people of good will to take action. Reproduced below is Amnesty International's urgent action which is active until September 16, 2011. 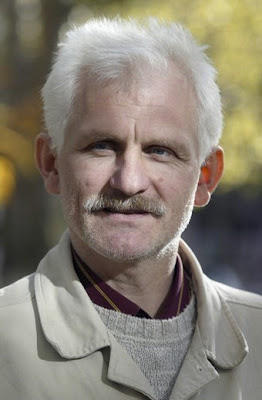 Prominent Belarusian human rights defender Ales Bialatski was arrested in central Minsk , Belarus, on 4 August . Amnesty International is concerned he is being targeted for his legitimate work .

Ales Bialatski, Chairperson of Human Rights Centre Viasna and Vice-President of the International Federation for Human Rights was detained on 4 August at approximately 16.45 near Victory Square in central Minsk and was held overnight at the Department of Financial Investigations. At 14:00 the same day, the offices of Viasna were surrounded by men in plain clothes. When staff at Viasna left the building they allegedly overheard one of the men on the phone saying that Ales Bialatski was not there.

Ales Bialatski was detained by men in plain clothes claiming to be police representatives of the Department of Financial Investigations. Following his detention, Ales Bialatski was reportedly taken to his apartment, which was searched. He was then taken to the Viasna office which was also searched from 19:55 to 20:50. Documents and office equipment were confiscated from the office, as well as a computer from his apartment. His wife and child, who were also in the apartment, were taken to their summer home outside of Minsk, which was also searched.

Amnesty International believes that Ales Bialatski’s detention is part of a pattern of the ongoing and longstanding harassment of civil society activists and human rights defenders by the Belarusian authorities. Given the unprecedented crackdown on civil society following the Presidential elections in December 2010, Amnesty International believes his detention is politically motivated and intended to obstruct his legitimate work as a human rights defender. Human Rights Centre Viasna has been providing assistance to individuals and families affected by the crackdown.

Ales Bialatski could be held for up to 10 days, during which time he will be investigated under Article 243.2 of the Belarusian Criminal Code (“concealment of profits on an especially large scale”). This carries a sentence of up to seven years’ imprisonment with confiscation of property. If charged, he will be taken to a detention centre.

Please write immediately in Belarusian, Russian or your own language:

Call on the Belarusian authorities to ensure that Ales Bialatski has full access to all legal safeguards in detention, in accordance with Belarus’ obligations under international human rights law, including access to a lawyer of his choice;

Call on the Belarusian authorities to ensure that any investigations are conducted promptly and impartially;

Urge the Belarusian authorities to stop the harassment and intimidation of civil society and remind them of their responsibility to protect human rights defenders, as set out in the UN Declaration on Human Rights Defenders.

Human Rights Centre Viasna has been active in Belarus since 1998 and registered as a non-governmental organization in 1999. In 2003 its official status was withdrawn following its work on election monitoring and the authorities have repeatedly obstructed the organization’s official registration. Following the Presidential elections in December 2010, the organization and its staff have come under increasing pressure from the authorities, within a context of widespread harassment of civil society throughout the country.