The solidarity of the shaken: China, Cuba and Mao Hengfeng 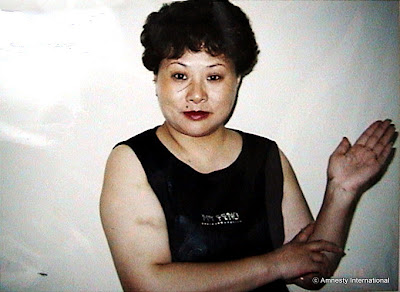 Over the past four Sundays Cuban women have been brutally beaten by agents of the communist regime. Some have had bones broken. The practice is not unique to Cuba. Communists in China like their counterparts in Havana beat down women who peacefully disagree with them and detain them for further mistreatment. As human rights defenders outraged at what is taking place in Cuba we should also raise our voices in solidarity for women in China defending human rights who are also suffering brutal treatment. Please take action for Mao Hengfeng who was beaten, detained, tortured and returned home unconscious in a wheel chair.

Human Rights Watch has a brief description of Hengfeng's background as an activist on a page profiling prominent human rights defenders in China:

Mao Hengfeng is a Shanghai activist who has been active in defending housing rights, opposing forced evictions, and promoting women’s reproductive rights for the past two decades. She was first arrested in 1988 when she was fired from her factory job for refusing to terminate her second pregnancy. She lost her court battle against the factory and was forced to terminate her third pregnancy. She subsequently petitioned to state authorities over her coerced abortion, as well as labor rights and housing rights. In April 2004, Shanghai police sentenced her to eighteen months in reeducation through labor. She was reportedly subjected to torture and ill-treatment there, prior to her release on September 12, 2005 after completion of her term. However, she defied orders to stop protesting about violations of her rights, leading security forces to harass and beat both her and her husband, Wu Xuewei. On January 24, 2006, she was arrested and detained yet again. While under police custody in a hotel room, Mao broke two lamps. She was sentenced to two and a half years in prison for “vandalizing public property.” Mao has reportedly been beaten and sexually harassed during her latest incarceration.

Amnesty International on their blog Human Rights Now describes the latest outrage committed against this activist, that sounds all too familiar to activists working on Cuba:

Mao’s most recent arrest was a result of her protest in front of the Beijing municipal intermediate court expressing support for human rights activist and Nobel Laureate Liu Xiaobo. On March 4, 2010, Mao was sentenced to 18 months in Re-education Through Labor.

While in detention, Mao suffered torture and abuse at the hands of the guards, the police, and even other inmates who were instructed to beat her. Her health deteriorated so dramatically that she was released on medical parole on February 22, 2011, but detained again a mere two days later.

While Mao Hengfeng was in transit to Shanghai City Prison Hospital on February 24, she was continuously beaten in the police car until she lost consciousness. During her time in the prison hospital, she was not allowed to communicate with her family, shower or bathe. If she moved without permission, she was beaten.

On July 28, 2011, the prison hospital released Mao Hengfeng while she was unconscious in a wheelchair. Her family had not received any advance notice about her release. In previous cases, Shanghai detainees have been returned to their homes shortly before dying so that the police and authorities can “wash their hands” of culpability for the deaths of the detainees.

Bearing this in mind, Mao’s husband Wu Xuewei requested that the Shanghai authorities send her to a nearby motel. When her family then attempted to transfer her to a public hospital, ten police officers guarding the motel prohibited her from leaving.

By July 31, Mao’s condition had ameliorated slightly, and she asked her husband to take her to church. When the police officers discovered her absence, they followed her to the church and aggressively attempted to beat her. Although members of the congregation intervened, the police warned Mao she could be detained again and that next time, she could die in detention.

In the past seven years, Mao has been tortured so often and with such severity that at one point she partially lost feeling on the left half of her body, and while at another time she lost sight and hearing for 24 hours. Shortly before the two-day medical parole in February, a doctor found signs of bleeding in her brain from a CT scan. On the day before authorities decided to end Mao Hengfeng’s detention, she kept slipping in and out of consciousness, unable to eat or drink water. 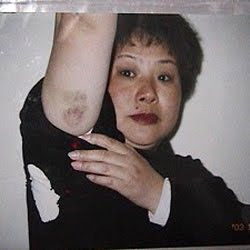 Mao Hengfeng shows bruises from previous beatings while in custody.

Amnesty International has organized a campaign calling on an investigation into the torture of Mao Hengfeng in China. In Czechoslovakia, then dissident Vaclav Havel, wrote important essays on the power of the powerless and living in truth where the word solidarity arose within the context of anti-political politics:

When Jan Patocka wrote about Charter 77, he used the term 'solidarity of the shaken'. He was thinking of those who dared resist impersonal power and to confront it with the only thing at their disposal, their own humanity. Does not the perspective of a better future depend on something like an international community of the shaken which, ignoring state boundaries, political systems, and power blocs, standing outside the high game of traditional politics, aspiring to no titles and appointments, will seek to make a real political force out of a phenomenon so ridiculed by the technicians of power—the phenomenon of human conscience?

Let us who know how these kind of regime's operate demonstrate our support for this woman and other Chinese human rights defenders and in doing so join with action the international community of the shaken and break down the walls of isolation that these regimes depend on to maintain power and control. Listen to her speak out about her plight in 2010 in the video below.