Raul Castro has nothing to fear from [the Ladies in White] but their integrity and moral authority. That, however, they have in abundance... The Boston Globe, August 19, 2011 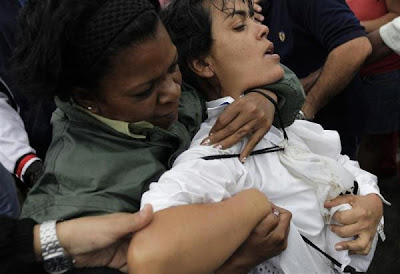 The Coalition of Cuban-American Women gathering information from inside Cuba reported on the August 18, 2011 attack against the Ladies in White in Havana, Cuba:

In the streets of Neptuno and Hospital, at around 4:30 P.M., mobs instigated by the Cuban regime brutally attacked a group of almost fifty pro democracy women dressed in white as they were about to march through the streets of Havana to advocate on behalf of Cuban political prisoners and the freedom of all Cubans.

As the “Ladies in White” set off from the house of Laura Pollan located at Calle Neptuno No. 963 between Aranburen and Hospital, following their monthly “Literary Tea”, they were dragged, beaten, kicked, spit upon, scratched, pushed, and had their hair pulled as well as their clothes ripped off by paramilitary mobs. The violence forced them back inside the home they consider their headquarters.

Also, the following eight women were detained as they were on their way to Pollan’s home to attend the meeting they hold the 18th of every month: Sara Martha Fonseca, Idalmis Ramirez, Odalis Izarza, Cristina Duquezne, Ivon Mayesa, Mercedes Fresneda,Rosario Morales, Yanelis Rey.

Berta Soler , one of the spokeswomen for the Ladies in White, present during the attack spoke to the EFE news service about what had taken place and stated that:

"This is organized by the government, and we hold it responsible for anything that happens to us because we are peaceful women and we will continue to struggle peacefully because nothing is going to stop us from going to church to pray for the release of political prisoners or to take to the streets."

It is for this reason that The Boston Globe Editorial arrives at a critical time and will hopefully in generating attention provide some much needed protection to these courageous women.

WHILE THE Syrian government’s savage attacks on anti-government protesters have rightly drawn the world’s attention, it isn’t only on the other side of the world that dictatorial rulers have been bloodying their critics.

In Cuba in recent weeks, pro-government goons have been attacking members of Ladies in White, a nonviolent protest group made up of women whose husbands, brothers, and fathers are dissidents imprisoned by the Castro regime. In one attack, the Miami Herald reported last week, the women were assaulted with “steel bars, rocks, and fists’’ as they left Mass in the cathedral of Santiago, the island’s second-largest city. At least eight of the women ended up in the hospital, where they required stitches and other treatment for their wounds. According to Elizardo Sanchez, one of Cuba’s leading human-rights activists, the attacks have left dissidents deeply alarmed; they know that no one “would dare order such beatings and so much violence without the approval of the central government.’’

Unlike Syria, Cuba has not seen massive street demonstrations, nor have there been public demands for the overthrow of the government. The Ladies in White, who received the Sakharov Prize for Freedom of Thought from the European Parliament in 2005, are few and vulnerable; Cuban ruler Raul Castro has nothing to fear from them but their integrity and moral authority. That, however, they have in abundance, while the ruthless regime over which Castro and his brother Fidel have presided for more than half a century has long since lost any claim to the respect or admiration of the free world.