"The most important thing is to be free... to express yourself. Although the environment helps to determine the creative process, the evolution my work has undergone was inevitable." -Tony López 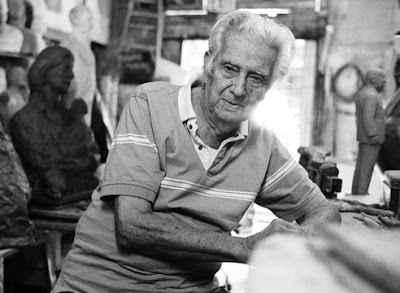 “I believe I was born with a ball of clay in my hand.” - Tony López , Luis J. Botifoll Oral History Project. 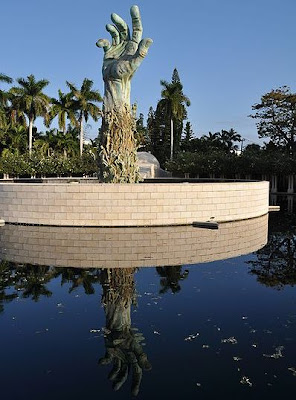 Cuban sculptor Tony López passed away at age 92 on Sunday. Two of the most impacting sculptures that the late artist worked on were the Torch of Friendship in downtown Miami built in 1960 and the Holocaust Memorial on Miami Beach. These sculptures are important cultural and artistic landmarks in South Florida.

On the late sculptor's studio website there is a description of his role in assisting in the creation of the holocaust memorial:

Tony Lopez worked closely with architect and sculptor, Kenneth Treister who has described it as, "a large environmental sculpture". Located in Miami Beach, Florida, the completed monument was erected in 1985 and remains as one of the greatest memorials to the victims of the Holocaust.

The University of Miami Digital collection has a June 13, 2009 interview online with the great Cuban sculptor which is part of the Luis J. Botifoll Oral History Project. The Miami Herald gave a brief overview of his life's work in its Monday, September 29, 2011 edition:

In 1939, López won his first important award, a medal of the Bellas Artes circle with the bust of a union militant. In the next two decades he was known for his “caricature sculptures,” in which he carved images of public and political figures that were later published in the Bohemia magazine.

The most controversial of these was of President Ramón Grau San Martín characterized as a devil.

Persecuted by the government of Fulgencio Batista because of his political views, López came to Miami as an exile in 1958. Here he left his imprint with a statue of Cuban military hero Antonio Maceo and other monuments in Little Havana. He also made the original models of the Holocaust Memorial in Miami Beach and a sculpture of Cuban anti-Castro fighter Jorge Mas Canosa for a park in Miami Beach.

His rooster figures, inspired by his pet rooster Pepe, on Calle Ocho were very popular.

López also leaves behind the sculpture of a small siren at the entrance to Marco Island and a bust of Latin American military hero Simón Bolívar in front of the Miami Beach Library, as well as one of Pope John Paul II in Angola and one of Cuban scientist Carlos J. Finlay at Jefferson Medical College in Philadelphia.

A more complete biography is available at The Tony Lopez Studio website:

"I can't remember which came first to me, crawling or drawing, When I was in school, art was my favorite subject and I excelled in it." Tony Lopez smiled mischievously, "My father couldn't keep me away from his studio. Many times he would tell me to go and play ball with the other kids."

Tony's father was a sculptor, and little Tony learned to shape clay and carve, while others his age were learning the alphabet. By the time he was a teenager, he was quite skilled in what was to be his profession. His father died while working on a commissioned monument, which was finished by the eighteen-year old Tony.

He has sculpted all his life. "There is nothing else I want to do; sculpture is my only means of expression. It is my passion in life."

"I have never followed one school of sculpting or sculpting trend. In politics and philosophy as well, I cannot align myself with one discipline. There is good and bad in everything."

An abstract expressionist, Lopez' works are soft, rounded and sinuous. Wavelike swellings ripple within the works. Strong and tender, almost vibrant with emotion, they reflect the intensity of the artist. "When working the feeling is ecstatic, it is almost indescribable."

Tony López's work has made an impact in South Florida that will be there for generations to come. The Holocaust Memorial is a work that preserves memory for future generations and the Torch of Friendship symbolizes hemispheric solidarity and the space left for Cuba hope for the future. Master sculptor Tony López will be sorely missed but he lives on through his work.