What is the dictatorship in Cuba so afraid of and why is the international media now silent about this story? 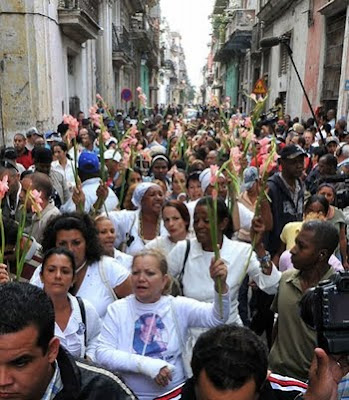 It happened again today in Cuba. A group of women of the Ladies in White attended mass at the Cathedral of Santiago de Cuba and were greeted at the end of Church services when exiting the Cathedral with a mob organized by Cuban state security to insult and physically assault them.

According to former prisoner of conscience Jose Daniel Ferrer Garcia 15 of these women were roughed up then forced onto a bus and taken away. The whereabouts of the women remain unknown.

However, the shameful acts of repression did not end there on Sunday. 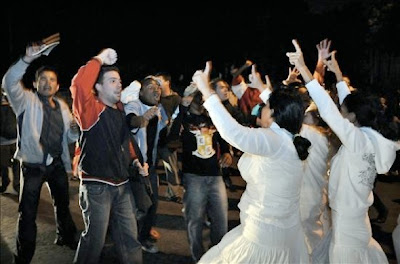 More than 20 opposition activists protested the mistreatment and detention of these women with a sit-in outside of the local branch of the regime's general assembly. They were also subjected to an act of repudiation and attacked by a regime organized mob wielding sticks and throwing rocks at the nonviolent activists.

The home of Jose Daniel Ferrer Garcia was also subjected to attack with three minors attacked at his home. Neighbors who protested the thuggish actions of the mob were also attacked.

The Coalition of Cuban American Women reported that "the home of activist Maximiliano Sanchez was also attacked in the same manner.As a result of the violent acts of repression carried out in the cities of Santiago de Cuba and Palmarito de Cauto by the Cuban Ministry of the Interior, six human rights activists were hospitalized with fractures, contusions, and wounds that had to be sutured. By orders of the political police, doctors refused to provide these wounded activists with a medical certificate, which they need in order to accuse Cuban authorities of the violence perpetrated against them."

Mike Gonzalez in an oped essay titled "Cubans still suffer, but media looks away" offers possible answers as to why the media remains silent as the Castro regime beats up on women and children attending mass and peacefully demanding that their loved ones be freed. They'd just been brutalized the day before on July 17, 2011 . He offers two possibilities: "they’re either so afraid of being expelled, or have so bought into the regime’s propaganda." Journalists in Cuba have ample reason to fear being expelled having seen colleagues such as Chicago Tribune's Gary Marx, the BBC's Stephen Gibbs and Cesar Gonzalez-Calero of Mexico's El Universal all expelled in 2007 from Cuba for offering reporting that although bending over backwards not to offend still ran afoul of the regime.

The fear of even press that would give the dictatorship in Cuba the "benefit of the doubt" to say anything at all critical is understood based on past history. The question that remains is what does the Castro regime fear from a group of women dressed in white attending mass on Sunday and peacefully asking that their unjustly imprisoned husbands be freed?

The answer is found in that the regime is kept in power through a combination of censorship, instilling fear in the population by terrorizing and brutalizing those brave souls willing to speak out courageously. If the populace loses its fear then the regime is doomed.

The ghosts of the August 5, 1994 Maleconazo uprising still haunts the Castro regime and the possibility that one day soon a series of unforeseen events will lead to the downfall of the half century old dictatorship. Human rights defender Ernesto Cabrera Moreno was beaten down by regime agents wielding sticks and a machete on August 5, 2011 in the municipality of Caimanera, in the province of Guantánamo. The principal aggressor was William Valverde, member of the vigilance section of the municipal Committee in Defense of the Revolution. The end of the Castro dynasty has regime agents increasing their violence and brutality in a desperate gambit to hang on to power in Cuba.