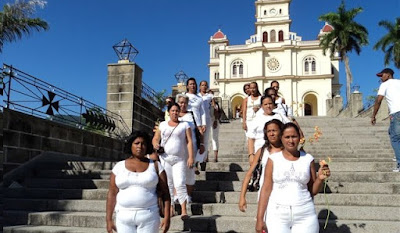 Ladies in White attacked again in Cuba by regime agents

It happened again this Sunday, August 14, 2011 despite the international press coverage over last Sunday's attacks. Cuban women brutalized by regime agents as they walked silently to attend Mass at the Cathedral in Santiago de Cuba. Human rights defender, Jose Daniel Ferrer Garcia, on twitter today reported that during the past 30 days the Ladies in White in eastern Cuba have been beaten on four consecutive Sundays by the Castros repressive forces. Despite the brutal beatings and detentions Jose Daniel was able to report that the Ladies in White have maintained their nonviolent discipline and courage and observed that "only three women made it to Mass at the Cathedral in Santiago. They agreed that Monsignor D. García gave a good homily and criticized the violence. The brutality has not gone unnoticed and the Irish human rights organization Frontline has called on people of goodwill to take action. Their call to action is reproduced below:

Several members of human rights organisations Damas de Blanco (Ladies in White) were assaulted by pro-Government groups and police officers on 7 August 2011 in Santiago de Cuba and Palmarito de Cauto in the eastern province of Cuba. Similar attacks have taken place each Sunday since mid-July, as members of Damas de Blanco have been leaving mass throughout the province of Santiago de Cuba. Damas de Blanco is a human rights organisation which was established in 2003 in Havana by a group of women demanding the release of political prisoners in Cuba.In 2005, Damas de Blanco was awarded the Sakharov Prize for freedom of conscience by the European Parliament.

On 7 August 2011, at approximately 11.00 am, pro-Government groups armed with steel bars and stones, as well as some members of the Ministry of the Interior, gathered outside the cathedral in Santiago de Cuba waiting for members of Damas de Blanco to leave following Sunday mass. The women had planned a peaceful march through the streets of Santiago de Cuba, holding flowers, calling for the release of political prisoners. Loud music and pro-Government propaganda was played from loudspeakers in the area.

Police officers, led by Lieutenant Colonel Elliott, reportedly cut off access to the area immediately surrounding the cathedral. The group of women was followed by the gang, who insulted and threatened them before forcing them onto a police bus which was driven to a nearby city, Palma Soriano, where some of the women lived. From there some of the women continued on to another town, Palmarito del Cauto, where they tried to stage a vigil however this was attacked by pro-Government gangs using iron bars and rocks. At least eight persons were hospitalised following the attack in Palmarito del Cauto and required stitches for their wounds.

According to the information received, later on the 7 August, the home of former political prisoner, José Daniel Ferrer García, where a group of human rights defenders had gathered, and the home of human rights defender Maximiliano Sánchez, were attacked by a pro-Government gang. It is reported that at least six persons required medical attention as result of injuries sustained during the attack, including member of Damas de Blanco and wife of José Daniel Ferrer García, Belkis Cantillo, and their 6-year old daughter. Doctors were reportedly instructed by police officers to refuse to provide medical certificates to the wounded which would serve as proof that violence had been perpetrated against them.

It is reported that the Government blocked the phone lines of those involved in the protest following the violence making it impossible for them to communicate with each other over the telephone.

On 8 August 2011, spokesperson for Damas de Blanco, Ms Laura Pollán, publicly denounced the violence perpetrated against members of the organisation and requested that Cardinal Jaime Ortega act as an intermediary between the Government and the organisation. Another member of Damas de Blanco, Ms Aymé Garcés, described publicly how she had been assaulted by the police.

It was also reported that on 5 August 2011, human rights defender Ernesto Cabrera Moreno was attacked, in the city of Caimanera, by a pro-Government group using machetes. The human rights defender remains in hospital being treated for injuries to his head and body. Ernesto Cabrera Moreno is a member of the Movimiento, Resistencia, y Democracia (Movement, Resistence and Democracy) organisation.

On 24 July 2011, a group of women from Damas de Blanco were assaulted as they were leaving the Virgin of Charity shrine in El Cobre, located outside Santiago. A week later on 31 July 2011 a similar attack took place on another group of women leaving a church in Palma Soriano.

Since 2004, Damas de Blanco have marched in silence through Havana dressed in white, and carrying white flags, demanding the release of political prisoners. The Cuban State Security Department has reportedly issued several threats against members of Damas de Blanco and attempted to blackmail their family members in Cuban prisons. Attempts by women to hold similar protests in other areas of Cuba have been violently put down by the Government.