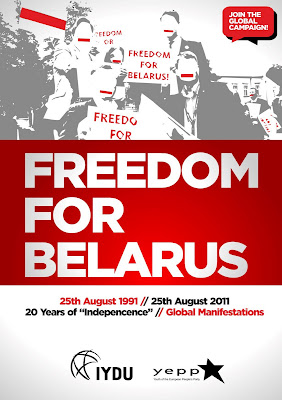 It was twenty years ago today that Belarus achieved its independence from the Soviet Union after more than 7 decades. Nevertheless, this day is not cause for celebration because for the majority of that time and currently the people of Belarus have been subjected to what today is the last dictatorship in Europe under the autocratic regime of Alexander Lukashenko. 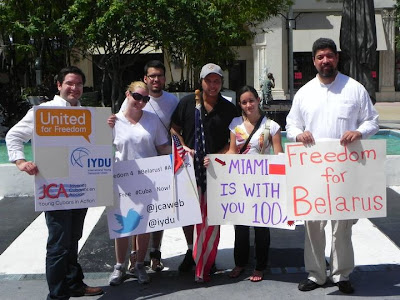 On August 21, 2011 a group of young people met on Lincoln Road Mall in South Beach to demonstrate their support for democratic activists in Belarus who suffer repression for trying to exercise their fundamental rights. Today in Belarus silent protests have been outlawed.

As a descendant of Cubans whose homeland has suffered under a brutal dictatorship for more than a half century the repression suffered by the Belarusians is all too familiar. On the same day that we marched through the heart of Miami Beach and educated bystanders on what is taking place in Belarus, in Cuba the Ladies in White were being brutalized by Castro’s state security agents to block them from attending mass at the local cathedral and peacefully marching in a public space.

Yesterday video emerged of four Cuban women nonviolently demonstrating on the capitol steps in Havana, Cuba calling for an end to the dictatorship and a democratic Cuba they were detained and beaten up by Cuban state security. Although separated by language and distance the brutal repression against nonviolent activists is unacceptable whether it is in Belarus, China, Cuba, Iran, Saudi Arabia, Sri Lanka, Syria, Tibet, Venezuela or elsewhere. The tyrants are working together to perfect their respective tyrannies and human rights defenders must join together in resisting them. It is for that reason that we engaged in a demonstration of solidarity with the democrats in Belarus and salute all those around the world today engaged in actions in their support.

Please today, take action for a human rights defender unjustly imprisoned in Belarus. His name is Ales Bialatski and Amnesty International has an urgent action to obtain his release.