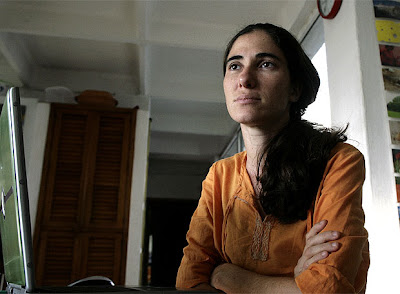 Cuban blogger blocked from travelling to film premiere in Brazil

by Amnesty International
The Cuban government must reform an arbitrary exit permit scheme that affects all Cubans and is used to punish freedom of expression, Amnesty International said today after a prominent blogger was again blocked from travelling abroad. On Friday, Cuba’s migration authorities denied blogger and activist Yoani Sánchez an exit permit (white card or tarjeta blanca) for the 19th time in four years. As on previous occasions, no reason was given for the decision.The well-known author of Generación Y had been invited to speak at the premiere screening in Brazil’s Bahía state on 10 February of a documentary on freedom of expression in Cuba and Honduras. Brazil had already issued her a visa to enter the country. “The Cuban government’s repeated denial of exit permits to critics like Yoani Sánchez can only be seen as retaliation for the expression of their legitimate political views and activism,” said Javier Zúñiga, Special Advisor to Amnesty International.“Those fighting for freedom of expression, association, and movement must be authorized to leave and re-enter the country without arbitrary restrictions, and the Cuban authorities must end other tactics used to clamp down on peaceful dissent.”

Cuban President Raúl Castro has yet to follow through on changes to migration policies promised as part of a series of reforms announced in 2011. Yoaní Sánchez’s blog covers daily life on the island and the many restrictions placed on Cubans’ enjoyment of political and civil rights. Her peaceful political activism is highlighted in Brazilian filmmaker Dado Galvão’s new documentary Connection Cuba-Honduras. After the Cuban authorities’ most recent decision to prevent her from travelling, Yoani Sánchez expressed her frustration via Twitter: “I feel like a hostage kidnapped by someone who won’t listen or give explanations. If all this effort helps to shine a light on the migratory absurdity we Cubans are trapped in, then it was worth it.”The blogger’s work has earned her numerous prizes overseas, but the Cuban authorities have repeatedly blocked her from attending the award ceremonies. On 20 January, Amnesty International wrote to Brazil’s Minister of External Relations, urging him to intervene to ensure Yoani Sánchez would be allowed to leave Cuba. On a state visit to Cuba last week, Brazilian President Dilma Rousseff mentioned that the blogger had been granted a visa to enter Brazil, but fell short of pressing the Cuban government to allow her to leave.
http://www.amnesty.org/en/news/cuban-blogger-blocked-travelling-film-premiere-brazil-2012-02-06