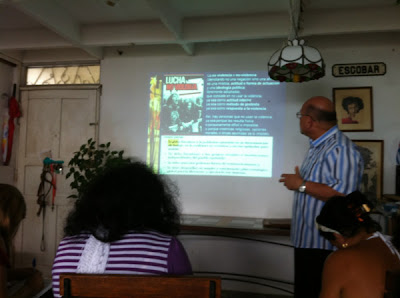 Castro agents mounted a huge operation with political police and mobs to prevent 20 women in Havana, Cuba from taking part in a workshop on nonviolence. Nevertheless six of the women managed to get through and the workshop went on. Above Dagoberto Valdez is giving a presentation on nonviolent civic struggle.

The Castro regime fears knowledge of nonviolent civic action being delivered to Cuban activists. It relies on the discourse of war, hatred and incitement to violence to maintain power. The dictatorship knows that nonviolent civic resistance is an existential threat to tyrannical totalitarian regimes because it empowers people and assists them in overcoming their fears.

The dictatorship should be afraid.
Posted by John Suarez at 6:29 PM