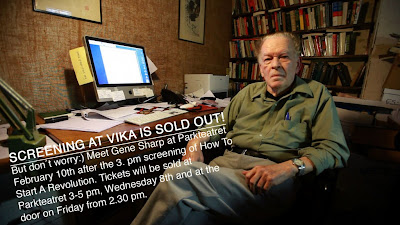 Gene Sharp turned 84 on January 21. At a time in his life when most are enjoying their retirement, Gene is on the move spreading the word on strategic nonviolence and working at the Albert Einstein Institution. On Tuesday, February 7, 2012 he will be speaking at the Documentary Film Festival: Human Rights Human Wrongs in Oslo, following the sold out Norway premiere screening of How to Start a Revolution. There is also a second opportunity to watch the documentary by Ruaridh Arrow and meet Gene Sharp on Friday, February 10, 2012 at 3:00pm.

"Maintain non-violence, do not organise soldiers to use violence against the remaining army. That is suicidal. That becomes a tool - that is what the government would want you to do". ... "Use the mutinous soldiers to persuade the rest of the soldiers also to mutiny - take the army away then the regime will come tumbling down."

In another interview in the United Kingdom on the BBC News program HARDtalk on January 30, 2012 Dr. Sharp said that "using violence is a stupid decision." 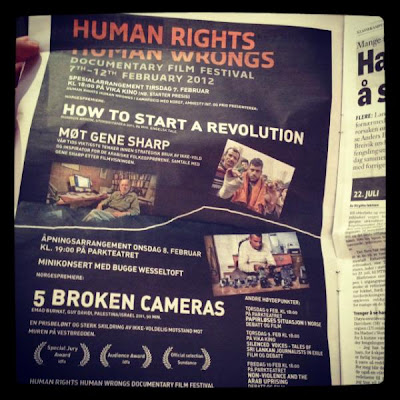 Full page advert of the Human Rights film festival
History backs up Gene's assertion. University Academics Maria J. Stephan and Erica Chenoweth in their 2008 study "Why Civil Resistance Works: The Strategic Logic on Nonviolent Conflict" compared the outcomes of 323 nonviolent and violent resistance campaigns from 1900 to 2006. They found that major nonviolent campaigns have achieved success 53 percent of the time, compared with just under half that at 26 percent for violent resistance campaigns. Finally there study also suggests “that nonviolent campaigns are more likely than violent campaigns to succeed in the face of brutal repression.” This also depends on the nonviolent opposition movement having a strategic vision and maintaining its non-violent posture even under the worse repression.
Narcotics Anonymous in a 1981 publication they called "the basic text" observed that "Insanity is repeating the same mistakes and expecting different results." The same holds true for both drug addicts and those who rely on violence. History has demonstrated that nonviolence is a superior method of struggle that offers both a greater chance for success and less death and destruction. In September 2011, Gene Sharp spoke at Zeitgeist of the Americas and following his presentation the moderator said that for Every Egypt and Tunisia were nonviolence worked there was a Libya and Syria where it had not. Sharp responded saying that was an oversimplification and went on to give the following response.
Don't lump Syria and Libya together

"...Syria is very different from Libya. In Libya you had very quickly a military intervention. One of Qaddafi's generals with his troops and guns changed sides supposedly. I have a suspicion that he was an extreme agent provocateur and he was later killed in the rebel camp. For months foreign military assistance was brought by NATO, and the United States, France and all the rest. That wasn't nonviolence certainly anymore. That kind of thing ...Violence can wreck a nonviolent struggle movement. So that is not a good example."
"In Syria they are still going. I have been startled and amazed at the not only the nonviolent discipline . Only scattered violence in the midst of all kinds of killing almost every day by people who say 'we are not afraid.' This is what Gandhi was trying to tell the Indians 'don't be afraid, cast off fear'. I always honestly thought he was being a little romantic and naive. The Syrians and others have said 'we are not afraid anymore' and that is what terrifies the dictators. Thats why the brutality is so great in Syria. They think that if only they are brutal enough the resistance will collapse. So far the dictators have been proved wrong. But this is not easy. If you have people within your movement who do not keep discipline, who decide to do this or that, or you don't have a plan, you don't have a strategy, how the hell are you going to win? And yet people try to do that all the time. They have to learn what makes it effective, and what makes it fail and do the things that make it successful."

Later on during the question and answer period Gene Sharp highlights the reality that those in power will do anything to stay in power and that means that you have to be as prepared as possible in engaging in a nonviolent struggle.

"You have to learn how to do it skillfully. If you are going to fight a war violently you don't go to all the neighborhood bars and get all the guys out there and say lets go fight a war but thats about the way nonviolent struggle has been conducted over the centuries. People were improvising. They didn't know what the hell they were doing. What would make it effective? What should they be aware of? Who was this guy who was urging violence? They didn't know he was a tool of the political police. This happened in the Russian empire ... and repeatedly. It also happened I am told with the Gestapo doing that. Dictators and rulers who fear the power of people will do their damndest to defeat it and you have to know how to be smarter than they are and more courageous and more skilled in what you do."

The full interview is available below:

There is more than a century of evidence that nonviolence is more effective then violence with better long term results yet the cult of violence remains. Professor Erica Chenoweth speaking at Dartmouth University offers an explanation, reported in the student paper The Dartmouth, that still asks why?: “Often violence is serving very personal functions for people. “Rational insurgents should be able to substitute the method that works for one that doesn’t, but people are hanging onto violence for dear life, and I don’t know why.”
One could say it is an example of mass insanity. Hopefully its survivable.