"Let me tell you China, Russia and Cuba do not belong as world judges on human rights when they not only enable mass murder in Syria but also systematically violate the human rights of their own citizens. It's a sick joke they shouldn't be there." - Hillel Neuer of UN Watch on CTV News on February 28, 2012 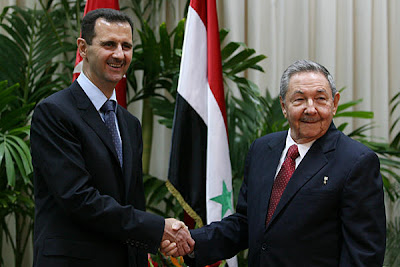 Bashar al-Assad and Raul Castro
The regime in Cuba has a long and shameful history with regards to the United Nations Human Rights Council without even mentioning its human rights record on the island which is dismal. The 19th session of the UNHRC began on Monday, February 27, 2012 in Geneva, Switzerland. Nevertheless during the first 48 hours of the session the regime's dismal behavior continues unchanged. The Castro brothers over the past half century have defended genocidal regimes of all ideological stripes in Argentina, China, Ethiopia, Libya, Sri Lanka, Syria and Zimbabwe just to list a few. They are also enemies of free expression. They are adding more chapters of infamy to the regime's long and dark record of violating human rights and making common cause with the worse human rights violators on the planet. 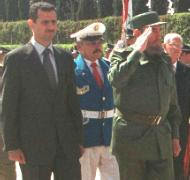 First the Castro regime's diplomatic delegation was defending the murderous government in Syria as it carried out a ground assault on the Syrian city of Homs the Castro regime boycotted a special hearing then later at the ongoing 19th Session of the UN Human Rights Council tacitly tolerated the slaughter on the grounds of sovereignty. The Castro brothers have a long and special relationship with the Assad family in Syria.

Defending the regime in Syria that has since March 2011 slaughtered more than 7,500 of its own people should dispel any illusions that the Raul Castro regime is nothing more than a continuation of the brutal regime his brother established with him in 1959 and like the Assads wish to perpetuate regardless the costs in human lives. When the High Commissioner for Human Rights was addressing the situation in Syria the Cuban dictatorship's diplomats interrupted her raising a point of order.

Secondly, the Castro regime's diplomats used a point of order to also interrupt the discussion on freedom of expression on the internet. Reporters Without Borders listed the government of Cuba as one of 13 enemies of the internet. According to wikileaks, Raul Castro's regime is terrified of bloggers.


Hillel Neuer of UN Watch on CTV on February 28, 2012 on atrocities in Syria and Cuban regime's enabling of the slaughter there.

Hillel Neuer, the executive director of UN Watch (a non-governmental organization established in 1993 based in Geneva whose mandate is to monitor the performance of the United Nations by the yardstick of its own Charter), in an interview on CTV addressing the atrocities committed by the Assad regime in Syria also touched on the nefarious role of the Cuban government on the UN Human Rights Council and his organization's call for China, Russia and Cuba to be taken off the Council explaining that:

"[O]n these issues you have to lead the way, speak the truth and you never know when it will be implemented. Let me tell you China, Russia and Cuba do not belong as world judges on human rights when they not only enable mass murder in Syria but also systematically violate the human rights of their own citizens. It's a sick joke they shouldn't be there."

The Castro regime's behavior is garnering attention and outrage. Inside of Cuba voices are speaking out through cyberspace and denouncing the government's behavior. One of these voices Yoani Sanchez, on February 29, 2012 over Twitter expressed: I feel profound shame at the attitude taken by the government of Cuba to what happens to the people of Syria. -
Outside of Cuba, the actress and humanitarian Mia Farrow on February 28, 2012 over Twitter took the Cuban regime's argument in favor of the Syrian regime to task tweeting: Sovereignty MUST come with responsibilities MT @UNWatch: #Cuba: Reiterate rejection of any attempt to undermine sovereignty of Syria.

The times are changing and they do not favor totalitarian regimes.