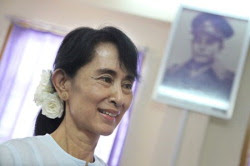 Aung San Suu Kyi is seen at the National League for Democracy headquarters in Yangon, Burma, in this Oct. 27, 2011 file photo. In the background, is a portrait of her father, General Aung San. (Mainichi)

When I decided that the first Letter from Burma of 2012 should be about the late Vaclav Havel, I wondered how I should entitle the article. My thoughts immediately went to the little red heart he usually drew as part of his signature. Perhaps I should write about him as "The Heart President" or "The Heart Leader" or "The Dissident with A Heart" or "The Intellectual with A Heart?" In the end I decided that the name Vaclav Havel alone was more potent and meaningful than any fancy title I could think up.

It was during the first year of my house arrest, 1989, that the name of Vaclav Havel became familiar to me. The Velvet Revolution, the Civic Forum, the electoral victory that turned the premier dissident of Czechoslovakia into the first President of the newly democratic republic: I learnt about it all from my small portable radio and shared in the euphoria of political transformation in that far off land. However, I did not realize at that time that Vaclav Havel would become a personal friend.

It is a little strange to speak of a man I had never met and with whom I had barely corresponded as a personal friend. It was his vigorous and warm personality and his total commitment to the support of movements for democracy and human rights the world over that made his friendship so real and vibrant and made me feel we were linked to one another by close ties of understanding. He nominated me for the Nobel Peace Prize in 1991 because he believed it would help to focus international attention on our struggle. Had he allowed his name to be put forward as a candidate that year I am convinced he would have been the chosen laureate. He surely valued the Nobel Peace Prize, for he would not have wanted to give to the cause of democracy and human rights something on which he did not value himself. But it was a matter of chivalry: "Their need is greater than mine."

When my family were permitted to visit me in 1992, my husband brought me a copy of The Power of the Powerless. I have just flicked quickly through the pages of this now shabby, well-thumbed volume and reread some of the phrases I underlined in the book. "... an examination of the potential of the 'powerless' -- can only begin with an examination of the nature of power in the circumstances in which these powerless people operate ..." "... freedom is indivisible ..." "... not standing up for the freedom of others, regardless of how remote their means of creativity or their attitude to life, meant surrendering one's own freedom ..." "A better system will not automatically create a better life. In fact the opposite is true: only by creating a better life can a better system be developed ..." Ideas that seem simple yet which enmesh with basic human aspirations only when formulated with clarity by an exceptional mind.

A high intellect is no substitute for a generous heart, and it is the latter that I appreciate most in Vaclav Havel. He was a rare dissident, one who did not forget fellow dissidents in remote parts of the world even after he became the Head of State of his own country. His heart was not only generous but appealingly light, expressing its solidarity with ordinary people everywhere in the simplest way. His To the Castle and Back begins with the words: "I've run away. I've run away to America. I've run away for two months with the whole family; that is, with Dasa and our two boxers, Sugar and her daughter Madlenka." The gleeful declaration of flight and the place (right at the heart of the family) that he accorded to his dogs drew me across miles and years into the warm circle of his home. How did a man so far from ordinary manage to retain the common touch?

Vaclav Havel spoke to me once on the telephone, about a year ago. He was already in poor health and his voice was weak but he managed to convey his joy at my release from house arrest and his concern for all of us who were still far from our democratic goal. Even in his final illness he did not forget us. The last letter he wrote to me was placed in my hands a few days after his death by one of his old friends, Mr. Sasakawa Yohei.

"Dear Friend," the letter began, "Over the years I sent you a number of letters inviting you to attend various international conferences and other events that I organized. I did it being perfectly aware that the chances of you attending are non-existent but I still did it out of principle and to remind the authorities that confiscated my letters to you that we constantly think of you and support you." The spirit with which he championed the cause of the oppressed had remained intact. His interest in our struggle, too, had continued strong: "Dear friend, I am following the recent developments in your country with a very, very cautious optimism." He ended his letter on a practical, modest note. "... if there is anything we can do to help -- for example -- and only if you wish -- to share some of our transformational experience with you we shall gladly do it."

I will feel the absence of my friend as we continue along the road he walked before us.